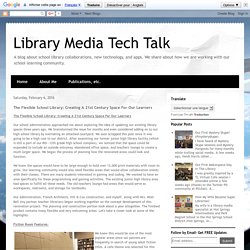 We brainstormed the issue for months and even considered adding on to our high school library by overtaking an attached courtyard. We soon scrapped this plan since it was going to be a high cost to our district. After examining our former junior high library facility (which is still a part of our 8th -12th grade high school complex), we noticed that the space could be expanded to include an outside entryway, abandoned office space, and teachers' lounge to create a much larger space. We began the process of planning how the renovated areas could look and function. We knew the spaces would have to be large enough to hold over 12,000 print materials with room to grow. Our administration, French Architects, Hill & Cox construction, and myself, along with Mrs. Fiction Room Features: Special Thanks. 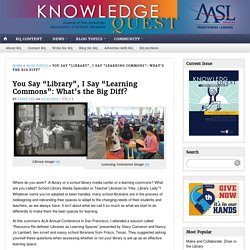 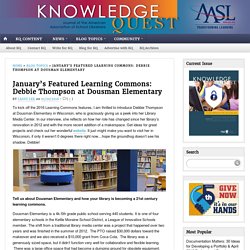 In our interview, she reflects on how her role has changed since her library’s renovation in 2012 and with the more recent addition of a makerspace. Get ideas for great projects and check out her wonderful website. It just might make you want to visit her in Wisconsin, if only it weren’t 0 degrees there right now…hope the groundhog doesn’t see his shadow, Debbie! Tell us about Dousman Elementary and how your library is becoming a 21st century learning commons. Dousman Elementary is a 4k-5th grade public school serving 440 students.

March's Featured Learning Commons: Shannon Robinson at The Morgan School. Imagine being hired for a new job in which you were tasked not only with transforming an old library space and collection but also with changing the whole school’s perception of the philosophy of how the space would be used. 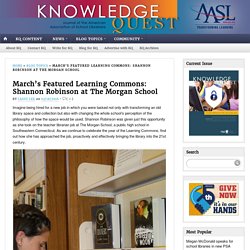 Shannon Robinson was given just this opportunity as she took on the teacher librarian job at The Morgan School, a public high school in Southeastern Connecticut. The Flexible School Library: Creating A 21st Century Space For Our Learners. What the Heck Is OER? When I hear the term OER, I don't automatically leap to "Open Educational Resources. 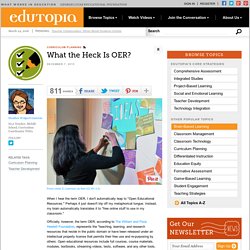 " Perhaps it just doesn't trip off my metaphorical tongue. Instead, my brain automatically translates it to "free online stuff to use in my classroom. " Officially, however, the term OER, according to The William and Flora Hewlett Foundation, represents the "teaching, learning, and research resources that reside in the public domain or have been released under an intellectual property license that permits their free use and re-purposing by others.

Open educational resources include full courses, course materials, modules, textbooks, streaming videos, tests, software, and any other tools, materials, or techniques used to support access to knowledge. " I like my definition better, but I will admit that both allow for a wide range of scenarios: Why Now? The OER movement has taken off for two main reasons: 1.

There are laws out there that demand equity for students regarding their textbooks and materials. 2. 1. Beth Holland: Transforming Libraries into Library Learning Commons or a Hogwarts Room of Requirement – QSLiN. If you’ve read the Harry Potter books, you may remember the magical Room of Requirement. 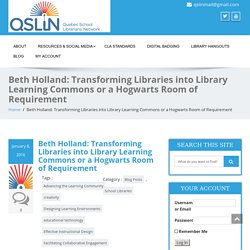 This is a room where any need can be met. According to Beth Holland, in the Cape Elizabeth Library Learning Commons ( a student looked at the new library learning commons and said to Library Information Technology Specialist, Jonathan Werner (@MaineSchoolTech), “You’ve given us a Room of Requirement!” This is the kind of excitement that a library learning commons can inspire. With information available 24-7 on computers and all sorts of devices, the librarian and the library learning commons are the people and spaces that help students make sense of all the information that they are retrieving. How A School Library Increased Student Use By 1,000 Percent. Re imagining the 21st Century School Library. KQ MarApr14 ClimbingtoExcellence. Learning Commons Video. School Libraries: Are They Relevant in the Age of Google? Over the past 10 years, the number of schools that have trained teacher-librarians has declined dramatically. 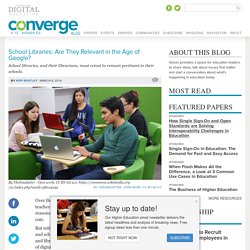 While many reasons for this drop exist, the primary culprit is school budget cuts. But with the advance of the Internet and e-books, many district and school leaders are asking questions: Do school libraries, and librarians, really matter? Have Google and the abundance of digital devices made libraries and librarians unnecessary? In our move to more personalized learning, what role do libraries play? And especially in times of shrinking school budgets, have libraries and librarians become unaffordable luxuries that are no longer an important part of what defines a “good school”?

These are fair questions, and librarians — and their libraries — must make a valid case for their ongoing existence. Dynamic public libraries are reinventing themselves to remain relevant to their communities. There are some great opportunities for the new school library. Digital Research Resources. Year of the Learning Commons. Learning Commons: the Center of Participatory Learning and School Improvement Continuing their long service to children, teens and teacher, teacher librarians are developing new ways to not only support the consumption of knowledge through great collections in many formats but are encouraging everyone to create knowledge in the new world of information, technology, and the challenges of school improvement. 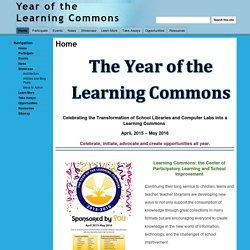 Major changes to traditional school libraries include the reinvention of physical space that meets the needs seeking a physical space that adapts to what they need at any given time. There is space for individuals, small groups and large groups who are using resources, making, building, creating, doing, and enjoying a very busy space that welcomes the use of many forms of technological devices.

Digital resources and collaborative learning happens 24/7 in the Virtual Learning Commons Where learners can link to opportunities and work with others across the world. ON LIBRARIES: From Library to Learning Commons – Hilda K. Weisburg. You have heard the term Learning Commons. 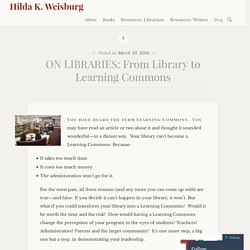 You may have read an article or two about it and thought it sounded wonderful—in a distant way. Your library can’t become a Learning Commons. Because: It takes too much time.It costs too much money.The administration won’t go for it. For the most part, all three reasons (and any more you can come up with) are true—and false. Some Reasons to Consider Let’s start with why you should want to make the transformation. Once again it is time to change perceptions first and then change reality. We are living in a participatory culture. Creating a Plan As the great American philosopher Yogi Berra said, “If you don’t know where you are going, you will wind up someplace else.”

While the article is an excellent start, you also need an incentive to keep you going. Don’t be intimidated by the pictures. Extreme Makeover!