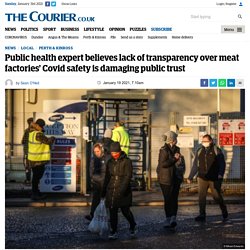 Professor Andrew Watterson, of the Occupational and Environmental Health Research Group at Stirling University believes outbreaks suggest workplaces are not Covid-safe and questioned why detailed information was not being made public by the Health and Safety Executive (HSE). © Supplied by Stirlin University He wants the body to reveal what checks and standards are being met during investigations and questioned why information was only being relayed through public health. Covid-19 cases at Coupar Angus chicken factory nearly double in five days Professor Watterson told The Courier: “The lack of transparency means the public, who it is important to keep informed during the pandemic, don’t know what exactly is going on nor does anyone else outside a workplace. Northam discusses vaccine transparency during COVID-19 briefing Wednesday; extends restrictions through Feb. 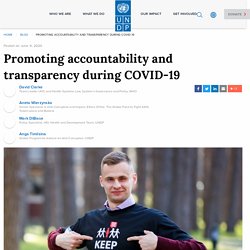 Even in ordinary times, research has shown that corruption in the health sector causes losses of US$455 billion per year and, according to OECD estimates, up to US$2 trillion of procurement costs could be lost to corruption. How do we consider this reality during a global pandemic, when there are increased opportunities for corruption to take place, while at the same time not compromising an effective public health response? Experience has shown that applying a risk-based prioritization framework is a crucial first step. Tailored to each context, the framework should determine which governance, transparency and accountability mechanisms must be integrated into all COVID-19 public health response planning and design.

Students Ask for More Transparency During Pandemic. College students say clearer communications with their institutions could improve learning during the COVID-19 pandemic that has limited most classes to online. 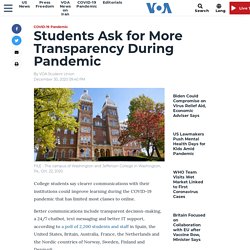 Better communications include transparent decision-making, a 24/7 chatbot, text messaging and better IT support, according to a poll of 2,200 students and staff in Spain, the United States, Britain, Australia, France, the Netherlands and the Nordic countries of Norway, Sweden, Finland and Denmark. While all students reported diminished trust with university leadership during the pandemic, students in the U.S., Britain and Spain reported the greatest amount of disconnect from their institutions. Students and staff also asked for testing for COVID-19 and personal protection equipment (PPE) such as masks.

Contact tracing was another measure students and staff said was important. To date, COVID-19 has killed more than 1.8 million people worldwide, including 341,000 in the U.S., according to Johns Hopkins University. UK govt admits showing misleading Covid-19 figures in Downing St. briefing after coming under fire for lack of data transparency — RT UK News. The British government has admitted to showing misleading daily Covid fatality projections in its televised coronavirus briefing last weekend, during which PM Boris Johnson announced a second national lockdown. 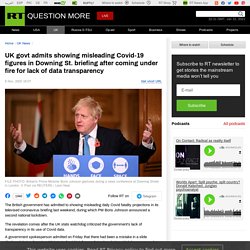 The revelation comes after the UK stats watchdog criticized the government’s lack of transparency in its use of Covid data. A government spokesperson admitted on Friday that there had been a mistake in a slide displayed during the prime Minister’s Covid briefing on Saturday, during which he announced a new nationwide lockdown for England. Also on rt.com Arrests & scuffles as Million Mask March staged in London despite Covid-19 lockdown The misleading figures in question related to projected daily fatalities in the run-up to Christmas. Under pressure, UK government releases NHS COVID data deals with big tech. Hours before facing court proceedings from openDemocracy over its massive NHS COVID-19 data deal with private tech firms, the UK government has caved to pressure and released all the contracts governing its deals with Amazon, Microsoft, Google, and controversial AI firms Faculty and Palantir. 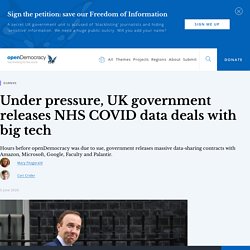 The contracts, released to openDemocracy and tech justice firm Foxglove today, reveal details of what has been described as an ‘unprecedented’ transfer of personal health information of millions of NHS users to these private tech firms. Significantly, the contracts reveal that the Dominic Cummings-linked firm Faculty is being paid more than £1m to provide AI services for the NHS. The documents also show that terms of that deal were changed after initial demands for transparency were made under the Freedom of Information Act. Over the past few weeks, MPs have asked questions in parliament about the controversial deals and over 14,000 people joined a call for transparency. 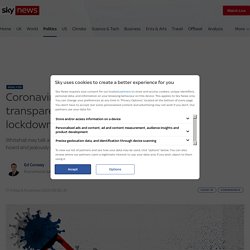 After all, the prime minister's decision to lock England down was taken because, as he put it, "the virus is spreading even faster than the reasonable worst case scenario of our scientific advisers". In other words, the reason England is back in lockdown - a decision of enormous consequence for tens of millions of people - ultimately comes down to a dataset. In one sense this is hardly unfamiliar; after all, COVID is both a public health episode and a data episode.

Only by understanding the numbers about how the disease spreads can we understand the risks it poses and the best course of action to respond to it. Yet here's the strange thing: as far as I can tell, the the latest published "reasonable worst case scenario" in October - dates back to May. Please use Chrome browser for a more accessible video player. Birmingham City University - Sign In.