Free Essential eBooks for Web Designers & Web Developers. There are thousands of books available for web designers and developers online. 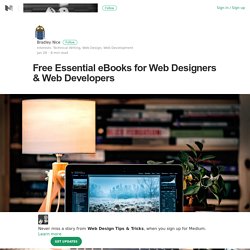 There has been no language, no point of discussion, or no trend that has not, at one time or another, been extensively explored and analyzed, and eventually published as an eBook. The great news is quite a lot of these books are available for free! And today I’ve collected my favorites for you! CSS & HTML Essential Learning Resilient Web Design By Jeremy Keith (HTML, EPUB, MOBI) Rather than being a guide to solid web design, Resilient Web Design has been written to highlight some of the approaches and techniques to web design that have proven to be resilient over the years. Adaptive Web Design By Aaron Gustafson (HTML) Adaptive Web Design delves into the origins of progressive enhancement, its philosophy, and mechanisms, and reveals the countless practical ways that you can apply progressive enhancement principles using HTML, CSS, and JavaScript. 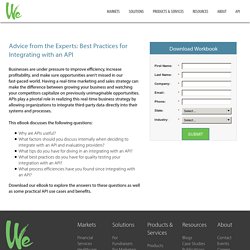 Having a real-time marketing and sales strategy can make the difference between growing your business and watching your competitors capitalize on previously unimaginable opportunities. APIs play a pivotal role in realizing this real-time business strategy by allowing organizations to integrate third-party data directly into their systems and processes. This eBook discusses the following questions: Why are APIs useful? Natural Language Processing with LUIS - SitePoint Premium. How to Use npm Scripts as Your Build Tool - Course by @elijahmanor. Your guide to Virtual Reality in the browser. RegExr: Learn, Build, & Test RegEx. RegexBuddy: Learn, Create, Understand, Test, Use and Save Regular Expression. Regex Tester - Javascript, PCRE, PHP. RegexMagic: Regular Expression Generator. MS Bots - SitePoint Premium. Published January 2017 You botter believe it, Microsoft are aiming for the Skypes The Microsoft Bot Framework (MBF) and the Cognitive Services APIs allow you to create powerful bots for multiple platforms in a simple way. 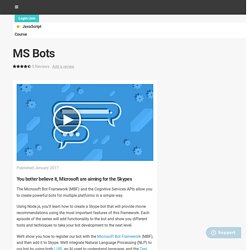 Using Node.js, you’ll learn how to create a Skype bot that will provide movie recommendations using the most important features of this framework. Creating a Slack Bot Using Node.js. This tutorial was originally posted by the author on his blog. 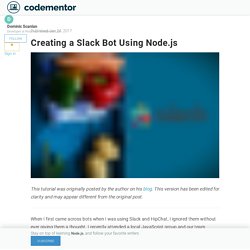 This version has been edited for clarity and may appear different from the original post. When I first came across bots when I was using Slack and HipChat, I ignored them without ever giving them a thought. I recently attended a local JavaScript group and our team exercise was to build a Slack Bot. This opened my eyes and I finally understood all the hype surrounding bots — trust me, I'm not the only one talking about bots. The bot that we're going to talk about in this tutorial knows how to find recipes for the list of ingredients you provide it with. Creating the bot in Slack In order to create the integration and generate the API token, you must log in to your team and be an administrator.

Once you've finished naming your bot, you must fill in API token in order to write the code later on. How to Build a Chatbot in Python and Deploy it to a VPS- Codementor. Open Source Software. GitHub - HospitalRun/hospitalrun-frontend: Ember front end for HospitalRun. Howdyai/botkit: Botkit is a toolkit for making bot applications. :computer: Guide: Computer Science and Web Development - comprehensive path - The Free Code Camp Forum. We've listened to everyone's feedback and made a ton of improvements to our forum. 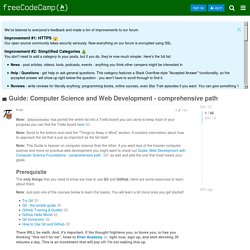 Improvement #1: HTTPS Our open source community takes security seriously. Now everything on our forum is encrypted using SSL. Surge VS GitHub Pages: How to deploy a create-react-app project. This past week I've been diving into React. 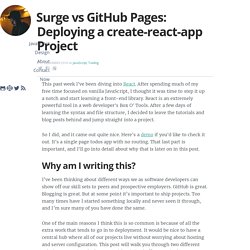 After spending much of my free time focused on vanilla JavaScript, I thought it was time to step it up a notch and start learning a front-end library. React is an extremely powerful tool in a web developer's Box O' Tools. After a few days of learning the syntax and file structure, I decided to leave the tutorials and blog posts behind and jump straight into a project.

So I did, and it came out quite nice. MongoDB, Redis, Elasticsearch, RethinkDB, PostgreSQL, MySQL, etcd, RabbitMQ & ScyllaDB Hosting with Compose. Kadira - Performance Monitoring Platform for Meteor. Ada-Developers-Academy/jump-start: This is Ada Developers Academy Jumpstart program which is intended for anyone who is interested in jump-starting their journey into coding.

eHealthApp. C and C ++ Galileo-chofrock/pyGalileo. Forum: Software & Documentation. Intel Galileo: Setting Up WiFi. The Intel Galileo comes with an Ethernet port, that you can use to connect to the internet. 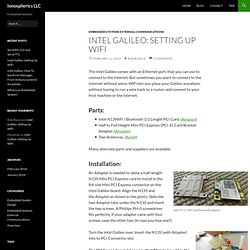 Ifconfig dhcp : Configure your DHCP from the command line. Linux/UNIX based systems offer an assortment of commands to their users to help them set up local networks as well as connect to the internet. 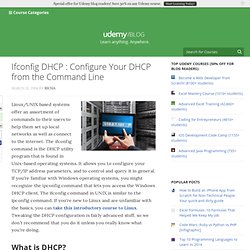 The ifconfig command is the DHCP utility program that is found in Unix-based operating systems. It allows you to configure your TCP/IP address parameters, and to control and query it in general. If you’re familiar with Windows operating systems, you might recognize the ipconfig command that lets you access the Windows DHCP client. The ifconfig command in UNIX is similar to the ipconfig command. Galileo board is not detected. Java on Yun? Top 10 Of The Best Free Web Services For Text-To-Speech Conversion. Create text-to-speech (TTS) podcast from RSS feed for iPod, iPhone, MP3 player and mobile phone.

Free Text to Speech SDK. The World Famous Index of Arduino & Freeduino Knowledge. Scuola - Intel® Galileo, first steps and the Internet of Things. Paraimpu is a social platform for the Internet (of Things). 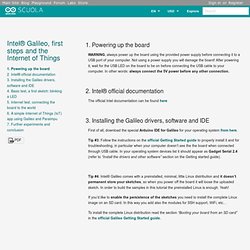 It allows you to quickly connect your smart things and boards, manage and interconnect them to create your IoT apps, also defining data transformation rules and to build your personal Internet of Things in a simplified, smart way. To experiment with this tutorial you need a Paraimpu account: you can create yours for free here. The free Paraimpu account has some limitations, for example every thing you will add can communicate once per minute with the system.

A Premium account type is coming and it will tear down this limitations. Anyway, the free account is enough for our experiments. IntelGalileo/IntelGalileoGPIO. Programming GPIO pins on Intel Galileo Description: Tutorial Level: INTERMEDIATE Intro This should work with either the Yocto or Debian setup. 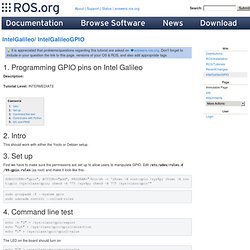 Intel Galileo - Programming GPIO From Linux - Malinov Family Web Presence. Most of GPIO capabilities of Galileo board are exposed through Linux Sysfs interface, and can be controlled using file based I/O. I will show how to use some of these capabilities using simple shell commands. Of course instead of shell you can implement I/O using file manipulations from your program written using your favorite programming language. Galileo Experiment Guide - learn.sparkfun.com.

Contributors: hello_techie Introduction A temperature sensor is exactly what it sounds like – a sensor used to measure ambient temperature. This particular sensor has three pins – a positive, a ground, and a signal. Before You Buy — Clay and Galileo. DHT workaround for Galileo and Galileo Gen2 usi... The main reason the DHT temperature and humidity sensor does not work with the Galileo is because of the tight requirements of one-wire device like the DHT11 and DHT22 sensors.

With just one wire, DHT and many other one-wire devices will not work with the Galileo because the Galileo takes too much time when switching a pin from one direction to another. This is because the Galileo uses IO expanders for the gpio that controls the pin direction and those IO expanders are connected to the Galileo via I2C. One way to get the Galileo to play well with one-wire devices is to use two wires. One dedicated for INPUT and another for OUTPUT. The workaround I am going to use only requires one extra hardware, a diode. For this example, pin2 is connected to the DHT11. Cathode of the diode is connected to pin3. Anode of the diode is connected to the DHT. I modified the Adafruit DHT library to work with the Galileo using two pins which I have attached. Also attached the modified sketch example. Intel-NTU Connected Context Computing Center. Intel® Galileo is an Arduino-compatible application development board based on Intel® Quark X1000 SoC, which is a 32-bit Pentium-class application processor.

The hardware and software compatibilities to Arduino shields design makes Galileo a rapid prototyping platform for innovative algorithms and techniques. A light weight Yocto Project Linux was also released to run on Galileo; however, due to the nature of the light weight OS, the functions available are limited. In order to unleash the potential of Galileo, a full-featured Yocto Project Linux with standard software development kits (SDKs) is required.

In addition, Java plays an essential roles in many cross-platform applications. Intel Software Academic Program. Intel Software Academic Program. Analog Inputs for Raspberry Pi Using the MCP3008. Raspberry Pi Temperature and Light Sensor. Required 2 x DS18B20, 2 x 4.7k resistor The DS18B20 is a rather useful sensor because you can read more than one of them using the same GPIO pin. The Raspberry Pi is able to recognise the input from each separate sensor. This system is called “1-wire”, although the sensor still needs power and GND connections. Breadboarding Basics. The way a breadboard works is like this... There are red and blue rails for power (+ve, red) and ground (-ve, blue). How to: Create a Raspberry Pi weather station: Part 1. The Raspberry Pi has a number of features that make it ideal for real-world projects. It’s cheap, small and rugged, and it needs only a modest power supply.

How to Create a Simple Shell Script on Linux. Shell scripts are short programs that are written in a shell programming language and interpreted by a shell process. HaikuVM - A Java VM for ARDUINO and other micros using the leJOS runtime. Raspberry Pi Documentation. Adafruit/DHT-sensor-library. Futuretask java example. Java - Access restriction on class due to restriction on required library rt.jar? Sun.misc.Signal Usage, Examples, Demos and Tutorials. Pulse Sensor - SEN-11574. Wireless Security Camera with the Arduino Yun. Ever saw these wireless security cameras that you can buy off the shelf? These are devices that you can setup somewhere in your home or outside, connect to your WiFi network, and then access the video stream from anywhere. However, they are usually using the interface given by the manufacturer, which means you are quite limited with what you can do with your camera. In this project, we are going to build our own DIY version of such devices.