About Time. 20 great movies according to movie lovers. These movies aren’t as widely known as the major blockbusters, but millions of cinema-lovers around the world have nevertheless flocked to watch them — and enjoyed what they saw immensely. 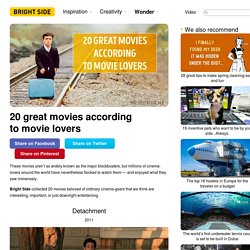 Bright Side collected 20 movies beloved of ordinary cinema-goers that we think are interesting, important, or just downright entertaining. Detachment imdb © Appian Way An absorbing movie about a teacher of English literature who substitutes for permanent teachers in poor urban areas. The life of the school that we see is stark and often upsetting, and the main character goes through pretty hard times, but he nevertheless tries to overcome difficulties and inspires his pupils, becoming the favorite school teacher. The World’s Fastest Indian © New Zealand Film Commission This movie charts the life of a famous New Zealand man called Burt Munro, who spent decades turning his favorite 1920 motorcycle with a maximum speed of 58 m/h into a racing machine capable of setting a world speed record. 15 incredibly positive movies that are sure to motivate you. Different movies appeal to different moods and personalities. 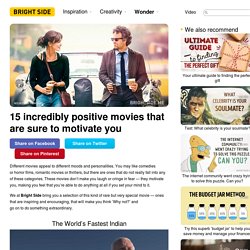 You may like comedies or horror films, romantic movies or thrillers, but there are ones that do not really fall into any of these categories. These movies don’t make you laugh or cringe in fear — they motivate you, making you feel that you’re able to do anything at all if you set your mind to it. We at Bright Side bring you a selection of this kind of rare but very special movie — ones that are inspiring and encouraging, that will make you think ’Why not?’ And go on to do something extraordinary. The World’s Fastest Indian. 10 filme incredibile pe care orice femeie ar trebui să le vadă (singură) Sunt unele filme pe care orice femeie trebuie să le vadă măcar o dată în viață. 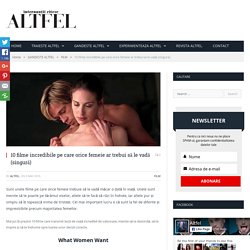 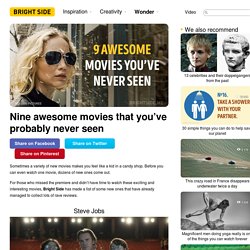 Before you can even watch one movie, dozens of new ones come out. For those who missed the premiere and didn’t have time to watch these exciting and interesting movies, Bright Side has made a list of some new ones that have already managed to collect lots of rave reviews. Steve Jobs © Universal Pictures This is the life story of one of the most brilliant minds of the world whose name is familiar to everyone. The Hateful Eight © The Weinstein Company LLC. Ten essential movies that will show you the way to happiness. Happiness can come in different forms. 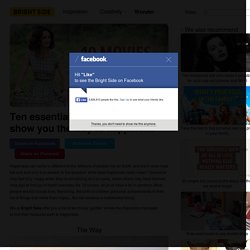 Millions of people live on Earth, and we’ll never hear the one and only true answer to the question: what does happiness really mean? Someone may feel truly happy when they’re socializing at a fun party, while others may have learned long ago to find joy in harsh everyday life. Of course, all of us have a lot in common. Most people would include love, friendship, the birth of children, personal achievements in their list of things that make them happy...But life remains a multifaceted thing. 300+ Mind Expanding Documentaries. Source: www.diygenius.com | Original Post Date: January 12, 2014 – I watch a lot of documentaries. 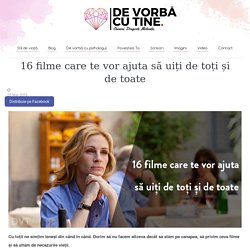 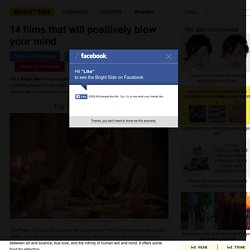 After watching these again and again, you’ll certainly feel recharged and reconnected to the universe. 11 brilliant movies about great people and their secrets. Extraordinary people have always been the driving force behind the progress of style, society, and state affairs. 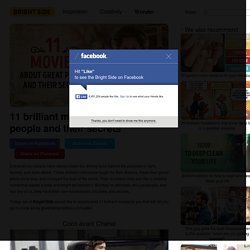 These brilliant individuals fought for their dreams, made their grand plans come true, and changed the face of the world. Their mundane lives are like a celestial comet that leaves a wide and bright tail behind it. But they’re ultimately still just people, and like any of us, they have their own weaknesses, troubles, and secrets. 20 utterly captivating movies about love. There are thousands — nay, millions — of romantic movies already out there, and yet people can’t stop making new ones every year. 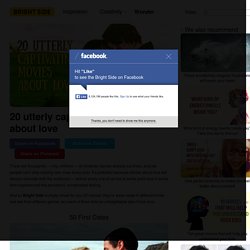 It’s probably because stories about love will always resonate with the audience — almost every one of us has at some point and in some form experienced this wonderful, complicated feeling. And so Bright Side lovingly chose for you 20 movies: they’re were made in different times and are from different genres, but each of them tells an unforgettable tale of true love. 50 First Dates Columbia Pictures Corporation. 15 incredible movies that will blow your mind. Everyone loves movies with confusing plots. Their unparalleled suspense and tension keeps us on our toes; they puzzle and confuse us, but keep us watching until the very end. They make us think, doubt and come up with our own conclusions.

Bright Side has put together a list of the most riveting and bewildering movies which we love to watch over and over again. Hide and Seek 20th Century Fox Film Corporation As a widower, psychiatrist David tries hard to get his life together in the wake of his wife’s suicide, whilst his daughter finds consolation in her imaginary friend ’Charlie’. Seven amazing films about real-life love stories which every couple should see. There’s a saying which many of us have heard: “Love like in the movies.“ But sometimes, real life is the best inspiration for film-makers interested in the subject of love. Incredible love stories happen for real in plenty of people’s lives — the kind of romances which no screenwriter could ever dream up. And sometimes, these experiences become the basis for great movies.

BRIGHT SIDE chose seven such movies for you. They’ve entered the hearts of so many people precisely because they all show us one thing — the meaning of true love. Eat Pray Love Columbia Pictures The movie: Elizabeth, a successful writer, suddenly realises that she’s not living the life she wants. Ten great movies with a jaw-dropping ending. Isn’t it awesome when the climax of a movie outright astonishes you? Today, we at Bright Side bring you ten more films that you can proudly put on your movie shelf and watch again and again. Hold on tight! Awake © GreeneStreet Films Inc. Clay and Sam are in love with each other, and nothing can ruin their feelings. 15 films that are definitely worth your time. Despite the fact that each of these films lasts a good couple of hours, they are easily watched in one breath due to the magnificent actors’ play and incredible directors’ vision.

And if you haven’t seen some of them, we recommend you do so ASAP. BRIGHT SIDE is convinced: you won’t regret it. The Green Mile Film duration: 189 minutes. Warner Bros. Ten superb movies that every woman should watch alone. There are movies that all women need to watch at least once in their lives. Some of these are dreamy, others are light and funny, while some can make you heart sick. However, the most important thing is that all of them are multi-faceted and unpredictable, exactly like the beautiful half of humanity itself. Bright Side presents 10 films that convey incredibly valuable life lessons and will entertain, inspire and guide you in making actual life decisions. Take your time and enjoy these movies! What Women Want ©Paramount Pictures. Ten fantastic movies which you’ve probably never heard of.

There are certain films which rarely fill up the cinema. Nevertheless, they deserve special attention. BrightSide.me has put together a list of 10 movies which we think are worth watching if you’re after something a bit more interesting. Snowpiercer kinopoisk This philosophical film from director Bong Joon-ho unfolds in the style of an action flick. Frank. The 20 greatest movies according to Quentin Tarantino. Tarantino’s obsession with cinematic history is something of a legend. Even before he became a renowned director, he worked at a video rental shop where he’d been spending his time devouring one movie after another. Now it’s been years since Tarantino’s distinctive style has won recognition from the public. He has even recently got his star on the Hollywood Walk of Fame! In one interview, Tarantino named twenty of his favorite films since 1992 — the year he embarked on his career. 18 spectacularly addictive miniseries you cannot help but love. Bridget Jones's Diary (2001)

20 astounding movies with an unpredictable climax. Unexpected plot twists and an unpredictable climax are elements you really want to see in any movie. It’s even better if the climax is constantly on your mind, making you wonder time and time again — how was it possible for a movie to end this way? The 15 best philosophical movies of the 21st century.

It’s the end of a movie, and the closing credits are slowly moving across the black screen. Someone sitting next to you has just woken up, someone headed to the exit is mumbling something to himself. Nine heart-warming movies for a family night in. Family movies are in a special genre that brings the whole family together for a warm and relaxing evening. 18 essential movies that help us understand what all women want. Female psychology is a tough nut to crack. 20 inspiring films about strong women. Most of us enjoy seeing Hollywood’s most beautiful stars shining on the big screen. We also love seeing these women as strong female leads are absolutely vital to the film. We here at Bright Side put together a list of 20 inspiring films about the most decisive and courageous women.

The Devil Wears Prada. 14 of the best relaxing movies to help you calm down after a rough day. 12 brilliant short movies you can watch in one go. The short motion picture is, perhaps, the most difficult genre in cinematography. As the time and the opportunities of the film are limited, the directors should grab the audience’s attention and convey the main idea in a way which is summed up by the phrase ’’say it quick, say it well.’’ You have to be really talented to skip the unimportant details and concentrate on the content itself. 19 profound psychological movies. 15 truly heart-warming movies based on true stories. 20 great movies that will make you feel alive. 18 extremely motivating movies. Ten incredible movies that will change you.

Ten essential movies you can’t miss seeing this year. The ten best movie roles played by the genius Alan Rickman. Ten superb movies which prove how important it is to never give up. Watch TV. Watch Movies.