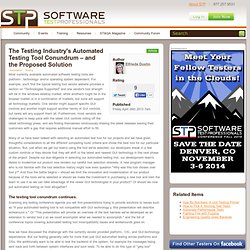 For example, you'll find the typical testing tool vendor website provides a section on "Technologies Supported" and one vendor's tool strength will be in the windows desktop market, while another's might be in the browser market or in a combination of markets, but none will support all technology markets. One vendor might support specific GUI controls and another might support another family of GUI controls, but rarely will any support them all. Furthermore, most vendors are challenged to keep pace with the latest GUI controls rolling off the latest technology press, and are finding themselves continuously chasing the latest releases leaving their customers with a gap that requires additional manual effort to fill.

The testing tool conundrum continues. Now we have discussed the challenge with the currently vendor provided platform-, OS-, and GUI-technology dependence. Maintainable Automated UI Tests. A few years ago I was very skeptical about automated UI testing and this skepticism was born out of a few failed attempts. 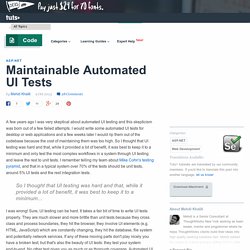 I would write some automated UI tests for desktop or web applications and a few weeks later I would rip them out of the codebase because the cost of maintaining them was too high. Streams & sdn. JUnit. TestO'Matic. Java Engine for Testing: Wiki: Home — Project Kenai. How to WebDriverWait. As WebDriver moves more towards being more of an API and less of a testing tool, functions that contained the logic to wait for pages such as wait_for_page_to_load() are being removed. 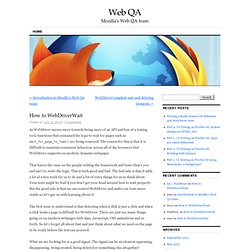 The reason for this is that it is difficult to maintain consistent behaviour across all of the browsers that WebDriver supports on modern, dynamic webpages. That leaves the onus on the people writing the framework and tests (that’s you and me!) To write the logic. This is both good and bad. Functional Testing with Selenium — Zurmo. Selenium Documentation — Selenium Documentation. Selenium Testing? Do Cross Browser Testing with Sauce Labs. FrontPage. Wiki Pages - selenium - Browser automation framework. Index of /maven2/org/seleniumhq/selenium/ About the Network. Selenium Testing? Do Cross Browser Testing with Sauce Labs - powered by FeedBurner. WebTest. ExpectedConditions. Resources. Firefinder for Firebug. First workflow-as-a-service exclusively for Google Apps. Seamlessly integrates with Google mail, docs, con. Selectors. 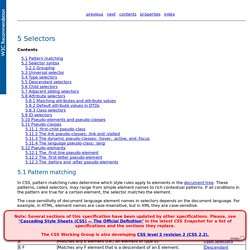 These patterns, called selectors, may range from simple element names to rich contextual patterns. If all conditions in the pattern are true for a certain element, the selector matches the element. The case-sensitivity of document language element names in selectors depends on the document language. The following table summarizes CSS 2.1 selector syntax: 5.2 Selector syntax simple selector is either a type selector or universal selector followed immediately by zero or more attribute selectors, ID selectors, or pseudo-classes, in any order.

Note: the terminology used here in CSS 2.1 is different from what is used in CSS3. Selector is a chain of one or more simple selectors separated by combinators. Combinators are: white space, ">", and "+". The elements of the document tree that match a selector are called subjects of the selector. 5.2.1 Grouping. A 93% Software Testing Blog by Alister Scott. As part of my talk last week at the Brisbane Testers Meetup, I gave a live demo (no pre-recorded or pre-written code) of writing a ruby testing framework from scratch in 15 minutes. 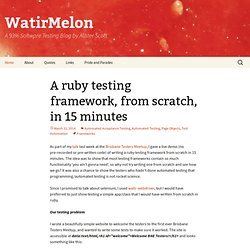 The idea was to show that most testing frameworks contain so much functionality ‘you ain’t gonna need’, so why not try writing one from scratch and see how we go? It was also a chance to show the testers who hadn’t done automated testing that programming/automated testing is not rocket science. Since I promised to talk about selenium, I used watir-webdriver, but I would have preferred to just show testing a simple app/class that I would have written from scratch in ruby. Our testing problem I wrote a beautifully simple website to welcome the testers to the first ever Brisbane Testers Meetup, and wanted to write some tests to make sure it worked. Adam Goucher » Blog Archive » The Selenium-IDE 1.x plugin API (Part 1) – Build and Preferences. Part of future success I see for Se-IDE is the ability for individuals, or more likely companies, to create plugins for it. 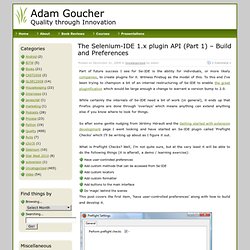 Witness Firebug as the model of this. To this end I’ve been trying to champion a bit of an internal restructuring of Se-IDE to enable the great pluginification which would be large enough a change to warrant a version bump to 2.0. FitNesse Tutorial. (99+) Selenium Users – Grupuri Google. XPath, CSS, DOM and Selenium: The Rosetta Stone. XPath, CSS, DOM and Selenium: The Rosetta Stone 04 April 2011 Some programming conventions are best represented in a chart. Nobody will claim that XPath or CSS are entirely intuitive, as they are terse, economical ways of identifying elements in a hierarchy. However, a chart with recipes and examples is a different matter.

Suddenly, apps like Selenium IDE are made easier. EMMA: Sample Reports. All sample reports below are accompanied by the exact steps that were used to produce them. 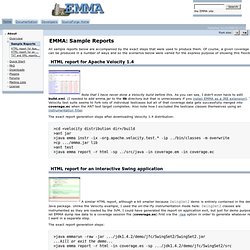 Of course, a given coverage report can be produced in a number of ways and so the scenarios below were varied for the express purpose of showing this flexibility. Note that I have never done a Velocity build before this. As you can see, I didn't even have to edit build.xml. (I needed to add emma.jar to the lib directory but that is unnecessary if you install EMMA as a JRE extension). The Velocity test suite seems to fork lots of individual testcases but all of that coverage data gets successfully merged into coverage.ec when the ANT test target completes. The exact report generation steps after downloading Velocity 1.4 distribution: Webtesting & Selenium (by Michael Wowro) CSS Selectors Reference. Selenium - Web Browser Automation.