Jingjinji. Jingjinji or Jing-Jin-Ji (JJJ), also known as Beijing-Tianjin-Hebei, is the national capital region of China. 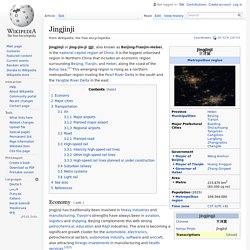 It is the biggest urbanised region in Northern China that includes an economic region surrounding Beijing, Tianjin, and Hebei, along the coast of the Bohai Sea.[1] This emerging region is rising as a northern metropolitan region rivaling the Pearl River Delta in the south and the Yangtze River Delta in the east. Economy[edit] Jingjinji has traditionally been involved in heavy industries and manufacturing. Tianjin's strengths have always been in aviation, logistics and shipping. Beijing complements this with strong petrochemical, education and R&D industries. The Chinese central government has made it a priority to integrate all the cities in the Bohai Bay rim and foster economic development. In recent decades, petroleum and natural gas deposits have been discovered in Jingjinji coast Bo Hai. Major cities[edit] How megacities compare: China plans a city 25 times the size of London. If we want to talk excitedly about Britain’s northern powerhouse, we should try not to think about China’s. 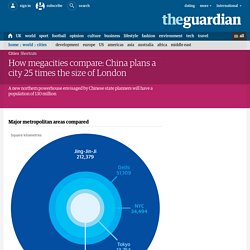 Both countries have a problem with their overweening south – the core of which is London in the UK, and is split between Chongqing, Guangzhou/Hong Kong and Shanghai in China. Jing-Jin-Ji: China’s new megalopolis, megaregion. Beijing National Stadium. 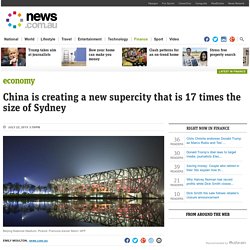 Picture: Francois-Xavier Marit / AFP IT’S called a megaregion, and, as the name suggests, it’s really big. Jing-Jin-Ji in China is so big it’s estimated to be the size of 17 Sydneys and, once complete, will be home to 130 million people. But this megalopolis is not a new supercity that has organically emerged from the Chinese countryside. It’s actually three very large cities that are being forced to merge together to, bizarrely, reduce the size of one of them: Beijing. While the massive project, which will see Beijing, the port city of Tianjin and the Hebei hinterland region connected by high speed rail, began two years ago, Chinese authorities have been talking about creating it for more than a decade. Over population, traffic congestion and high levels of air pollution have forced Chinese authorities to devise a new way of dealing with the growing problems, according to University of Sydney associate professor Duanfang Lu.

“It doesn’t make sense. Featured Video. The Rise Of China's Megalopolis: Jing-Jin-Ji And The Evolution Of Megacities. China's megacities are not a new phenomenon. 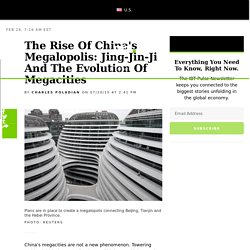 Towering residential blocks, sprawling lanes of highways, high-speed rail tracks and millions of residents standing shoulder to shoulder. There's Beijing, Shanghai, Shenzhen, Chongqing and Tianjin, and China has announced plans to create a new megalopolis that will connect three of the largest metropolitan cities in a region that's roughly the size of Kansas. Say hello to Jing-Jin-Ji. Jing-Jin-Ji will connect Beijing, Tianjin and the Hebei Province to form a megalopolis to ease the demands of the growing population, according to the New York Times. Beijing is home to 21.5 million residents while Tianjin numbers 14.7 million. Tianjin is a megacity that would be integrated into the Jing-Jin-Ji province. There are two parks that don't have enough space for the number of people who want to enjoy a weekend outdoors.

The Peal River Delta megalopolis connects large cities like Shenzhen, Guangzhou and Macau. The business area in Guangzhou. Beijing, Tianjin and Hebei take different approaches to beating smog. The governments of Beijing, Tianjin and Hebei province - known also as Jing-Jin-Ji - may have their differences in approach to regional integration, but the one thing not in dispute is the need to tackle the region's chronic air pollution. 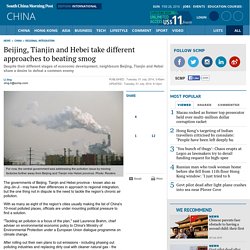 With as many as eight of the region's cities usually making the list of China's 10-most polluted places, officials are under mounting political pressure to find a solution. "Tackling air pollution is a focus of the plan," said Laurence Brahm, chief adviser on environmental economic policy to China's Ministry of Environmental Protection under a European Union dialogue programme on climate change. After rolling out their own plans to cut emissions - including phasing out polluting industries and replacing dirty coal with cleaner natural gas - the three local governments also agreed that the solution required a concerted joint approach, as pollution pays no respect to administrative boundaries.

Initial results have been promising. The Evolving Urban Form: Jing-Jin-Ji (Dispersing Beijing) China's cities continue to add population at a rapid rate, despite a significant slowdown in population growth. 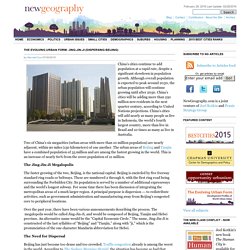 Although overall population is expected to peak around 2030, the urban population will continue growing until after 2050. China’s cities will be adding more than 250 million new residents in the next quarter century, according to United Nations projections. China's cities will add nearly as many people as live in Indonesia, the world's fourth largest country, more than live in Brazil and 10 times as many as live in Australia.

Two of China's six megacities (urban areas with more than 10 million population) are nearly adjacent, within 90 miles (150 kilometers) of one another. The urban areas of Beijing and Tianjin have a combined population of 35 million and are among the fastest growing in the world. Project Jing-Jin-Ji, how China wants to merge Beijing, Tianjin and Hebei into a supercity with 130 million citizens. For the past several years, our society functions on the logic “bigger is better”. 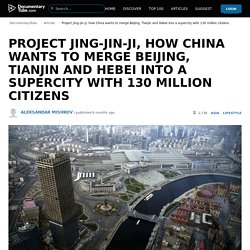 That same logic is applied for the new megalopolis, project Jing-Jin-Ji. The new city should unite Beijing, Tianjin and the Hebei region into one supercity. And while it is one thing to dream big, the Chinese government is actually investing in this super structure that defies sense, reason and logic. The land surface of the new city will cover 212,000 square kilometers and host 130 million citizens. While the two cities and the Hebei region are primary, there will also be secondary, small cities included in the project. The project started in 2013, and the goal is to have high-speed railways between all cities by 2020. «Jing-Jin-Ji», le projet fou d'une mégalopole de 100 millions d'habitants autour de Pékin. 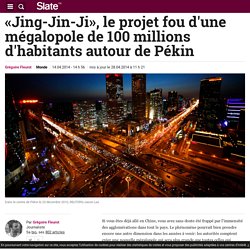