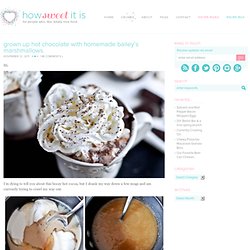 I’m dying to tell you about this boozy hot cocoa, but I drank my way down a few mugs and am currently trying to crawl my way out. Like everything else this week, it wasn’t my idea… a bunch of you [like Allison] looked at me [virtually] as if I was insane for not putting the marshmallow vodka in hot chocolate. I’m so glad I have smart invisible internet friends! No more words. Except… GET IT. Print Save Grown Up Hot Chocolate Yield: serves about 6 Total Time: 15 minutes (without marshmallows) Ingredients: 3 cups whole milk 1 1/2 cups cream or half and half 1/4 cup cocoa powder (I used Hershey’s Special Dark) 4 ounces milk chocolate, chopped 1/3 cup sugar 1/4 teaspoon cinnamon 1 teaspoon vanilla extract pinch of salt 4-6 ounces of marshmallow (or vanilla, cake, whipped cream) vodka Directions: In a large bowl, mix together cocoa powder, sugar, cinnamon and salt.

Remove from heat and whisk in vodka, or add to each glass right before serving. Pumpkin Pie Fudge Brownie Bars. Last week I met a brownie. 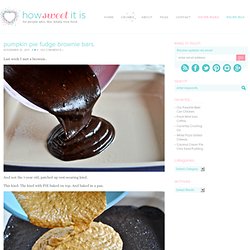 And not the 7-year old, patched up vest-wearing kind. This kind. The kind with PIE baked on top. And baked in a pan. S'moretini Shooters. Me again. 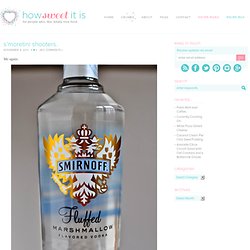 Here to convince you that you need yet another trendy, insanely-flavored bottle of booze. Rich homemade ricotta. A few years ago, I made ricotta for the first time. 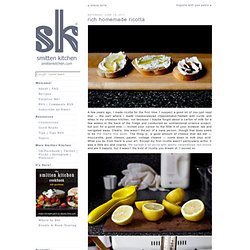 I suspect a good lot of you just read that — the part where I made cheese/played cheesemaker/fiddled with curds and whey in my shoebox kitchen, not because I maybe forgot about a carton of milk for a few weeks in the back of the fridge and conducted an unintentional science project, but just for a good time — inched your cursor to the little X of your browser tab and navigated away.

Clearly, this wasn’t the act of a sane person, though that does seem to be the theme this week. The thing is, a good amount of cheese that we eat — mozzarella, goat cheese, paneer, cottage cheese — come down to milk plus acid. What you do from there is your art. Except my first ricotta wasn’t particularly artful.

Apple pie cookies. As far as reentry* points to on-a-whim cooking go, these cookies aren’t the most obvious choice. 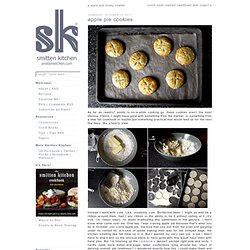 I might have gone with something from the market, or something from a new fall cookbook or maybe just something practical that would feed us for the next few days, like a hearty stew. Instead I went with cute. Like, unseemly cute. Borderline twee. Roasted tomato soup with broiled cheddar. Lest you think I spend any part of my days doing Important Things — preparing, and totally not at the last second or haphazardly, for my only child’s second birthday, or for his first week of pre-preschool; assembling warm, wholesome meals for his lunch each day; meeting my manuscript deadline; dealing with the shoe bomb that went off in my closet, etc. — it’s only fair and honest that I tell you that I’ve spent a significant portion of the last year considering ways to merge grilled cheese sandwiches and tomato soup in a single vessel. 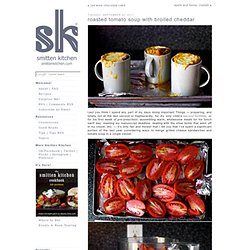 In a way, though, it relates to all of those things (well, not the shoes). There’s something very back-to-school-ish about tomato soup and grilled cheese sandwiches, and because it’s still September, if you’re lucky, you can still get some tomatoes worth eating, and if not that, at least worth cooking down. Roasted Tomato Soup with Broiled Cheddar Serves 4 (though closer to 6 if served in mugs) Make soup: Preheat oven to 400°F. Easy as fried pie. Cake or pie? 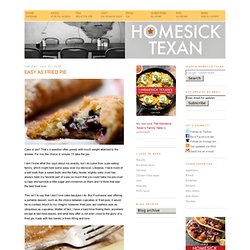 That’s a question often posed, with much weight attached to the answer. For me, the choice is simple: I’ll take the pie. I don’t know what this says about me exactly, but I do come from a pie-eating family, which might hold some sway over my decision. Likewise, I have more of a salt tooth than a sweet tooth, and the flaky, tender, slightly salty crust has always been my favorite part of a pie, so much that you could bake me pie-crust scraps and sprinkle a little sugar and cinnamon on them and I’d think that was the best treat ever.

Tex-Mex fried pies. “I have four words for you,” said a friend. 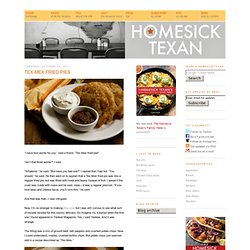 “Tex-Mex fried pie!” “Isn’t that three words?” I said. “Whatever,” he said. “But have you had one?” Entomatadas recipe. It’s that time of year when tomatoes are about to say farewell, and I’ve been eating them as often as I can. 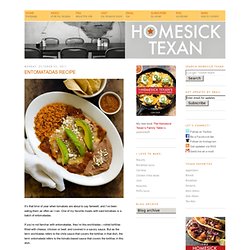 One of my favorite meals with said tomatoes is a batch of entomatadas. If you’re not familiar with entomatadas, they’re like enchiladas—rolled tortillas filled with cheese, chicken or beef, and covered in a savory sauce. But as the term enchiladas refers to the chile sauce that covers the tortillas in that dish, the term entomatada refers to the tomato-based sauce that covers the tortillas in this dish. The last time I had entomatadas in Texas was at a Mexican cafe in downtown Victoria called Mi Familia. There was a chalkboard outside that listed the specials, and in big letters was the announcement they were on offer that day. When the waitress came to my table, I asked her about the entomatadas. Pumpkin S'mores Cake, and a Blogrthday! Well! 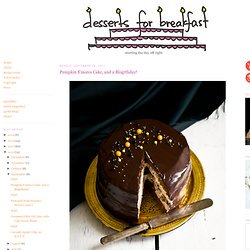 This little slice of the internets is turning two! Gimme S'more Cakelettes. As promised: gimme s'more cakelettes! Oh man, I am so excited about these little individually-sized cakes because they turned out super yummy. Like, lick-your-own-plate-and-then-reach-over-and-lick-your-neighbor's-plate yummy. They do take up quite a few steps and components, but let me tell you right now that they are well worth it. Trust me. Of course, no s'mores cake would be perfect without baking homemade graham crackers first, which are far deeper and complex in flavor than those store-bought crackers that taste uncannily like the cardboard they come packed in. Apple Cinnamon Coffee Cake. Now is not the time to be thinking about New Year’s Resolutions. Ignore the plastic Christmas trees at Costco… we still have time. We have months. The year is not over yet. We can totally take it easy. Lavender Shortbread Cookies.

Hello, today. This week was inspired by…dinner with a new friend on face plates. Pea pasta with lemon. Pumpkin Brown Butter Cupcakes with Cinnamon Frosting. I'm aware that the food world has no shortage of pumpkin cupcake recipes, but I'm sharing this one anyway. It's my favorite because it doesn't err on the "muffiny" side. It is truly a pumpkin cupcake, and I cannot recommend them enough. Make them! Need some convincing?

Sour cream. Cooked cinnamon frosting. And what about those postage stamp cupcake banners? Elsewhere just happened to be in a bag of international postage stamps. Used international postage stamps can be purchased inexpensively at bookstores. Pumpkin Brown Butter Cupcakes. Japanese Basics: How to make Japanese-style plain rice and sushi rice. Update: I've updated this post substantially in these two articles, 10 years later: How to cook great Japanese style rice, and How to make sushi rice (shari). Onigiri (Omusubi) revisited: An easier way to make Japanese rice balls, step by step. [Update:] See all kinds of onigiri on my new bento-only site, Just Bento. Basics: Cold soba noodles with dipping sauce. I’ve updated this very popular article a little bit and pushed it up from the archives, since it is the season for cold noodles now. Spring rolls (harumaki), Japanese style.

This recipe for spring rolls, or harumaki (春巻き) as they are call in Japanese, may not be authentic - or at least, not authentically Chinese. Carrot Ginger Coconut Soup and Kale Chips. Homemade Mascarpone Cheese. Seriously i'm amazed (and somewhat appalled) that storebought mascarpone is soooo expensive when its technically not even cheese. we can make it easily at home at a fraction of the price using only TWO ingredients (whipping cream and lemon juice) so ever since i started making my own there's no turning back to storebought. Korean recipes: Easy kimchi. Hi everybody, Kimchi Jjigae 김치찌개. Turkish Coffee Ice Cream with Rosewater Raspberries. Some recipe ideas always seem to take longer to come to fruition than others. Zucchini Pickles. In the past, I have publicly expressed my dislike of bread and butter pickles. Tomato Cobbler. I love tomatoes unconditionally.