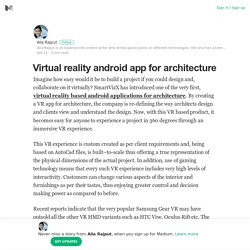 SmartVizX has introduced one of the very first, virtual reality based android applications for architecture. By creating a VR app for architecture, the company is re-defining the way architects design and clients view and understand the design. Now, with this VR based product, it becomes easy for anyone to experience a project in 360 degrees through an immersive VR experience. This VR experience is custom created as per client requirements and, being based on AutoCad files, is built–to-scale thus offering a true representation of the physical dimensions of the actual project.

In addition, use of gaming technology means that every such VR experience includes very high levels of interactivity. Recent reports indicate that the very popular Samsung Gear VR may have outsold all the other VR HMD variants such as HTC Vive, Oculus Rift etc. ViViz VR - Harnessing the power of Mobile Virtual Reality Solutions for business. SmartVizX - The Smartphone is an incredible tool. 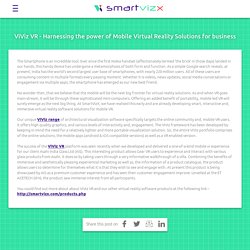 Ever since the first Nokia handset (affectionately termed ‘the brick’ in those days) landed in our hands, this handy device has undergone a metamorphosis of both form and function. As a simple Google search reveals, at present, India has the world’s second largest user base of smartphones, with nearly 220 million users. All of these users are consuming content in multiple formats every passing moment.

Whether it is videos, news updates, social media conversations or engagement via multiple apps, the smartphone has emerged as our new best friend. No wonder then, that we believe that the mobile will be the next big frontier for virtual reality solutions. Our unique ViViz range of architectural visualization software specifically targets the online community and, mobile VR users. SmartVizX - So last time I wrote something a few weeks back; it was about the rather symbiotic relationship between science fiction and actual science. 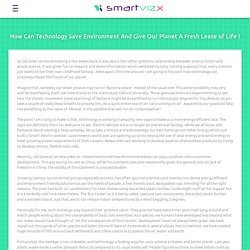 It was great fun to research and share information which validated my long running suspicion that, every scientist just wants to live their own childhood fantasy. Jokes apart, this time around, I am going to focus on how technology can positively impact the future of our planet. Imagine that, someday our smart phones may run on ‘Bacteria power’ instead of the usual one! This weird possibility may very well be manifesting itself real time thanks to the scientists at Oxford University. Those geniuses there are experimenting to see how the chaotic movement (read swarming) of bacteria might be streamlined to run microscopic engines for tiny devices. The point I am trying to make is that, technology is working in amazing new ways to make us a more energy efficient race. 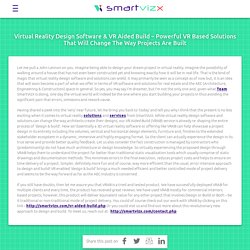 Imagine being able to design your dream project in virtual reality. Imagine the possibility of walking around a house that has not even been constructed yet and knowing exactly how it will be in real life. That is the kind of magic that virtual reality design software and solutions can wield. It may primarily be seen as a concept as of now but, it is an idea that will soon become a part of what we offer in terms of VR software and solutions for real estate and the AEC (Architecture, Engineering & Construction) space in general.

So yes, you may say I’m dreamer, but I’m not the only one and, given what Team SmartVizX is doing, one day the virtual world will indeed be the one where you start building your projects in thus avoiding the significant pain that errors, omissions and rework cause. If you still have doubts, then let me assure you that VRAB is a tried and tested product. 3d Architectural Visualizations For Real Estate. Architectural Visualization Software For Real Estate. Three Ways to Harness The Power of Virtual Reality in Architecture &amp; Design. Virtual Reality has emerged as the buzzword of 2016. 2017 should see the launch of even more powerful VR hardware and gaming engines that will support far more complex creations than what are seen now. 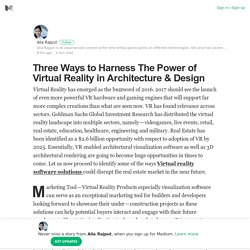