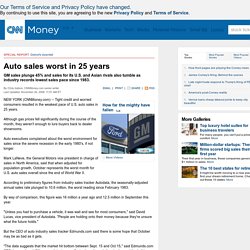 Although gas prices fell significantly during the course of the month, they weren't enough to lure buyers back to dealer showrooms. Failure of Big Three could cost 3 million jobs, CAR says - Nov. 5, 2008. NEW YORK (CNNMoney.com) -- With auto sales at the weakest pace in 25 years and a government bailout far from certain, job losses in the struggling industry could potentially get much worse. 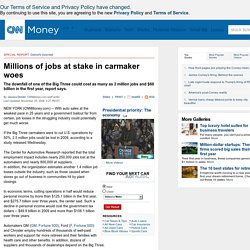 If the Big Three carmakers were to cut U.S. operations by 50%, 2.5 million jobs could be lost in 2009, according to a study released Wednesday. The Center for Automotive Research reported that the total employment impact includes nearly 250,000 jobs lost at the automakers and nearly 800,000 at suppliers. In addition, the organization estimates another 1.4 million job losses outside the industry, such as those caused when stores go out of business in communities hit by plant closings. In economic terms, cutting operations in half would reduce personal income by more than $125.1 billion in the first year, and $275.7 billion over three years, the center said.

How Detroit Went Bottom-Up. In the spring of 2005, David Stockman at last reaped the reward of the monopolist. 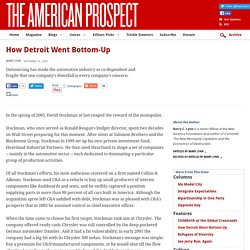 Stockman, who once served as Ronald Reagan's budget director, spent two decades on Wall Street preparing for this moment. After stints at Salomon Brothers and the Blackstone Group, Stockman in 1999 set up his own private investment fund, Heartland Industrial Partners. He then used Heartland to shape a set of companies -- mainly in the automotive sector -- each dedicated to dominating a particular group of production activities. Of all Stockman's efforts, his most audacious centered on a firm named Collins & Aikman. Stockman used C&A as a vehicle to buy up small producers of interior components like dashboards and seats, and he swiftly captured a position supplying parts to more than 90 percent of all cars built in America. When the time came to choose his first target, Stockman took aim at Chrysler. Unfortunately for Stockman, he appears to have mis-timed his play for a big payday. Advertisement PinIt. Bailout debate: How the Big 3 came apart and how to fix them - Nov. 17, 2008.

NEW YORK (CNNMoney.com) -- Why is the U.S. auto industry in such a precarious position? 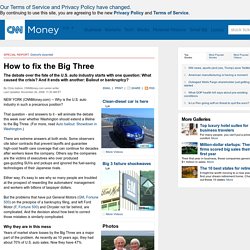 That question - and answers to it - will animate the debate this week over whether Washington should extend a lifeline to the Big Three. (For more, read Auto bailout: Showdown in Washington.) There are extreme answers at both ends. Some observers cite labor contracts that prevent layoffs and guarantee high-cost health care coverage that can continue for decades after workers leave the company. Cookies are Not Accepted - New York Times. Detroit at the White House: Trump meets with Big Three auto CEOs - Jan. 23, 2017. In opening remarks to the press, Trump claimed he was already "bringing manufacturing back to the United States big league. 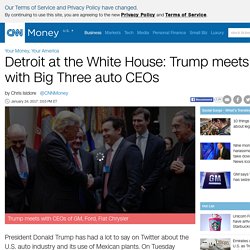 " He didn't talk about his threats to impose tariffs and border taxes on goods brought in from Mexico. Instead, he talked about incentives that would get automakers to build here, such as reduced corporate tax rates. A new Detroit: Can the Motor City come back? ONE of this week's big American news stories was the release of new Census data for the state of Michigan, which revealed that the city of Detroit underwent a stunning population decline between 2000 and 2010. 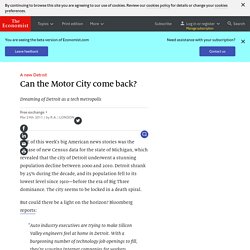 Detroit shrank by 25% during the decade, and its population fell to its lowest level since 1910—before the era of Big Three dominance. The city seems to be locked in a death spiral. But could there be a light on the horizon? Bloomberg reports: Auto industry executives are trying to make Silicon Valley engineers feel at home in Detroit. The rise and fall of Detroit: A timeline. Sign Up for Our free email newsletters On Thursday, Detroit made history — and not in a good way.

The heart of the U.S. auto industry and home to the Detroit Tigers, Eminem and the White Stripes, Motown, and (maybe) Jimmy Hoffa's body became the largest city ever to file for bankruptcy. In many ways, this financial crisis is 60 years in the making. As the Motor City faces an uncertain future, here's a look back at some key dates in the long, storied past of one of America's great cities: July 24, 1701Antoine de La Mothe Cadillac establishes a French settlement, Fort Ponchartrain du Détroit (the strait), along with 100 French soldiers and an equal number of Algonquins. 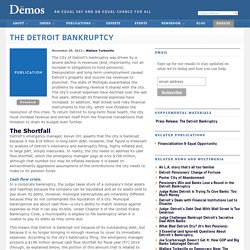