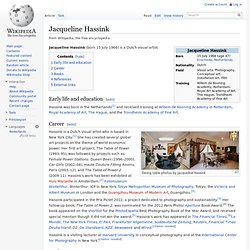 Early life and education[edit] Hassink was born in the Netherlands[1] and received training at Willem de Kooning Academy in Rotterdam, Royal Academy of Art, The Hague, and the Trondheim Academy of Fine Art. Career[edit] Dining table photos by Jacqueline Hassink Hassink is a Dutch visual artist who is based in New York City.[1] She has created several global art projects on the theme of world economic power. Hassink is a visiting lecturer at Harvard University in conceptual photography and at the International Center for Photography in New York. Books[edit] Jacqueline Hassink. Jacqueline Hassink. In 2000 I spend a month visiting quarries in the Larvik area of Norway. 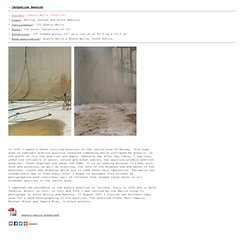 This huge area of Labrador granite quarries revealed something which intrigued me greatly. In the month of July the quarries are empty. Spending day after day there, I saw that, under the influence of water, nature and human labour, the quarries produce abstract drawings. These drawings are never the same. It is an ongoing process in time; rain, snow and sunshine, as well as blasting, the cuts of the diamond saw and marks of the machines, create new drawings which are in some cases very impressive. Beate Gütschow. Beate Gütschow (born 1970 in Mainz, Germany) is a contemporary German artist. 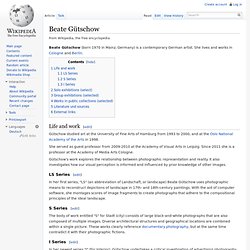 She lives and works in Cologne and Berlin. Life and work[edit] Gütschow studied art at the University of Fine Arts of Hamburg from 1993 to 2000, and at the Oslo National Academy of the Arts in 1998. She served as guest professor from 2009-2010 at the Academy of Visual Arts in Leipzig. Since 2011 she is a professor at the Academy of Media Arts Cologne. Gütschow’s work explores the relationship between photographic representation and reality. Beate Guetschow: LS. Edward Weston. Edward Henry Weston (March 24, 1886 – January 1, 1958) was a 20th-century American photographer. 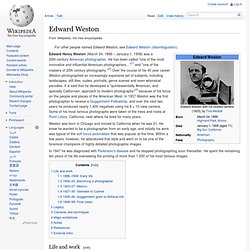 He has been called "one of the most innovative and influential American photographers…"[1] and "one of the masters of 20th century photography. "[2] Over the course of his 40 year career Weston photographed an increasingly expansive set of subjects, including landscapes, still lifes, nudes, portraits, genre scenes and even whimsical parodies. It is said that he developed a "quintessentially American, and specially Californian, approach to modern photography"[3] because of his focus on the people and places of the American West. In 1937 Weston was the first photographer to receive a Guggenheim Fellowship, and over the next two years he produced nearly 1,400 negatives using his 8 × 10 view camera. 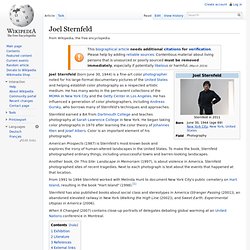 He has many works in the permanent collections of the MOMA in New York City and the Getty Center in Los Angeles. He has influenced a generation of color photographers, including Andreas Gursky, who borrows many of Sternfeld's techniques and approaches. Sternfeld earned a BA from Dartmouth College and teaches photography at Sarah Lawrence College in New York. He began taking color photographs in 1970 after learning the color theory of Johannes Itten and Josef Albers. Color is an important element of his photographs. American Prospects (1987) is Sternfeld's most known book and explores the irony of human-altered landscapes in the United States. Joel Meyerowitz : Photographer. Joel Meyerowitz Photography, LLC. Stephen Shore. Stephen Shore (born October 8, 1947) is an American photographer known for his images of banal scenes and objects in the United States, and for his pioneering use of color in art photography. 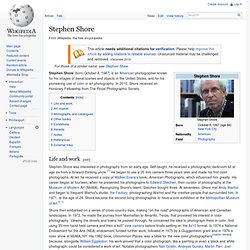 In 2010, Shore received an Honorary Fellowship from The Royal Photographic Society. Life and work[edit] Stephen Shore was interested in photography from an early age. Self-taught, he received a photographic darkroom kit at age six from a forward-thinking uncle.[1] He began to use a 35 mm camera three years later and made his first color photographs. At ten he received a copy of Walker Evans's book, American Photographs, which influenced him greatly. Shore has been the director of the photography department at Bard College since 1982. Art market[edit] Stephen Shore, Photographer - Work, Biography, CV. 303 Gallery - Stephen Shore.

Stephen Shore (American, born 1947) 8,547 Artists and 51,925 Works Online If you are interested in reproducing images from The Museum of Modern Art web site, please visit the Image Permissions page (www.moma.org/permissions). 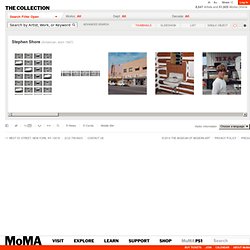 For additional information about using content from MoMA.org, please visit About this Site (www.moma.org/site). © Copyright 2011 The Museum of Modern Art. William Eggleston. Genius in colour: Why William Eggleston is the world’s greatest photographer - Features - Art. Of course not. 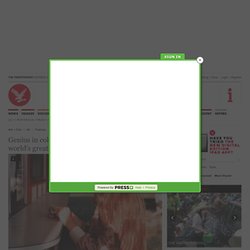