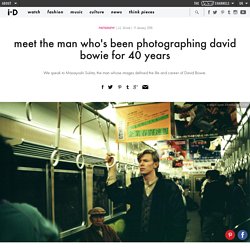 At this time our thoughts are with his family. In 1972, David Bowie became Ziggy Stardust, an alien superstar with enigmatic appeal. This was also the year that he would meet a man from Japan with a fondness for rock 'n' roll and the films of Marlon Brando, a man who would take his photograph for the next 40 years. Masayoshi Sukita, whose new show of Bowie images is up now in New York, draws inspiration from classic American films along with the photography of Irving Penn and Dennis Stock. After working in advertising, Sukita became a freelance photographer in 1970, capturing the art, film, and rock 'n' roll scenes of both London and New York. While in London to shoot T-Rex's Marc Bolan, Sukita came across an image of Bowie which incited an immediate need to shoot him. The Bewley Brothers, 1973 When did your relationship with photography start? Why did you gravitate towards rock 'n' roll? 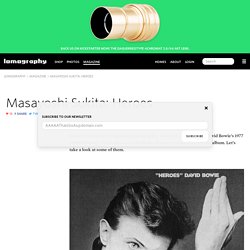 There were several photos that were considered for the album. Let’s take a look at some of them. Masayoshi Sukita first met David Bowie in 1972. Sukita’s first photos of David Bowie were taken in the Rainbow Theatre in London. Since then, they have collaborated in many projects. Probably one of the most popular collaborations between the two is for Bowie’s 1977 album entitled Heroes. Here are some outtakes from the Heroes album shoot: Sukita and Bowie have been friends for 40 years and the photographer has literally thousands of photos of Bowie – most of which are previously unseen by the public. The information for this article was taken from Rolling Stone, Wikipedia - Heroes, 5 Years and Genesis Publications.

David Bowie, Photographed Over 40+ Years by Masayoshi Sukita. The Bewlay Brothers Watch That Man III Nearly half a century ago, in 1972, Japanese photographer Masayoshi Sukita was visiting London when he encountered a poster that would change the course of the rest of his life. 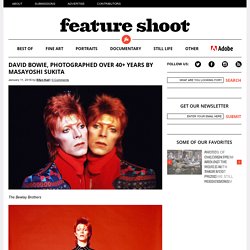 From a group of nearby fans, he learned the name of the unfamiliar musician who appeared on the poster, and unable to get his image out of his head, he arranged a portrait session with the young man, whose music was entirely unknown to him. To meet his new subject, Sukita brought a bottle of wine and embarked on what would become a forty-plus year collaboration with the mysterious man on the poster: David Bowie. From there, Sukita would go on to shoot Bowie’s 1977 Heroes album cover, a photo that would again grace the cover of The Next Day two years ago.

In fall 2015, Morrison Hotel Gallery in New York unveiled a collection of Sukita’s photographs of his longtime muse, prompting Bowie to release a statement describing his trusted colleague as nothing short of “a master.” Ki. Features. Features Indexhibit CMS enables you to create your own website. 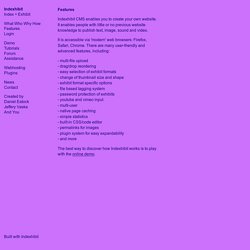 It enables people with little or no previous website knowledge to publish text, image, sound and video. It is accessible via 'modern' web browsers: Firefox, Safari, Chrome. There are many user-friendly and advanced features, including: - multi-file upload - drag/drop reordering - easy selection of exhibit formats - change of thumbnail size and shape - exhibit format specific options - file based tagging system - password protection of exhibits - youtube and vimeo input - multi-user - native page caching - simple statistics - built-in CSS/code editor - permalinks for images - plugin system for easy expandability - and more The best way to discover how Indexhibit works is to play with the online demo. Girls' world: 10 nyc student photographers capturing girlhood in 2016. In a photography world ruled by artists like Petra Collins and Olivia Bee, it often seems that the most shared and discussed images in 2016 are being taken by younger and younger female-identifying artists. 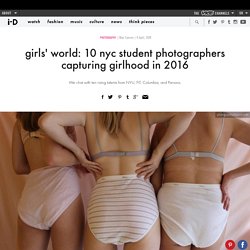 And in the age of Instagram, these emerging artists are able to share their aesthetic visions, inspire one another, and connect more than ever. Now in college, the first generation of women to be raised on social media are channeling the power they hold in representing their friends, and forging a modern image of young womanhood. Nine students and one recent grad talk photo friendships, "girly" aesthetics, and the female gaze. Bianca Valle, 20, NYU TischWho inspires you? I love Philip Lorca Dicorcia's work a lot right now.Favorite place to shoot? Olivia Arthur. Herself.