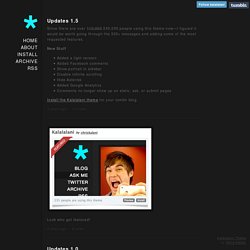 New StuffAdded a light versionAdded Facebook commentsShow portrait in sidebarDisable infinite scrollingHide AsteriskAdded Google AnalyticsComments no longer show up on static, ask, or submit pagesInstall the Kalalalani theme for your tumblr blog. Look who got featured! Updates 1.0 I added and fixed a few things. They should be live soon! Add disqus comments via customize pane, no need to touch the codeAdded Pages functionality to the side nav.

53 Best Free Tumblr Themes With Great Designs. Listed here are the best free Tumblr themes that are gracefully made by several creators to give you an enhanced blogging action. 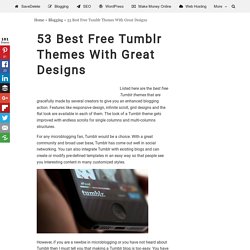 Features like responsive design, infinite scroll, grid designs and the flat look are available in each of them. The look of a Tumblr theme gets improved with endless scrolls for single columns and multi-columns structures. For any microblogging fan, Tumblr would be a choice. With a great community and broad user base, Tumblr has come out well in social networking. You can also integrate Tumblr with existing blogs and can create or modify pre-defined templates in an easy way so that people see you interesting content in many customized styles. However, if you are a newbie in microblogging or you have not heard about Tumblr then I must tell you that making a Tumblr blog is too easy. You do not have to look for a professional service to open a Tumblr blog. Below we have provided preview links that can help you install theme directly. How to Insert a Logo Into Tumblr. Inserting a logo into your Tumblr theme will enhance your site's branding and online identity.

If your Tumblr is being used as a professional portfolio site or a representation of a company, use professionally designed logos for your theme headers. Select a theme designed with the option to incorporate a customised header for prominent exposure of your brand throughout your Tumblr site. Skill level: Moderate. Snipplx — Changing Your Blog Title With a Logo Of Your Own. 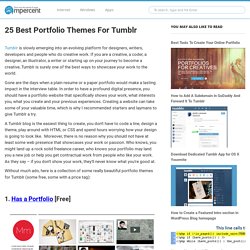 If you are a creative, a coder, a designer, an illustrator, a writer or starting up on your journey to become a creative, Tumblr is surely one of the best ways to showcase your work to the world. Gone are the days when a plain resume or a paper portfolio would make a lasting impact in the interview table. In order to have a profound digital presence, you should have a portfolio website that specifically shows your work, what interests you, what you create and your previous experiences. Creating a website can take some of your valuable time, which is why I recommended starters and laymans to give Tumblr a try. A Tumblr blog is the easiest thing to create, you don’t have to code a line, design a theme, play around with HTML or CSS and spend hours worrying how your design is going to look like. 1. 2. 3. An Example Portfolio. How To Create a Horizontally Scrolling Site. If web pages were made out of wood, the grain would be running up and down. 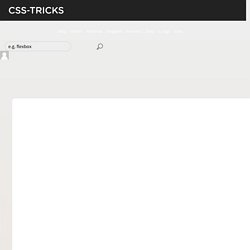 Vertical is the natural flow of web layout. When page elements reach the right edge of the browser window and go over, the flow defaults to "wrapping" that element down onto the next line. The more content on the page, the taller it gets, not the wider. Why is this? Because it just makes sense. This natural flow has lead to conventions in web page layout and even into hardware itself.

View Demo Download Files The best way to do it I'm going to go out on a limb here and say that I think a table is the best layout technique for a horizontally scrolling site. Set a really wide static width. The <table> method.