Web tools club - The biggest free tools collection for the web industry. Hotjar – Heatmaps, Visitor Recordings, Conversion Funnels, Form Analytics, Feedback Polls and Surveys in One Platform. Understanding the key variables in Viral Marketing. A short study of this web site reveals that a hugely important factor for success in startup companies is finding ways to acquire customers at a low cost. 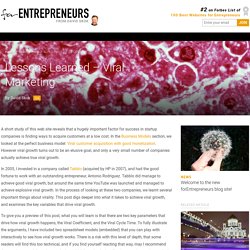 In the Business Models section, we looked at the perfect business model: Viral customer acquisition with good monetization. However viral growth turns out to be an elusive goal, and only a very small number of companies actually achieve true viral growth. In 2005, I invested in a company called Tabblo (acquired by HP in 2007), and had the good fortune to work with an outstanding entrepreneur, Antonio Rodriguez. Tabblo did manage to achieve good viral growth, but around the same time YouTube was launched and managed to achieve explosive viral growth.

In the process of looking at these two companies, we learnt several important things about virality. To give you a preview of this post, what you will learn is that there are two key parameters that drive how viral growth happens, the Viral Coefficient, and the Viral Cycle Time.

Keep Your Startup from Failing with this Guide. "It's fine to celebrate success but it is more important to heed the lessons of failure. 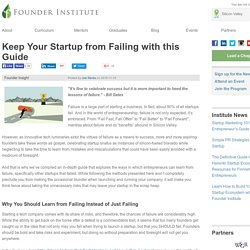 " - Bill Gates Failure is a large part of starting a business. In fact, about 90% of all startups fail. And in the world of entrepreneurship, failure is not only expected, it’s embraced. From “Fail Fast, Fail Often” to “Fail Better” to “Fail Forward”, mantras about failure and its “benefits” abound in Silicon Valley. However, as innovative tech luminaries extol the virtues of failure as a means to success, more and more aspiring founders take these words as gospel, celebrating startup snafus as instances of silicon-fueled bravado while neglecting to take the time to learn from mistakes and miscalculations that could have been easily avoided with a modicum of foresight. And that is why we’ve compiled an in-depth guide that explores the ways in which entrepreneurs can learn from failure, specifically other startups that failed. Why You Should Learn from Failing Instead of Just Failing Final Thoughts. 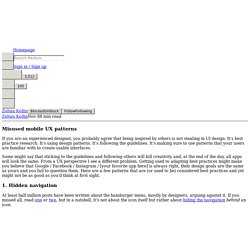 It’s best practice research. It’s using design patterns. It’s following the guidelines. It’s making sure to use patterns that your users are familiar with to create usable interfaces. Some might say that sticking to the guidelines and following others will kill creativity and, at the end of the day, all apps will look the same. 1. At least half million posts have been written about the hamburger menu, mostly by designers, arguing against it. This solution is pretty tempting and convenient for a designer: you don’t have to worry about the limited screen estate, just squeeze your whole navigation into a scrollable overlay that is hidden by default.

Experiments show, however, that exposing menu options in a more visible way increases engagement, user satisfaction and even revenue. 2. This doesn’t mean that you should not use icons at all. 3. 4. 5. Complete Mobile App Testing Tool - Ubertesters. LaunchKit. Typeform. Designmodo Market - Digital Goods Marketplace for Web Creatives. UI8.

Fonts, Graphics, Themes and More. Website Templates. Reason #1 Why Your Consumer Startup will Succeed. This post is the first in a series of ten posts about the 10 key reasons your consumer startup will succeed. 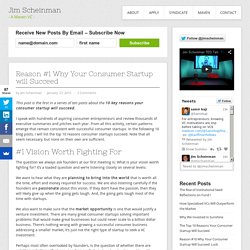 I speak with hundreds of aspiring consumer entrepreneurs and review thousands of executive summaries and pitches each year. From all this activity, certain patterns emerge that remain consistent with successful consumer startups. In the following 10 blog posts, I will list the top 10 reasons consumer startups succeed. Note that all seem necessary, but none on their own are sufficient. The question we always ask founders at our first meeting is: What is your vision worth fighting for?

We want to hear what they are planning to bring into the world that is worth all the time, effort and money required for success. We also want to make sure that the market opportunity is one that would justify a venture investment. Perhaps most often overlooked by founders, is the question of whether there are existing solutions that are good enough that already solve this problem. Let’s talk about Product Management — Greylock Perspectives. Let’s talk about Product Management I spent over a decade as a product manager at a number of different companies. 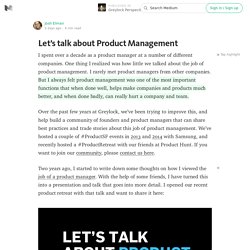