When It’s Safe to Rely on Intuition (and When It’s Not) We often use mental shortcuts (heuristics) to make decisions. 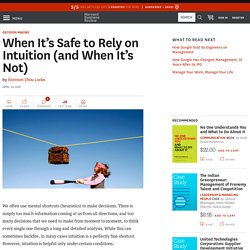 There is simply too much information coming at us from all directions, and too many decisions that we need to make from moment to moment, to think every single one through a long and detailed analysis. While this can sometimes backfire, in many cases intuition is a perfectly fine shortcut. However, intuition is helpful only under certain conditions. The most important condition is expertise. Google took away this perk. Employees freaked out - Apr. 28, 2015. The company is consistently rated the best place to work. 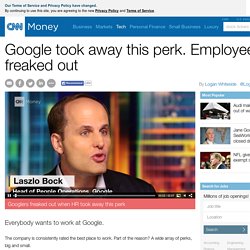 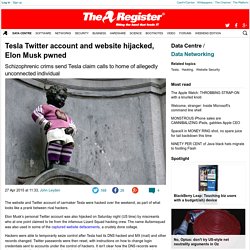 Elon Musk’s personal Twitter account was also hijacked on Saturday night (US time) by miscreants who at one point claimed to be from the infamous Lizard Squad hacking crew. The name Autismsquad was also used in some of the captured website defacements, a crudely done collage. How to Help Someone Develop Emotional Intelligence. If you are one of the unlucky people who must deal with a clueless colleague or a brutish boss, you’re not alone. 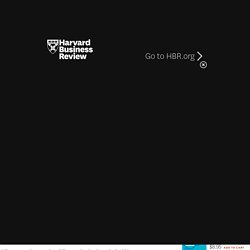 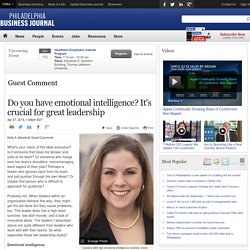 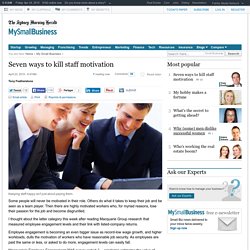 Some people will never be motivated in their role. Others do what it takes to keep their job and be seen as a team player. Then there are highly motivated workers who, for myriad reasons, lose their passion for the job and become disgruntled. I thought about the latter category this week after reading Macquarie Group research that measured employee engagement levels and their link with listed-company returns. Employee engagement is becoming an even bigger issue as record-low wage growth, and higher workloads, dulls the motivation of workers who have reasonable job security. CFO Moves: EasyJet, Panera Bread, ICAP - The CFO Report. Panera Bread to start recording employees making food. Building team spirit with fun activities. March Madness Teamwork Lessons We Can Use In Business. 10 Principles of Organization Design. A global electronics manufacturer seemed to live in a perpetual state of re-organization. 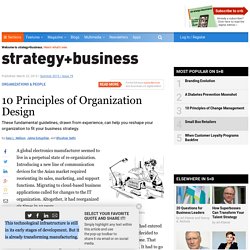 Introducing a new line of communication devices for the Asian market required reorienting its sales, marketing, and support functions. 20 things about Australian working culture that can surprise foreigners. Recently I had lunch with a group of Silicon Valley executives visiting Sydney, and noted some of the big etiquette differences between American and Australian business culture. 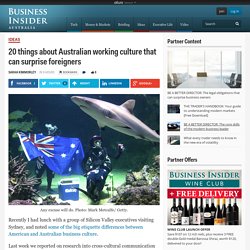 Last week we reported on research into cross-cultural communication that noted the tendency of Australian managers to swear in meetings. Fatigue: The Worst Possible Growth Strategy for Your Small Business  Let's face it. 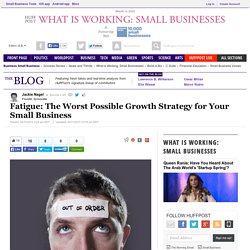 Every small business owner needs - and wants - an "edge" to grow as quickly and easily as possible. The Mission Statement Is Dead! Long Live the Mission Narrative! The idea for this piece was rattling around in the back of my brain when I came across an interesting blog post on the Association for Talent Development’s site: “Why I Hate Mission Statements—But Love Missions.” 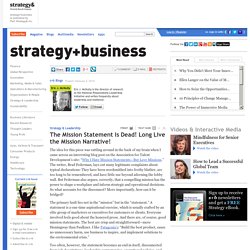 The writer, Brad Federman, lays out many legitimate complaints about typical declarations: They have been wordsmithed into frothy blather, are too long to be remembered, and have little use beyond adorning the lobby wall. But Federman also argues, correctly, that a compelling mission has the power to shape a workplace and inform strategic and operational decisions. So what accounts for the disconnect? Ronald Shaich of Panera Bread, on Discovery and Delivery. Q. How has your leadership style evolved? A. When I started out, I think I was like many people in that I was focused on the profit as the end.

I spent a lot of time around the numbers, and that phase probably lasted for five or 10 years. Elon Musk and SpaceX Plan a Space Internet - Bloomberg Business. Because he doesn't have enough going on, Elon Musk—he of Tesla Motors, SpaceX, SolarCity, and the Hyperloop—is launching another project. Musk wants to build a second Internet in space and one day use it to connect people on Mars to the Web. Musk is tonight hosting a SpaceX event in Seattle, where the company is opening a new office. The talk will mostly be about SpaceX’s plans for hiring aerospace and software engineers in the Pacific Northwest to boost the company’s rocket-building efforts. But he'll also use the talk to announce his newest idea, which would launch a vast network of communication satellites to orbit earth.

The network would do two things: speed up the general flow of data on the Internet and deliver high-speed, low-cost Internet services to the three billion-plus people who still have poor access to the Web.