How paid, owned, and earned are becoming one. Advertising and media are experiencing a moment of convergence. 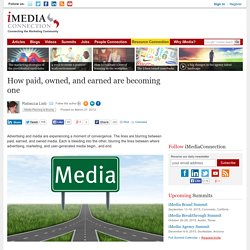 The lines are blurring between paid, earned, and owned media. Each is bleeding into the other, blurring the lines between where advertising, marketing, and user-generated media begin...and end. How Social Media is revolutionizing paid and owned media. Many marketers think the social media windfall is about getting people to talk about their brand (called “earned impressions”), having a video go viral, maintaining a Facebook fan page, and directly responding to consumers either elated or disappointed by a brand experience. 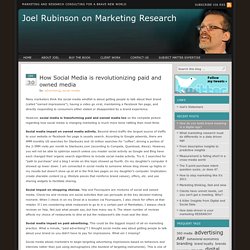 However, social media is transforming paid and owned media too so the complete picture regarding how social media is changing marketing is much more bone rattling than most think. Social media impact on owned media activity. Beyond direct traffic the largest source of traffic to your website or Facebook fan page is usually search. According to Google adwords, there are 4MM monthly US searches for Starbucks and 16 million searches for “coffee”, driving a portion of the 2-3MM visits per month to Starbucks.com (according to Compete, Quantcast, Alexa). Social impact on shopping choices. Stop.pdf. Fieldagent. Reynolds. The new advertising metrics. Dave Smith asked me to sit on his panel at ad:tech in a few weeks to talk about next-generation metrics. 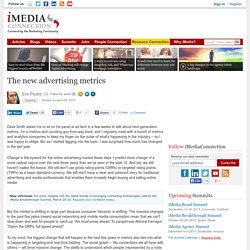 I'm a metrics and counting guy from way back, and I regularly meet with a bunch of metrics and analytics companies to keep my finger on the pulse of what's happening in the industry -- so I was happy to oblige. But as I started digging into the topic, I was surprised how much has changed in the last year. Change is the byword for the online advertising market these days. I predict more change of a more radical nature over the next three years than we've seen in the past 10. And yet, we still haven't nailed the basics. Stay informed. But the market is shifting in large part because consumer behavior is shifting. To my mind, the biggest change that will happen in the next few years in metrics also ties into what is happening in targeting and real-time bidding.

This area of marketing and technology has yet to be truly defined. Metrics and privacy hinder mobile ads. NEW YORK: A fifth (19%) of consumer-facing brands and a quarter (27%) of ad agencies worldwide say mobile advertising is a top priority for their business, yet concerns linger over measurement and privacy, a new survey has revealed. 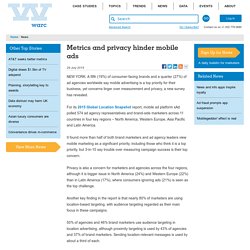 For its 2015 Global Location Snapshot report, mobile ad platform xAd polled 574 ad agency representatives and brand-side marketers across 11 countries in four key regions – North America, Western Europe, Asia Pacific and Latin America. It found more than half of both brand marketers and ad agency leaders view mobile marketing as a significant priority, including those who think it is a top priority, but 3-in-10 say trouble over measuring campaign success is their top concern. Privacy is also a concern for marketers and agencies across the four regions, although it is bigger issue in North America (24%) and Western Europe (22%) than in Latin America (17%), where consumers ignoring ads (21%) is seen as the top challenge. 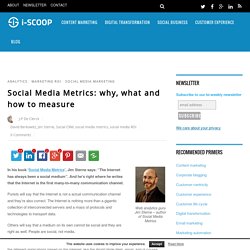 And he’s right where he writes that the Internet is the first many-to-many communication channel. Purists will say that the Internet is not a actual communication channel and they’re also correct. Welcome to Forbes. Which Stats Matter: A Definitive Guide to Social Media Metrics. Among the many superpowers I wish I had, one that would be quite useful is the ability to understand social media metrics. 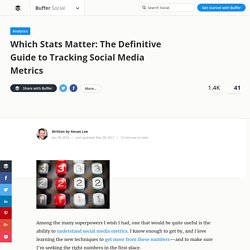 I know enough to get by, and I love learning the new techniques to get more from these numbers—and to make sure I’m seeking the right numbers in the first place. In an effort to understand the little bits I can, I’ve done some research into all the many different social media stats you might track and which ones are worthwhile. Wouldn’t you know it, social media stats aren’t just as simple as looking at the right numbers! There’s a difference between knowing what the stats mean and knowing which stats are meaningful. With that in mind, I’d love to share with you some of the stats we value greatly here at Buffer and the reasons why, as well as some new social media metrics we’re excited to try. Why it’s important to know what you’re tracking What are you hoping to get from your social media marketing? That’s question No. 1 as you consider which stats to track. P.S. 61 Social Media Metrics, Defined. Of all the hundreds of social media acronyms and abbreviations out there, I think “KPI” has confounded me the most. 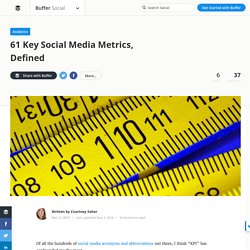 I think it’s because the phrase “key performance indicator” always sounds like something you need to be wearing a suit in front of a Powerpoint presentation in order to say. But when you get down to it, it’s really quite simple. Social Media Ad Metrics. This document specifies standard definitions for Social Media Metrics. 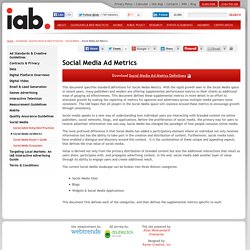 With the rapid growth seen in the Social Media space in recent years, many publishers and vendors are offering supplemental performance metrics to their clients as additional ways of gauging ad effectiveness. This document defines these supplemental metrics in more detail in an effort to stimulate growth by making the reporting of metrics for agencies and advertisers across multiple media partners more consistent. The IAB hopes that all players in the Social Media space will coalesce around these metrics to encourage growth through consistency. Social media speaks to a new way of understanding how individual users are interacting with branded content via online publishers, social networks, blogs, and applications. Before the proliferation of social media, the primary way for users to receive advertiser information was one-way.