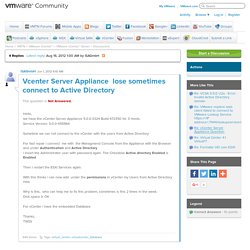 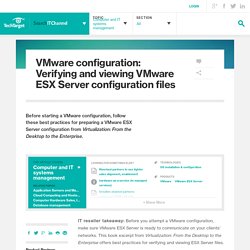 This book excerpt from Virtualization: From the Desktop to the Enterprise offers best practices for verifying and viewing ESX Server files. Configure DNS and Routing on an ESXi host - VCP5 Notes. Apart from the virtualization of the machines another important thing in the virtual infrastructure is the networking. 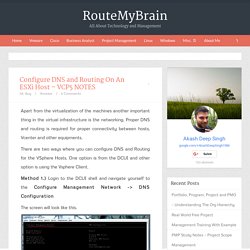 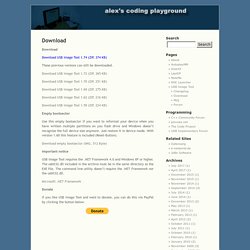 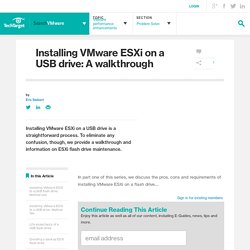 In this tip, we cover the installation process and additional information on configuring and maintaining an ESXi flash drive. Filesystem consistent Linux Backups with VMware. VMware FileSystem Sync Driver (vmsync) and linu... Mondo Tech: Install VMware Tools on RHEL 6 & Centos 6. VMware Documentation for CentOS 6. CentOS 6 documentation covers information on how to install the operating system in a virtual machine. 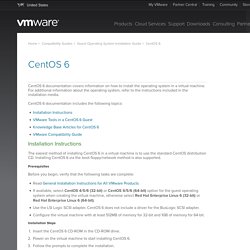 For additional information about the operating system, refer to the instructions included in the installation media. CentOS 6 documentation includes the following topics: Installation Instructions The easiest method of installing CentOS 6 in a virtual machine is to use the standard CentOS distribution CD. Installing CentOS 6 via the boot floppy/network method is also supported. Prerequisites Before you begin, verify that the following tasks are complete: Nesting Hyper-V 2012 R2 on ESXi 5.5. Since joining Nutanix I’ve had the opportunity to get exposed to Microsoft Hyper-V 2012 R2, as our platform supports the three most common hypervisors: VMware vSphere, Hyper-V, and KVM. 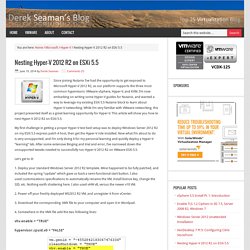 I’m now embarking on writing some Hyper-V guides for Nutanix, and wanted a way to leverage my existing ESXi 5.5 Nutanix block to learn about Hyper-V networking. While I’m very familiar with VMware networking, this project presented itself as a great learning opportunity for Hyper-V. This article will show you how to nest Hyper-V 2012 R2 on ESXi 5.5.

My first challenge in getting a proper Hyper-V test bed setup was to deploy Windows Server 2012 R2 on my ESXi 5.5 express patch 4 host, then get the Hyper-V role installed. Test driving VMware Data Recovery (vDR) - theHyperadvisor. One of the most important things next to virtualizing all those physical servers is backing them up and restoring them. 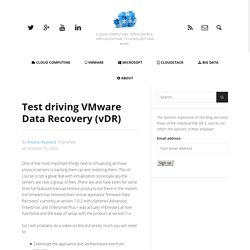 This of course is not a great feat with virtualization since basically the servers are now a group of files. There are and have been for some time full featured backup/restore products out there in the market but Vmware has released their virtual appliance “Vmware Data Recovery” currently at version 1.0.2 with vSphere4 Advanced, Enterprise, and Enterprise Plus. I was actually impressed at how functional and the ease of setup with the product at version 1.x. So, I will probably do a video on this but pretty much you will need to: Download the appliance and vdrfilerestore.exe from Vmware.Import the product into vCenter. Once this is done you will see the new feature button added to the vCenter Home area under “Solutions and Applications “. QueryChangedDiskAreas API returns incorrect sectors after extending virtual machine VMDK file with Changed Block Tracking (CBT) enabled.

vRanger workaround for VMware CBT bug 2090639 (146180) To work around this issue with any backups going forward, CBT needs to be reset. 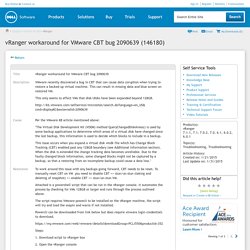 To manually reset CBT on VM you need to disable CBT >> stun/un-stun (taking and deleting of snapshot) >> enable CBT >> stun/un-stun VM. Attached is a powershell script that can be run in the vRanger console. It automates the process by checking for VMs 128GB or larger and runs through the process outlined above. The script requires VMware powecli to be installed on the vRanger machine, the script will try and load the snapin and warns if not installed. J.Soft. VMware Data Recovery error “The Umount operation failed…” - NoLabNoPartY. VMware Data Recovery appliance cannot complete the backup job due to the integrity check error blocking the backup schedule. 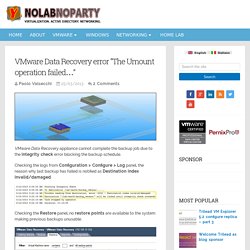 Checking the logs from Configuration > Configure > Log panel, the reason why last backup has failed is notified as Destination index invalid/damaged. Checking the Restore panel, no restore points are available to the system making previous backups unusable. Trying to Unmount the NAS share used for the backup, system answers giving an error message: The Unmount operation failed because the Destination may be in use.

Please try again later. For this problem, the fix requires that store.lck folder in the backup sharing is deleted. PVSCSI, LSI SAS or Parallel – What vSCSI adapter should I choose? Update: I’ve come across some more information which changes my recommendation (nothing is ever written in stone). While I originally suggested LSI Logic Parallel was my preferred default vSCSI adapter, armed with this newly discovered information, I now understand why LSI Logic SAS is being used as the default for the latest Microsoft OS’s. This is what my continued investigation uncovered: In the VI Client help file (I’ve never actually looked in there before) around selecting your vSCSI adapter it says this: The LSI Logic Parallel adapter and the LSI Logic SAS adapter offer equivalent performance.

There has been some excellent conversation about VR generated by presentations at VMworld and the release of SRM on the 15th of September. We've also received a lot of questions about the details of VR, and thought this would be an excellent venue and opportunity to give you some more detail on how it actually works behind the scenes to protect your VMs. What is vSphere Replication? It is an engine that provides replication of virtual machine disk files that tracks changes to VMs and ensures that blocks that differ within a specified recovery point objective are replicated to a remote site. How does VR work? Fundamentally, VR is designed to continually track I/O destined for a VMDK file and keep track of what blocks are being changed.

If VR is successful in doing so, the replica at the remote site will be able to be recovered as part of a recovery plan within SRM. Host IP in vpxa.cfg retains old value after changing service console IP. Issues after changing the IP Address of the Service Console. Using NAT between the vCenter Server system and ESXi/ESX hosts. vCenter Server displays the error: Failed to connect to host. VMWare Server: cannot connect to host.

Help needed to finish Powerchute configuration ... Hi all, I just wanted to let you know that I have found the solution. It was referenced on another website The suggested configuration contained within that blog worked in my environment and I wanted to share it here in the event that if anyone else happens to have the same issue, they can find the resolution quicker than I could come by it: Help needed to finish Powerchute configuration ... Virtual machines do not shut down gracefully.