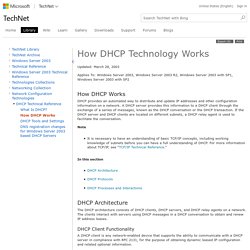 DHCP servers communicate with DHCP clients by using a series of DHCP messages. The format of DHCP messages is based on the message format used with the BOOTP protocol. RFC 2131 defines the format for each message sent between a DHCP client and a DHCP server. The following table shows the possible fields in the DHCP messages. DHCP Message Fields For a complete view of how these fields are used in each DHCP message, see RFC 2131 or use a network monitoring tool, such as Netmon, to view the DHCP messages. Windows Server 2003 includes a Multicast Address Dynamic Client Allocation Protocol (MADCAP) Server service to support dynamic assignment and configuration of IP multicast addresses on TCP/IP-based networks. 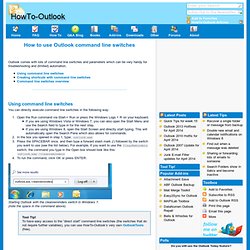 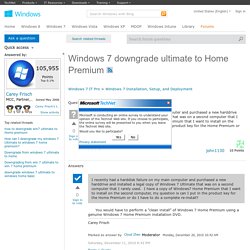 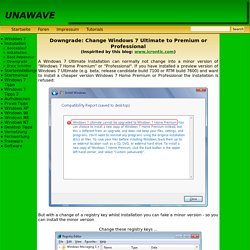 If you have installed a preview version of Windows 7 Ultimate (e.g. beta, release candidate build 7100 or RTM build 7600) and want to install a cheaper version Windows 7 Home Premium or Professional the installation is refused: But with a change of a registry key whilst installation you can fake a minor version - so you can install the minor version Change these registry keys ... Download and synchronise outlook calendar with google gmail. UPDATE OCTOBER 2014: A few months ago, Google announced they were discontinuing Google Sync and Google Calendar Sync. 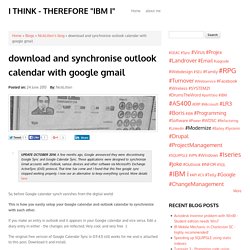 These applications were designed to synchronize Gmail accounts with Outlook, various devices and other software via Microsoft's Exchange ActiveSync (EAS) protocol. That time has come and I found that this free google sync stopped working properly. I now use an alternative to keep everything synced. More details here So, before Google calendar synch vanishes from the digital world: Sync Google Calendar in Windows Calendar App using Outlook.com App. Google and Microsoft are gradually discontinuing the inter-working support of their Apps one by one especially the Calendar Apps. 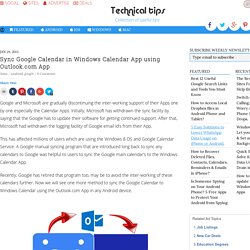 Initially, Microsoft has withdrawn the sync facility by saying that the Google has to update their software for getting continued support. After that, Microsoft had withdrawn the logging facility of Google email Id’s from their App. This has affected millions of users which are using the Windows 8 OS and Google Calendar Service. A Google manual syncing program that are introduced long back to sync any calendars to Google was helpful to users to sync the Google main calendar’s to the Windows Calendar App. 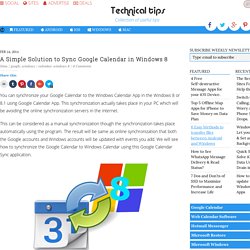 This synchronization actually takes place in your PC which will be avoiding the online synchronization servers in the internet. OneCalendar. Using Ntdsutil.exe to transfer or seize FSMO roles to a domain controller. Certain domain and enterprise-wide operations that are not good for multi-master updates are performed by a single domain controller in an Active Directory domain or forest. 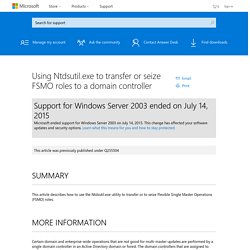 The domain controllers that are assigned to perform these unique operations are called operations masters or FSMO role holders. The following list describes the 5 unique FSMO roles in an Active Directory forest and the dependent operations that they perform: Schema master - The Schema master role is forest-wide and there is one for each forest. How to rebuild the SYSVOL tree and its content in a domain. The article describes how to use the Burflags registry entry to rebuild each domain controller's copy of the system volume (SYSVOL) tree on all domain controllers in a common Active Directory directory service domain. 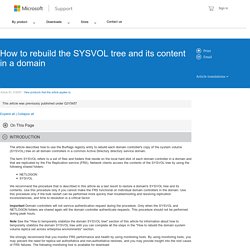 The term SYSVOL refers to a set of files and folders that reside on the local hard disk of each domain controller in a domain and that are replicated by the File Replication service (FRS). Network clients access the contents of the SYSVOL tree by using the following shared folders: NETLOGON SYSVOLWe recommend the procedure that is described in this article as a last resort to restore a domain's SYSVOL tree and its contents. Use this procedure only if you cannot make the FRS functional on individual domain controllers in the domain. Use this procedure only if the bulk restart can be performed more quickly than troubleshooting and resolving replication inconsistencies, and time to resolution is a critical factor. Guidelines. DNS Integrated Zone replication errors - Petri IT Knowledgebase Forums.

Demote/Promote DC with Tombstone Errors. Either cleanup the lingering objects or demote the DC and repromote. 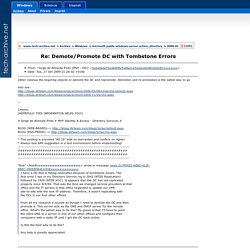 When initialized for service, DNS servers running on Windows Server 2003 apply installation settings taken either from the boot information file, the Registry, or the Active Directory database. You can modify these settings on the Advanced tab of the server properties dialog box in the DNS console, as shown in Figure 1. Figure 1. DNS server properties Advanced tab The server installation settings include six server options, which are either on or off, and three other server features with various selections for configuration.

Table 1 shows the default settings for all nine features. Ora PERFETTAMENTE Sincronizzata nel dominio - SysAdmin.it - your Skill is your Power - Forum - Sistemi Operativi - Windows Server 2008. Repair a Windows System that Won't Boot. Microsoft Windows Troubleshooting Guide Using Various Boot CDs In order to fix certain problems that prevent your system from booting you need to get your computer into a "mode" where you can run commands onto your Windows partition. Instead of physically removing the hard drive and putting it into another computer you can utilize what are called "Boot CDs" or "Rescue CDs". Below are some of the Rescue CDs that I have tried and the utilities I have used.

Microsoft Virtual Academy – Free IT Training, Online Learning of Microsoft Technologies. Windows Server Infrastructure Training Courses - Microsoft Virtual Academy. TechNet Virtual Labs. Profile and Folder Redirection In Windows Server 2003. I’ve always considered dealing with end users to be about as much fun as a trip to the dentist or a tax audit. Fortunately, there are some things that you can do to help keep the users happy (a happy user is a quiet user). The techniques that I am going to be showing you in this article center around the use of roaming profiles and folder redirection. Right now you might be wondering how something like roaming profiles can make your life easier. Well, there are several situations in which roaming profiles and folder redirections pay off big time. For example, any decent administrator will instruct their users to save their data on a network drive so that the data gets backed up each night.

Another example of how roaming profiles and folder redirections can make your life easier involves a situation in which the user gets a new PC. Another situation in which roaming profiles and folder redirections come in handy is when a user’s workstation crashes. Automatic creation of user folders for home, roaming profile and redirected folders. - Ask the Directory Services Team. Hi Rob here again. Periodically we’re asked "what is the best way to auto-create home, roaming profile, and folder redirection folders instead of Administrators creating and configuring the NTFS permissions manually? " The techniques in this post requires you to use the environment variable %USERNAME% in the user’s home folder attribute when you create the users account. We will also make use of the “$” symbol in the share name; which makes the share hidden from anyone who attempts to list the shares on the file server via computer browsing.

Alright let’s get started. Scaricare i DVD di Windows 7 già aggiornati al Service Pack 1. Digital River è una nota società partner di Microsoft alla quale il colosso di Redmond si affida per la distribuzione di molti suoi prodotti software. Dove scaricare Windows 7 SP1 MUI Language Packs. Guarda. What are the differences between Office 2010 PKC, FPP, and VL? - Welcome to the US SMB&D TS2 Team Blog. J.J. Antequino This is a question that is often asked by Partners. Often times your customers are interested only in the PRICE of acquiring Office, and are unaware of the limitations and the benefits of each of the different suites and their purchase methods.

As a follow up to Charles’ post from earlier this year, I want to offer some points to think about. Get IT Done: Keep perfect time to avoid Active Directory failure. Timing is everything, and when it comes to Active Directory, that age-old cliché is especially true. Accurate time synchronization is absolutely necessary for Active Directory to work properly. Change time domain controller.

I am in the same situation. Configuring the Windows Time Service. This article walks you through the process of setting up an authoritative time server for a Windows Server 2003-based network running Active Directory. The article outlines procedures for syncing to both an internal and external time source, and also lists additional resources for configuring the Windows Time service and troubleshooting time synchronization problems.