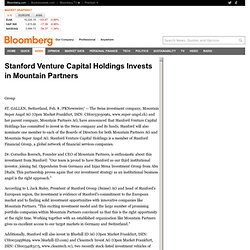 GALLEN, Switzerland, Feb. 8 /PRNewswire/ -- The Swiss investment company, Mountain Super Angel AG (Open Market Frankfurt, ISIN: CH0033050961, www.super-angel.ch) and her parent company, Mountain Partners AG, have announced that Stanford Venture Capital Holdings has committed to invest in the Swiss company and its funds. Stanford will also nominate one member to each of the Boards of Directors for both Mountain Partners AG and Mountain Super Angel AG. Stanford Venture Capital Holdings is a member of Stanford Financial Group, a global network of financial services companies. Dr. According to L Jack Staley, President of Stanford Group (Suisse) AG and head of Stanford's European region, the investment is evidence of Stanford's commitment to the European market and to finding solid investment opportunities with innovative companies like Mountain Partners. About MOUNTAIN SUPER ANGEL AG MOUNTAIN SUPER ANGEL AG is a public Swiss investment company based in St.

10 Hot Web Startups Changing the Face of Retail. Macala Wright is the publisher of FashionablyMarketing.Me, one of the leading fashion and retail industry business websites. 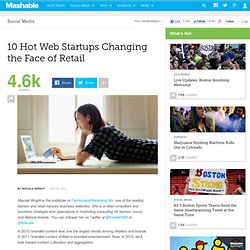 She is a retail consultant and business strategist who specializes in marketing consulting for fashion, luxury and lifestyle brands. You can follower her on Twitter at @InsideFMM or @Macala. In 2010, branded content was one the largest trends among retailers and brands. In 2011, branded content shifted to branded entertainment. Now, in 2012, we'll look toward content cultivation and aggregation. By creatively using Pinterest and Tumblr, brands are becoming enthralled with consumer curation, primarily because these types of curated sites create non-linear paths to purchases. First, retailers post visually appealing images and ideas that are accessible to the online user/consumer. “We’re demonstrating the power of peer-to-peer shopping search,” says Buyosphere’s Tara Hunt. Startup World. dPixel - Venture Capital Advisory. S. A Groupon For Sports? Crowd Seats Brings The Daily Deal Model To Sports Tickets. Daily deal sites, by and large, seem like they’re here to stay, much to Rocky Agrawal’s chagrin, surely. 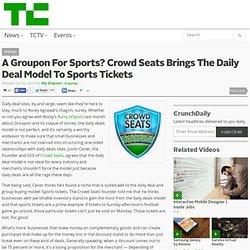 Whether or not you agree with Rocky’s flurry of posts last month about Groupon and its claque of clones, the daily deals model is not perfect, and it’s certainly a worthy endeavor to make sure that small businesses and merchants are not coerced into structuring one-sided relationships with daily deals sites.

Justin Cener, the Founder and CEO of Crowd Seats, agrees that the daily deal model is not ideal for every industry and merchants shouldn’t force the model just because daily deals are all the rage these days. That being said, Cener thinks he’s found a niche that is suited well to the daily deal and group buying model: Sports tickets. What’s more, businesses that make money on complementary goods and can create purchases that make up for the money lost in the discount stand to do more than just break even on these kind of deals.

As to how it works? 6 Startups to Watch in 2012. An Olympic games, a U.S. presidential election and the end of the world are already planned for 2012, but we're more excited about the startups. 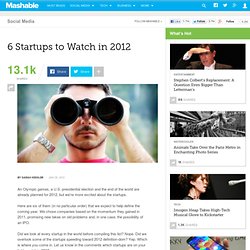 Here are six of them (in no particular order) that we expect to help define the coming year. We chose companies based on the momentum they gained in 2011, promising new takes on old problems and, in one case, the possibility of an IPO. Did we look at every startup in the world before compiling this list? Nope. Did we overlook some of the startups speeding toward 2012 definition-dom? 1. Skillshare is an online marketplace for offline classes. While the startup began with classes clustered in New York City, it now has budding communities in San Francisco, Chicago, Boston and elsewhere. Organize An Offline Class With Skillshare. The Spark of Genius Series highlights a unique feature of startups and is made possible by Microsoft BizSpark. 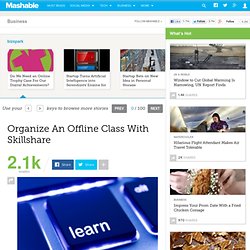 If you would like to have your startup considered for inclusion, please see the details here. Name: Skillshare Quick Pitch: Skillshare turns cities into classrooms and all of their residents into potential teachers. Genius Idea: Creating an open, online marketplace for offline classes. Skillshare co-founder Michael Karnjanaprakorn is very good at poker. When he agreed to host a poker class for them, the idea for Skillshare clicked. Skillshare, which launched in April, is a marketplace for offline classes. Typically tickets for classes on the platform cost less than $50, of which Skillshare takes a 15% cut. Less than two months after launch, the site's teachers are mostly in New York and only a handful of businesses have signed on. Image courtesy of iStockphoto, mattjeacock Series Supported by Microsoft BizSpark.