Eurail Pass Review 2014, Cheap Eurail Global Pass - Is It Worth It? At least a decade or two ago, the dream of anyone planning to travel around Europe was to buy a Eurail Saver Pass. 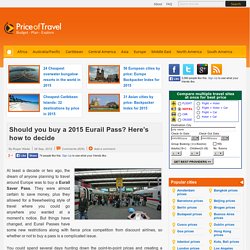 They were almost certain to save money, plus they allowed for a freewheeling style of travel where you could go anywhere you wanted at a moment’s notice. But things have changed, and Eurail Passes have some new restrictions along with fierce price competition from discount airlines, so whether or not to buy a pass is a complicated issue. You could spend several days hunting down the point-to-point prices and creating a spreadsheet to determine how much your possible routes would cost with each type of travel, but for the majority of people it’s possible to ask a few questions and the answer will be clear. Having done extensive pricing research, and having traveled around Europe both with and without Eurail Passes, we have boiled the main decision down to the key elements below. If you are age 25 or younger, a Eurail Pass is probably worth it (rest of the world) Eurail.com. The Ultimate Female All Season RTW Packing List. The following is an ultimate packing list by Ali Garland. 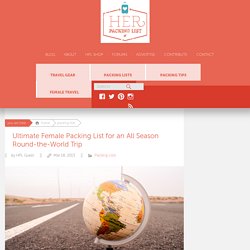 See all packing lists posts here. Or, Click Here to download your instant copy of this packing checklist. While many round the world travelers spend their time chasing summer, I chose to travel to both hot and cold climates. I spent 2 months in Southeast Asia, 2 months between Australia, New Zealand, French Polynesia, and Easter Island, and a month in the US before returning home to Germany. My trip lasted from the end of September to the end of February. I had huge variations in weather to consider when packing for this trip. Clothing 4 tank tops – Cheap ones I was willing to throw out along the way.4 T-shirts – One was for sleeping.

I knew I would do laundry based on my underwear supply, which is why I packed so many pairs. I regretted those khaki pants that zip into shorts. I am not a dress person, but if you are, I would suggest bringing 1 or 2 light dresses. Shoes 1 pair of sneakers 1 pair of flip flops 1 pair of Tevas sandals. Charlie on Travel. Charlie on Travel. eTramping.com - Travelling like tramps around the World for less than $25 a day. 5 Tips On How To Travel Central America On The Cheap. Having just concluded a five month trip through Central America, I’d like to share some money-saving tips specifically for this part of the world. 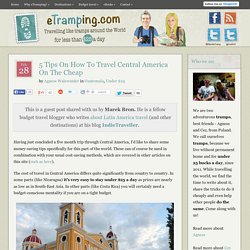 These can of course be used in combination with your usual cost-saving methods, which are covered in other articles on this site (such as here). The cost of travel in Central America differs quite significantly from country to country. In some parts (like Nicaragua) it’s very easy to stay under $25 a day as prices are nearly as low as in South-East Asia. In other parts (like Costa Rica) you will certainly need a budget-conscious mentality if you are on a tight budget. The colonial city of Leon in Nicaragua Here are a couple of tips for making your money go the furthest when travelling Central America. Costa Rica oddly appears in lots of lists of ‘cheapest travel destinations’ online, however it’s significantly more expensive than other countries in the region. 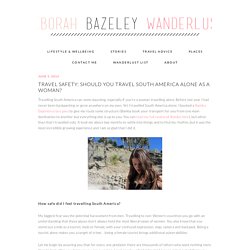 However, here is what I have taken and found to be essential. I have used every single item mentioned on this list – I hope I’ve remembered everything! My bag weighed 13kg at Heathrow Airport. Clothes 1. 1 pair of jeans. Avoid: anything white; materials that crease really easily (like nylon and satin) Miscallaenous 1. Mosquito protection 1. Obviously it depends on where you’re going in South America, but I found I didn’t need a mosquito net because all of the places I stayed at in problematic areas supplied mosquito nets anyway. Sun protection 1. Guidebooks? Either a tablet, phone, or netbook. Security 1. Notebook and pen. Spanish dictionary and/or phrasebook. Adaptor The European one works here.

Sleeping bag and tent? Sleeping bags are useful, but the only two occasions I’ve needed one were my Salt Flat tour and the Salkantay trek. Eurotrip Budget Result. The budget traveler's guide to backpacking through Europe on a shoestring. Once you have a rough idea of where you’re going to be going, you can start the first depressing part of planning a trip, budgeting. 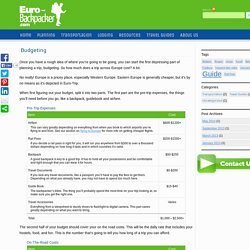 So how much does a trip across Europe cost? A lot. No really! Europe is a pricey place, especially Western Europe. Eastern Europe is generally cheaper, but it’s by no means as it’s depicted in Euro-Trip. When first figuring out your budget, split it into two parts. The second half of your budget should cover your on the road costs. Global Pass – Explore up to 24 European Countries by Train. A beginner's guide to Eurail & European rail passes. This is a one-stop independent guide to choosing, buying & using a European railpass, either a Eurail pass for overseas visitors or an InterRail pass if you live in Europe. 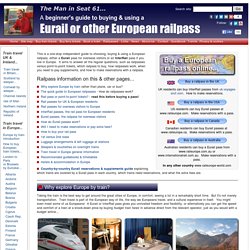 It aims to answer all the regular questions, such as railpasses versus point-to-point tickets, which railpass to buy, how railpasses work, when you need to pay supplements, and how to make reservations with a railpass. Railpass information on this & other pages... Why explore Europe by train rather than plane, car or bus? A beginner's guide to Eurail & European rail passes.