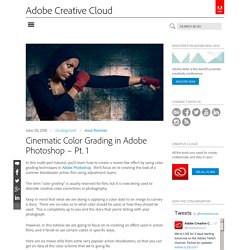 We’ll focus on re-creating the look of a summer blockbuster action film using adjustment layers. The term “color grading” is usually reserved for film, but it is now being used to describe creative color corrections in photography. Keep in mind that what we are doing is applying a color style to an image to convey a story. There are no rules as to what color should be used, or how they should be used. This is completely up to you and the story that you’re telling with your photograph. However, in this tutorial we are going to focus on re-creating an effect used in action films, and it tends to use certain colors in specific ways. Here are six movie stills from some very popular action blockbusters, so that you can get an idea of the color scheme that we’re going for.

The still from the movie, “The Matrix,” is an exception. Again, there is no right or wrong. VOTD: The Relationship Between Color and Emotions on Film. We’ve previously pointed out that movie posters have a tendency to use the colors blue and orange, because of how they work together as complimentary colors. 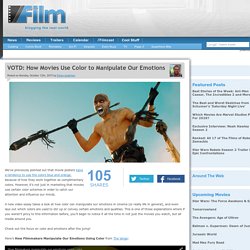 However, it’s not just in marketing that movies use certain color schemes in order to catch our attention and influence our minds. A new video essay takes a look at how color can manipulate our emotions in cinema (or really life in general), and even lays out which colors are used to stir up or convey certain emotions and qualities. This is one of those explanations where if you weren’t privy to this information before, you’ll begin to notice it all the time in not just the movies you watch, but all media around you.

Check out the focus on color and emotions after the jump! Here’s How Filmmakers Manipulate Our Emotions Using Color from The Verge: Color Grading Central. Breathing new life into old Mac Pros. As we saw in our first round of benchmarks, the new Mac Pro is more of a specialized workstation than a general purpose computer. 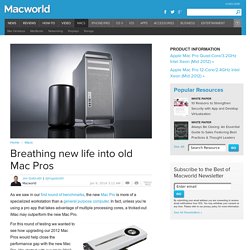 In fact, unless you’re using a pro app that takes advantage of multiple processing cores, a tricked-out iMac may outperform the new Mac Pro. For this round of testing we wanted to see how upgrading our 2012 Mac Pros would help close the performance gap with the new Mac Pro. We started with our stock 2012 quad-core and dual six-core (12 cores total) Mac Pros and upgraded them with fast flash storage via OWC’s Mercury Accelsior E2 PCIe SSD ($630), 32GB of RAM from Crucial, and faster Sapphire HD 7950 Mac Edition ($500) graphics.

Speedmark 9 scores Results are scores. The stock 2012 quad-core 3.2GHz Mac Pro with a 1TB hard drive, 6GB of RAM, and Radeon HD5770 graphics earned a Speedmark 9 score of 171. We also ran a new Photoshop action script made up of tasks that take advantage of hardware acceleration. Individual application test results. Should you upgrade your old Mac Pro ? « DAV's TechTable. One common question I get at least once a week, from my Mac Pro customers is whether or not to upgrade their current Mac Pro or just bite the bullet and buy a New Mac Pro or a High-end iMac to run the latest versions of our Adobe Creative Cloud video/audio/imaging apps. 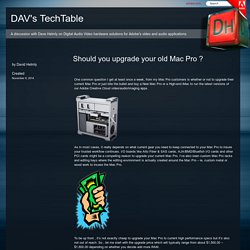 As in most cases, it really depends on what current gear you need to keep connected to your Mac Pro to insure your trusted workflow continues. I/O boards like Atto Fiber & SAS cards, AJA/BMD/Bluefish I/O cards and other PCI cards might be a compelling reason to upgrade your current Mac Pro. Wringing the Life Out of an Old Mac Pro Tower by Scott Simmons. There’s a whole lot of us who still have a big, old aluminum Mac Pro tower sitting around doing a lot of work. 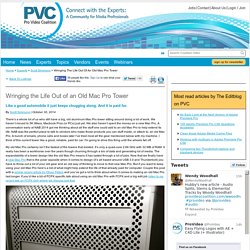 We haven’t moved to 5K iMacs, Macbook Pros (or PCs) just yet. We also haven’t spent the money on a new Mac Pro. A conversation early at NAB 2014 got me thinking about all the stuff one could add to an old Mac Pro to help extend its life. NAB was the perfect place to talk to vendors who make those products you can stuff inside, or attach to, an old Mac Pro. A bunch of emails, phone calls and boxes later I’ve tried most all the gear mentioned below with my machine. My old Mac Pro certainly isn’t the fastest of the towers that existed. We'll never forget the cheese grater design. DaVinci Resolve 11 et Mac Pro (2013): problèmes et solutions ! Apple MAC PRO Westmere MID 2010 6 Core 3 33GHz 32GO SSD HDD. J h min s jour heure heures Livraison gratuite Voir la description de l'objet + Consultez la description de l'objet pour connaître les frais de livraison. 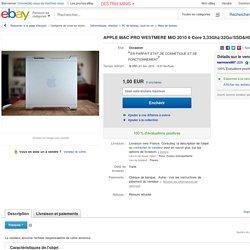 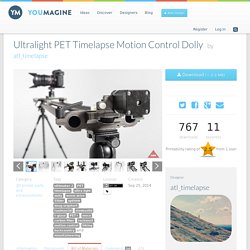 In my case, I gutted my TB3 and made an enclosure for the electronics. You might be better off using the TB3 in it's stock configuration to turn this into a 3-axis system. The TB3 is by far the best motion control solution for affordable time-lapse. The firmware and user interface is intuitive and incredibly powerful. It offers power saving features that are optimized for use with my custom worm drive. Easy belt tensioning with a sliding belt block. The mini-legs inspired by Dynamic Perception for low shooting angles. - Set.a.light 3D - BASE & Studio Edition. The virtual photo studio The virtual photo studio allows you to freely edit the dimensions and wall colours of a room and modify or save them at any time. 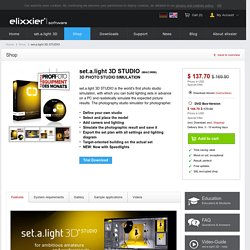 You can construct your lighting set in it. All of the elements arranged in it can be repositioned like in a real studio. The height and angle of the lighting technology can be simply adjusted. You can move freely in your 3D studio area by means of a simple control. Studio library In set.a.light 3D STUDIO you will find a miscellany of studio technology and various light shapers available on the market. NEW! On the picture wall you can display your own pictures in the studio. Le tournage de Totem du Loup, prochain film 3D de Jean-Jacques Annaud…