Dungeons & Dragons Dice Roller. World-building 104: The Lay of The Land. Welcome to the latest post in my world-building series.Last time I posted about the Fundamentals of a world, this time I’m going to talk about the thing that most people seem to think is the most important part of world-building… The map that pretty much started it all. 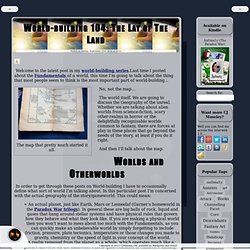 No, not the map… The world itself. We are going to discuss the Geography of the unreal. Whether we are talking about alien worlds from science-fiction, scary other-realms in horror or the delightfully recognisable worlds common to fantasy, there are forces at play in these places that go beyond the needs of the story, at least if you do it right. And then I’ll talk about the map. Worlds and Otherworlds In order to get through these posts on World-building I have to occasionally define what sort of world I’m talking about. An actual planet, just like Earth, Mars or Lesneelaf (Garner’s homeworld in the Paradox War trilogy). Climates, Regions and Biomes Check out how the temperature varies across earth Oceans and Continents. [World Building] Getting Your Climatology Right.

Worldbuilding By Map. This article was originally written for people building their own worlds for novel writing, but the process is useful for anyone who wants to create a world and draw a map. 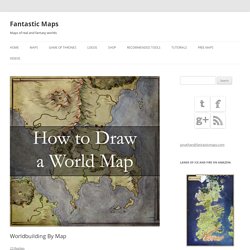 Let’s get one thing out of the way right now. A map shouldn’t be pretty. I know what you’re thinking – those posters of Middle Earth are gorgeous. Of course a map should be beautiful. But for worldbuilding purposes a pretty map is a Very Bad Thing. So we won’t be needing photoshop today, we need a pad of scratch paper and a pencil. First of all, think about the ‘world’ you need to build. In your tale there will be nations, city states or power centers of some form. Focus on major terrain at this point – how much coastline and mountain ranges. 1. It’s now time to start our map. 2. 5 Minute Workday » Building a Fantasy World III. Building a Fantasy Campaign World III: Geography Eventually, when designing a new fantasy campaign world, you’ll want to map things out. 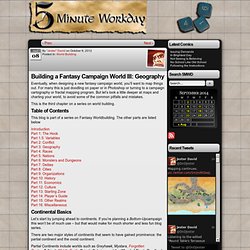 For many this is just doodling on paper or in Photoshop or turning to a campaign cartography or fractal mapping program. But let’s look a little deeper at maps and charting your world, to avoid some of the common pitfalls and mistakes. This is the third chapter on a series on world building. Table of Contents. World-Building in Fiction: A Guide. World building is not an exact science. 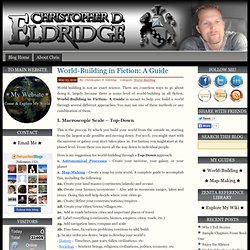 There are countless ways to go about doing it, largely because there is some level of world-building in all fiction. World-Building in Fiction: A Guide is meant to help you build a world through several different approaches. You may use one of these methods or any combination of them. I. Macroscopic Scale – Top-Down This is the process by which you build your world from the outside in, starting from the largest scale possible and moving down.

The Climate Cookbook. Geoff's homepage -> Creating planets -> Climates Last updated: 27 February 2006 With grateful thanks to krinnen, aka Gonzalo, who drew the pictures. 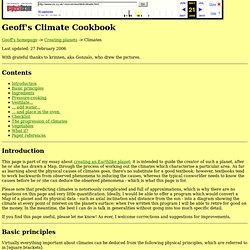 Contents Introduction This page is part of my essay about creating an Earthlike planet; it is intended to guide the creator of such a planet, after he or she has drawn a Map, through the process of working out the climates which characterise a particular area. Please note that predicting climates is notoriously complicated and full of approximations, which is why there are no equations on this page and very little quantification. If you find this page useful, please let me know! Basic principles Virtually everything important about climates can be deduced from the following physical principles, which are referred to in [square brackets]: All heating comes from the sun. Ingredients You will need the following items before you can proceed any further. 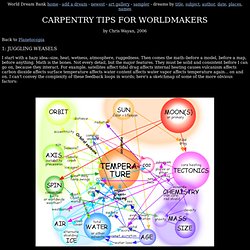 Then comes the math--before a model, before a map, before anything. Math is the bones. Like the title said: juggling weasels. The checklist to determine whether a world encourages complex civilization is, paradoxically, much shorter: A tolerable temperature range (debatable just what that is) Some solid ground (some giant worlds may be global oceans) Enough air to allow surface liquids and carry significant rain (is 0.1 atmosphere enough? But not a sophisticated one, exactly. Blog - The Worldbuilding School. 22 Great Map Resources and Tutorials - The Worldbuilding School.