Casting Shadows 1.1 (Sunday) Chapter 611 - The Legend of Randidly Ghosthound. Mother of Learning Chapter 33: Gateways, a fantasy fiction. Chapter 033 Gateways Standing still in the empty living room inside Vazen's house, Zorian stared unhappily at the splatter of green gunk in front of him that was currently eating through the floor with an audible sizzle. 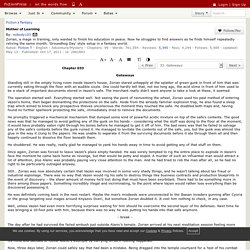 One could hardly tell that, not too long ago, the acid slime in front of him used to be a stack of important documents stored in Vazen's safe. The merchant really didn't want anyone to take a look at these, it seemed. The operation started well. He promptly triggered a mechanical mechanism that dumped some kind of powerful acidic mixture on top of the safe's contents. He shuddered. Once again, Zorian was forced to leave Vazen's place empty-handed. Still… Zorian was now absolutely certain that Vazen was involved in some very shady things, and he wasn't talking about tax fraud or industrial espionage. Duress 12.1. Last Chapter Next Chapter Alexis, Tiff, and Ty weren’t doing so hot, to put it lightly. 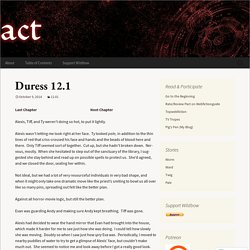 14.a.1 Out of Time. Previous | Next Some time ago The wall crinkled, like a sheet of paper being crushed into a ball in one’s hand, only here, the crinkling led to expansion, with flat petals of plaster, sharper than razors, jutting out in unpredictable patterns. 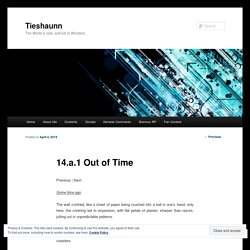 Jared dove at the last second, his arms around the warm body that’d been clinging to him since she’d appeared above the city, and barely avoided getting sliced into coasters. Kizzy cried out, but it was weak, her voice hoarse from crying and screaming into his chest, and he didn’t have time to pay attention to it anyway. The house was crinkling and distorting around them, rapidly turning from the safe haven they’d been holed up in into a death trap – seconds counted, and Jarod made them count. His feet hit the soft ground of the empty flower beds outside – his mother had been heartbroken, when she’d lost her prized tulips to an untimely storm – and he ran, looking around wide-eyed. But not the ground itself, nor any of the trees he could see. Hardwick Industries: Part 4. Internal policy? 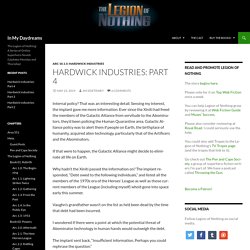 That was an interesting detail. Sensing my interest, the implant gave me more information. Ever since the Xiniti had freed the members of the Galactic Alliance from servitude to the Abominators, they’d been policing the Human Quarantine area. Galactic Alliance policy was to alert them if people on Earth, the birthplace of humanity, acquired alien technology, particularly that of the Artificers and the Abominators.

If that were to happen, the Galactic Alliance might decide to eliminate all life on Earth. Tatto Book 1.6 « Tattoo: The Books of Glory. Chapter 3.4: Knock Knock. The Wandering Inn. Heretical Edge and Summus Proelium. Previous Chapter Next Chapter About ten minutes later, I had just finished getting through the background of what happened up until I’d left the school a few days earlier, along with what I’d eventually found out from Seller, including our relationship. 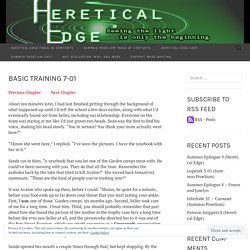 Everyone on the team was staring at me like I’d just grown two heads. Sean was the first to find his voice, shaking his head slowly. “You’re serious? You think your mom actually went here?” “I know she went here,” I replied. Sands cut in then. It was Avalon who spoke up then, before I could. Sands opened her mouth a couple times through that, but kept stopping. Before she could push on with that denial anyway, I interrupted. Columbus was the first to ask, “What do you mean? In spite of myself, I gave a short, hard laugh that probably sounded more bitter than amused. “More dangerous than some kind of secret conspiracy to hide the fact that your mom used to go here from you and from everyone else?” 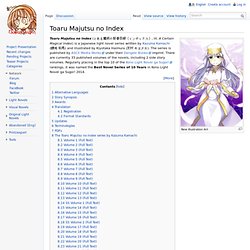 A Certain Magical Index) is a Japanese light novel series written by Kazuma Kamachi (鎌池 和馬) and illustrated by Kiyotaka Haimura (灰村 キヨタカ). The series is published by ASCII Media Works under their Dengeki Bunko imprint. There are currently 33 published volumes of the novels, including 2 side story volumes. Regularly placing in the top 10 of the Kono Light Novel ga Sugoi! John Wright - Fugitives of Chaos. Jim Butcher. Chapter One – Terrestrial Magic. Description/Blurb The last time I’d seen my parents in person was the day I left the country for graduate school. 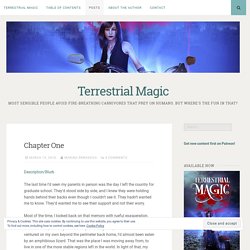 They’d stood side by side, and I knew they were holding hands behind their backs even though I couldn’t see it. They hadn’t wanted me to know. They’d wanted me to see their support and not their worry. Most of the time, I looked back on that memory with rueful exasperation.