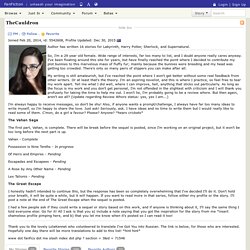 So, I'm a 29 year old female. Wide range of interests, far too many to list, and I doubt anyone really cares anyway. I've been floating around this site for years, but have finally reached the point where I decided to contribute my plot bunnies to this marvelous mass of fluffy fur; mainly because the bunnies were breeding and my head was getting too crowded. There's only so many pairs of slippers you can make after all. My writing is still amateurish, but I've reached the point where I won't get better without some real feedback from other writers. I'm always happy to receive messages, so don't be shy! The Vahan Saga. Book One: Death Chapter 28: Book 2 Teaser, a harry potter fanfic. A/N: This is a bit of a teaser for Book Two: Pestilence. 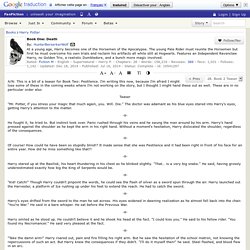 I'm writing this now, because I'm afraid I might lose some of these in the coming weeks where I'm not working on the story, but I thought I might hand these out as well. These are in no particular order also Teaser "Mr. Potter, if you stress your magic that much again, you. He fought it, he tried to. Of course! Harry stared up at the Basilisk, his heart thundering in his chest as he blinked slightly.

"Kid! Harry's eyes drifted from the sword to the man he sat across. Harry smiled as he stood up. "Take the damn arm! " Knowledge is Useful, But Power is Power Chapter 1: Prologue, a harry potter fanfic. Knowledge is Useful, but Power is Power A/N: This story had such a good reception when I posted it in Common Sense (my odd ideas file) that I decided to continue it as its own story. 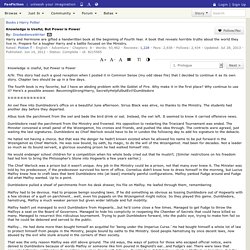 Chapter two should be up in a few days. The fourth book is my favorite, but I have an abiding problem with the Goblet of Fire. Why make it in the first place? Why continue to use it? An owl flew into Dumbledore's office on a beautiful June afternoon. Albus took the parchment from the owl and bade the bird drink or eat. Dumbledore read the parchment from the Ministry and frowned. Harry Potter, the Geek Chapter 23: Life Goes On, a harry potter fanfic. "Thank you for seeing me, sir," said Hermione politely, keeping her eyes on the venerable Headmaster of Hogwarts. 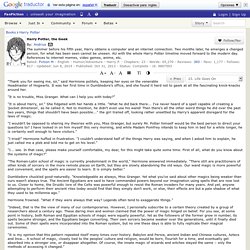 It was her first time in Dumbledore's office, and she found it hard not to gawk at all the fascinating knick-knacks around her. Harry Potter and the Third Key: Reloaded Chapter 1, a harry potter fanfic. Disclaimer: JK Rowling and assorted publishers own Harry Potter. 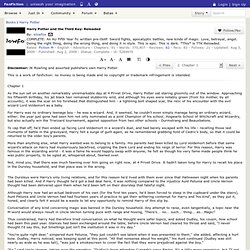 This is a work of fanfiction: no money is being made and no copyright or trademark infringement is intended. Chapter 1 As the sun set on another remarkably unremarkable day at 4 Privet Drive, Harry Potter sat staring gloomily out of the window. Approaching his fifteenth birthday, his jet black hair remained stubbornly wild, and although his eyes were notably green (from his mother, by all accounts), it was the scar on his forehead that distinguished him - a lightning bolt shaped scar, the relic of his encounter with the evil wizard Lord Voldemort as a baby. Summer of Enchantment Chapter 25, a harry potter fanfic.

Summer of Enchantment by Warviben Summary: Harry is not dealing well with Sirius' death. 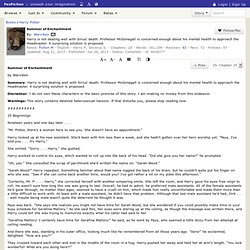 Professor McGonagall is concerned enough about his mental health to approach the Headmaster. A surprising solution is proposed. Disclaimer: I do not own these characters or the basic premise of this story. Warnings: This story contains detailed heterosexual liaisons. 25 Beginnings. Mastermind Hunting Chapter 1: Adoption, and a Prophecy, a harry potter fanfic. MASTERMIND HUNTINGwas: The Hunt (for a Missing Child)by Louis IX Summary: Dumbledore and his associates never checked on Harry during his childhood. 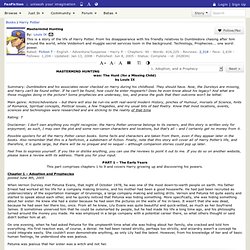 They should have. Now, the Dursleys are missing, and Harry can't be found either. If he can't be found, how could he enter Hogwarts? Does he even know about his legacy? Elemental Genesis Chapter 1: Falling into the Abyss, a harry potter fanfic. Disclaimer: Nothing you recognize is mine, it belongs to J.K Rowling and Harry's new name is from the Dragonlance series. 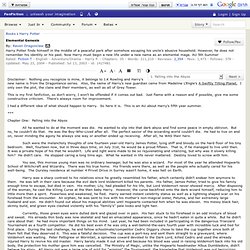 Also, the name of Harry's new guardian came from Madeline L'Engle's A Swiftly Tilting Planet. I only own the plot, the clans and their members, as well as all of Grey Tower. This is my first fanfiction, so don't worry, I won't be offended if it comes out bad. Just flame with a reason and if possible, give me some constructive criticism. There's always room for improvement. Fantastic Elves and Where to Find Them Chapter 1: Wherein Harry is Abandoned, a harry potter fanfic. A/N: Alright, new story! 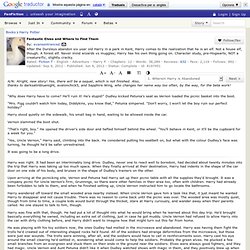 Yes, there will be a sequel, which is not finished. Also, thanks to darksatinbluenight, avalonchick5, and Sapphire Wing, who changes her name way too often, by the way, for the beta work! "Why does Harry have to come? He'll ruin it! He's stupid! " "Mrs. Harry stood quietly on the sidewalk, his small bag in hand, waiting to be allowed inside the car. Vernon slammed the boot shut. Elemental Genesis Chapter 1: Falling into the Abyss, a harry potter fanfic. Mastermind Hunting Chapter 1: Adoption, and a Prophecy, a harry potter fanfic. Strengthening Wounds Chapter 1: Prologue: Confronting the Enemy, a harry potter fanfic. Summary: (AU branching off CoS) Hurt beyond recognition, our hero tries to start anew, but some ties can't be severed, and some powers can't be acquired without a price. 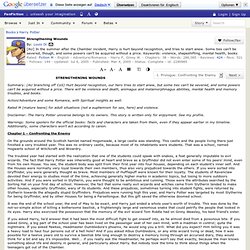 There will be violence and death, animagus and metamorphmagus abilities, mental health and memory troubles, and books. Action/Adventure and some Romance, with Spiritual insights as well. Rated M (mature teens) for adult situations (not a euphemism for sex, here) and violence. Disclaimer: The Harry Potter universe belongs to its owners.

This story is written only for enjoyment. Warnings: Some spoilers for the official books: facts and characters are taken from them, even if they appear earlier in my timeline. Chapter 1 – Confronting the Enemy On the grounds around the Scottish hamlet named Hogsmeade, a large castle was standing. The troubled year had started with the realization that one of the students could speak with snakes, a feat generally imputable to evil wizards. And they were there. "Mr Malfoy! "Reducto! "Hey! " The Blood Tipped Feather Chapter 1: Prologue. Prologue -Mrs Vo and Mr Jingles Disclaimer: I don't own Harry Potter, JK Rowling does.

As Proof of this, notice the sixth book does not have Luna searching for Crumple Horned Snorkaks... in Harry's pants! Re-Edited: Jan 30 2011 Oh how Mrs. Growing Up Kneazle Chapter 20: Returns and Valentines, a harry potter fanfic. Ch. 20 Returns and Valentines Harry pranced in the new fallen snow. Today was perfect, even for the end of winter holidays. Ginny had smuggled a letter to Harry on Errol that said she would be returning that afternoon on the train, all the Kneazle kittens had weathered the blizzard despite the lack of available food, and the Unicorn herd had told him they would be returning to the forest on a permanent basis again.

Harry had even enjoyed a nice cup of tea with Hagrid that morning; a nearly daily ritual now that winter holidays were upon them. Gazing at the sky, Harry noticed, the sun was sinking dangerously low on the horizon. The opening of the portrait swung open and the returning students filtered in.