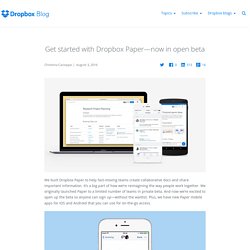 It’s a big part of how we’re reimagining the way people work together. We originally launched Paper to a limited number of teams in private beta. And now we’re excited to open up the beta so anyone can sign up—without the waitlist. Plus, we have new Paper mobile apps for iOS and Android that you can use for on-the-go access. Early Paper users have already created over a million docs and given us a ton of useful feedback. Here are some of the ways users are keeping their teams in sync with Paper: Brainstorming ideas. We can’t wait for you to get started—join the beta today at dropbox.com/paper. Update: The Paper mobile app for Android is now available to users worldwide. Put together polished docs in no time with Paper.

It’s not just what you say, it’s how you say it. 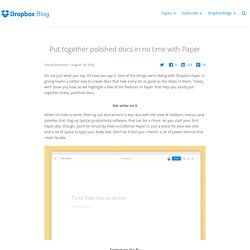 One of the things we’re doing with Dropbox Paper is giving teams a better way to create docs that look every bit as good as the ideas in them. Today, we’ll show you how, as we highlight a few of the features in Paper that help you easily put together sharp, polished docs. Get write on it When it’s time to write, filtering out distractions is key. But with the slew of toolbars, menus, and palettes that clog up typical productivity software, that can be a chore. Format on the fly We want your words to look their best. Make images shine A picture’s worth a thousand words, so adding images in Paper is dead simple. Copy, paste, embed Written communication today is so much more than words. Create tables in a snap Sometimes, a clean, organized table is the way to get your point across—think task lists or work-back schedules. That’s just the beginning. Productivity Tools - Dropbox. Easily collect photos, docs, and more with file requests. Update (September 16, 2015): Introducing file request deadlines Ever wanted to collect lots of files — or maybe just a few really big ones — within a set time period? 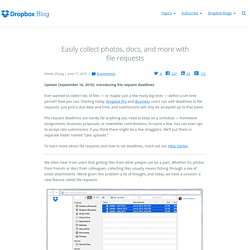 Now you can. Starting today, Dropbox Pro and Business users can add deadlines to file requests. Just pick a due date and time, and submissions will only be accepted up to that point. File request deadlines are handy for anything you need to keep on a schedule — homework assignments, business proposals, or newsletter contributions, to name a few. To learn more about file requests and how to set deadlines, check out our Help Center. We often hear from users that getting files from other people can be a pain. Get started as a team on Dropbox: Introducing the team feature. Update (September 22, 2015): The team feature is now available! 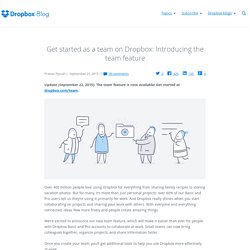 Get started at dropbox.com/team. Over 400 million people love using Dropbox for everything from sharing family recipes to storing vacation photos. But for many, it’s more than just personal projects: over 60% of our Basic and Pro users tell us they’re using it primarily for work. Now you can edit PDFs stored in Dropbox from your iPhone and iPad. Last month, we unveiled a new partnership with Adobe to make working with PDFs in Dropbox simpler and faster. 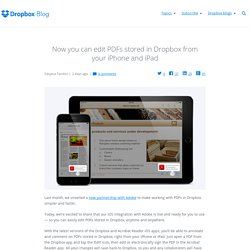 Today, we’re excited to share that our iOS integration with Adobe is live and ready for you to use — so you can easily edit PDFs stored in Dropbox, anytime and anywhere. With the latest versions of the Dropbox and Acrobat Reader iOS apps, you’ll be able to annotate and comment on PDFs stored in Dropbox, right from your iPhone or iPad. Just open a PDF from the Dropbox app and tap the ‘Edit’ icon, then edit or electronically sign the PDF in the Acrobat Reader app. All your changes will save back to Dropbox, so you and any collaborators will have the latest version. And thanks to the desktop integration we launched last month, editing PDFs stored in Dropbox is just as easy when you’re at your computer. To try out the Adobe integration on your iPhone or iPad, download the latest versions of the Dropbox iOS app and the Acrobat Reader iOS app. See who’s working on the same file with the Dropbox badge. Previously available just for Dropbox for Business users, the badge is available today for everyone on Dropbox — so you can work more efficiently with anyone, right from your Microsoft Office file. 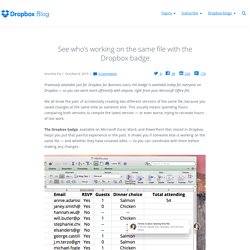 We all know the pain of accidentally creating two different versions of the same file, because you saved changes at the same time as someone else. This usually means spending hours comparing both versions to compile the latest version — or even worse, trying to recreate hours of lost work. The Dropbox badge, available on Microsoft Excel, Word, and PowerPoint files stored in Dropbox, helps you put that painful experience in the past. It shows you if someone else is working on the same file — and whether they have unsaved edits — so you can coordinate with them before making any changes. The badge also offers some time-saving shortcuts. Share link: View file history: