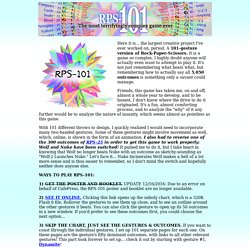 A 101-gesture version of Rock-Paper-Scissors. It is a game so complex, I highly doubt anyone will actually even want to attempt to play it. It's not just remembering what beats what, but remembering how to actually say all 5,050 outcomes is something only a savant could manage. Friends, this game has taken me, on and off, almost a whole year to develop, and to be honest, I don't know where the drive to do it originated. It's a fun, almost comforting process, and to analyze the "why" of it any further would be to analyze the nature of insanity, which seems almost as pointless as this game.

With 101 different throws to design, I quickly realized I would need to incorporate many two-handed gestures. 1) GET THE POSTER AND BOOKLET. 2) SEE IT ONLINE. 3) SKIP THE CHART, JUST SEE THE GESTURES & OUTCOMES. 4) PRINT OUT THE OUTCOMES. Social cycling and conditional responses in the Rock-Paper-Scissors game : Scientific Reports. Experimental system We recruited a total number of 360 students from different disciplines of Zhejiang University to form 60 disjoint populations of size N = 6. 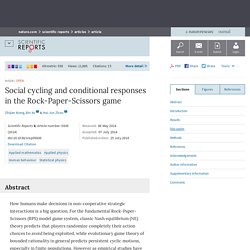 Each population then carries out one experimental session by playing the RPS game 300 rounds (taking 90–150 minutes) with a fixed value of a. In real-world situations individuals often have to make decisions based only on partial input information. Social cycling and conditional responses in the Rock-Paper-Scissors game. IB Maths Resources from British International School Phuket. How to Win at Rock, Paper, Scissors You might think that winning at rock, paper, scissors was purely a matter of chance – after all mathematically each outcome has the same probability. 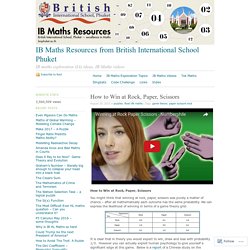 We can express the likelihood of winning in terms of a game theory grid: It is clear that in theory you would expect to win, draw and lose with probability 1/3. However you can actually exploit human psychology to give yourself a significant edge at this game. Below is a report of a Chinese study on the psychology of game players: Zhijian and co carried out their experiments with 360 students recruited from Zhejiang University and divided into 60 groups of six players. As an incentive, the winners were paid in local currency in proportion to the number of their victories. The results reveal a surprising pattern of behavior. But a closer inspection of their behavior reveals something else. Scientists find a winning strategy for rock-paper-scissors. A group of researchers from Chinese universities have written a paper about the role of psychology in winning (or losing) at rock-paper-scissors. 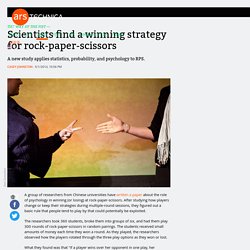 After studying how players change or keep their strategies during multiple-round sessions, they figured out a basic rule that people tend to play by that could potentially be exploited. The researchers took 360 students, broke them into groups of six, and had them play 300 rounds of rock-paper-scissors in random pairings. The students received small amounts of money each time they won a round. As they played, the researchers observed how the players rotated through the three play options as they won or lost. What they found was that "if a player wins over her opponent in one play, her probability of repeating the same action in the next play is considerably higher than her probabilities of shifting actions. 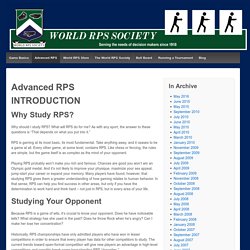 Why should I study RPS? What will RPS do for me? As with any sport, the answer to these questions is “That depends on what you put into it.” RPS is gaming at its most basic, its most fundamental. Take anything away, and it ceases to be a game at all. Playing RPS probably won’t make you rich and famous. Studying Your Opponent Because RPS is a game of wits, it’s crucial to know your opponent. Historically, RPS championships have only admitted players who have won in lesser competitions in order to ensure that every player has data for other competitors to study. The Role of a Trainer Some players choose to retain the services of a personal trainer. The Three Throws Equal but Not Equal. Dixit and Nalebuff. How to always win at rock, paper, scissors. In contrast, Kanae Ishibashi, the president of Christie’s Japan, began researching RPS strategies on the internet. 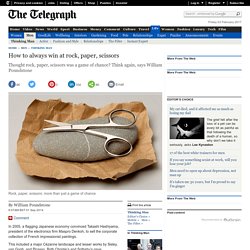 You may or may not be surprised to learn that an awful lot has been written on the game. Ishibashi had a break when Nicholas Maclean, Christie’s director of impressionist and modern art, mentioned that his 11-year-old twin daughters, Alice and Flora, played the game at school almost daily. Alice’s advice was “Everybody knows you always start with scissors.”

Flora seconded this, saying “Rock is way too obvious. . . . Since they were beginners, scissors was definitely the safest.” Both girls also agreed that, in the event of a scissors-scissors tie, the next choice should be scissors again — precisely because “everybody expects you to choose rock.” Ishibashi went into the meeting with this strategy, while the Sotheby’s rep went in with no strategy at all.