10 Mind-blowing Interactive Stories That Will Change the Way You See the World. Storytelling is at the cusp of a revolution. 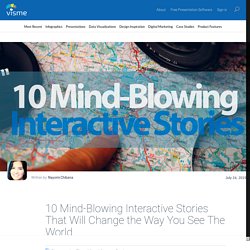 New media is relentlessly heading toward a future that is completely immersive, interactive and—most exciting of all—designed to please all five senses. From Facebook’s hefty investments in virtual reality technology to the production of real-time holographic displays, communication technology is steamrolling its way to what we once thought was the stuff of sci-fi movies and nothing more. Although we have some ways to go until we teleport ourselves directly to where the news is happening—scientists actually believe this is a possibility—for now, both mainstream and alternative media are diving headfirst into the production of interactive and immersive stories. To find out how you can incorporate some of these awesome storytelling techniques into your own content, check out our picks of the most breathtaking interactive narratives we’ve found across the Web. 1 The Boat It also teaches you a thing or two about masterful storytelling:

Speakout Elementary Video Podcast Unit 1 Welcome. Learn English - Passive Voice. Exercises on Passive Use of Passive Passive voice is used when the focus is on the action. 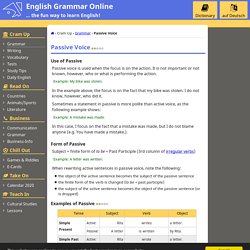 It is not important or not known, however, who or what is performing the action. Example: My bike was stolen. In the example above, the focus is on the fact that my bike was stolen. Sometimes a statement in passive is more polite than active voice, as the following example shows: Example: A mistake was made. In this case, I focus on the fact that a mistake was made, but I do not blame anyone (e.g. Form of Passive Subject + finite form of to be + Past Participle (3rd column of irregular verbs) Example: A letter was written. When rewriting active sentences in passive voice, note the following: the object of the active sentence becomes the subject of the passive sentence the finite form of the verb is changed (to be + past participle) the subject of the active sentence becomes the object of the passive sentence (or is dropped) Examples of Passive Level: lower intermediate Personal and Impersonal Passive. 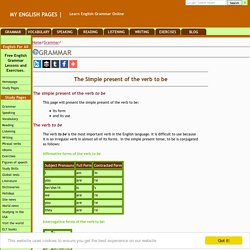 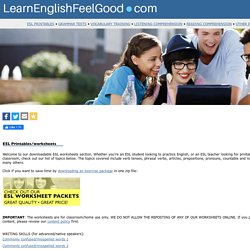