What is an Earthquake. Introduction to Earthquakes & Tsunamis Turn on the TV or read the newspapers and almost always there is something devastating happening somewhere as a result of sheer nature's power. 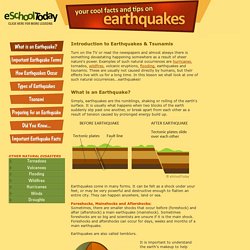 Examples of such natural occurrences are hurricanes, tornados, wildfires, volcanic eruptions, flooding, earthquakes and tsunamis. These are usually not caused directly by humans, but their effects live with us for a long time. In this lesson we shall look at one of such natural occurrences...earthquakes! What is an Earthquake? Simply, earthquakes are the rumblings, shaking or rolling of the earth's surface. Earthquakes come in many forms. Foreshocks, Mainshocks and Aftershocks: Sometimes, there are smaller shocks that occur before (foreshock) and after (aftershock) a main earthquake (mainshock). Earthquakes are also called temblors. It is important to understand the earth’s makeup to help understand earthquakes better.

The Mantle is semi-molten rock, also called magma. Earthquake! ©1995 The Regents of the University of California (576K) Earthquake Picture- Walking the line- Click for bigger version Introduction Earthquakes are one of the most powerful natural forces that can disrupt our daily lives. 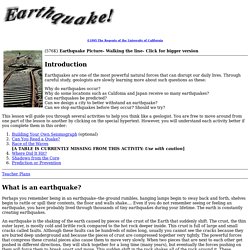 Through careful study, geologists are slowly learning more about such questions as these: Why do earthquakes occur? Why do some locations such as Califonia and Japan receive so many earthquakes? Hazard: Earthquake/Be smart. Map Information: The map is titled, "Forecasted Frequency of Earthquake Shaking Capable of Causing Damage Within the United States". 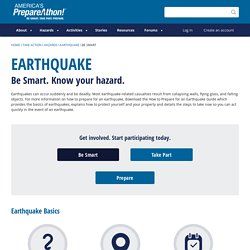 It depicts a map of the continental United States, Puerto Rico, Alaska, and Hawaii and illustrates state and county boundaries. The intensity of forecasted shaking (corresponding to level VI on the Modified Mercalli Intensity scale) is capable of the following: cracking windows; knocking dishes, glassware, knickknacks, and books off shelves and pictures off walls; moving or overturning furniture; and cracking weak plaster, adobe buildings, and some poorly built masonry buildings. Data source is the USGS National Seismic Hazard Mapping Project, updated in the following years: contiguous US-2014, Alaska-2007, Hawaii-1998, Puerto Rico and the US Virgin Islands-2003; forecasted frequency of a horizontal ground acceleration on firm rock of at least 7.2% g, which is an average acceleration corresponding to an MMI of VI. Bridge to Classroom: Engineering for Earthquakes. 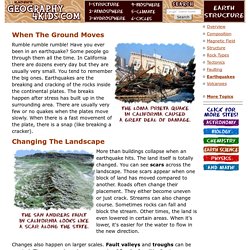 Have you ever been in an earthquake? Some people go through them all the time. In California there are dozens every day but they are usually very small. You tend to remember the big ones. Earthquakes are the breaking and cracking of the rocks inside the continental plates. More than buildings collapse when an earthquake hits. Changes also happen on larger scales. You might think, "If it only happens in one place, why can you feel them hundreds of miles away?

" When scientists analyze an earthquake they look at several parts. After an earthquake, you can turn on the television and see all sorts of footage showing buildings that didn't quite survive. Or search the sites for a specific topic. Earthquakes 101. Geoscience Australia — Earthquakes @ GA. Earthquake-Report.com. BGS Earthquake Seismology. Earthquakes. Earthquakes are sudden rolling or shaking events caused by movement under the earth’s surface. 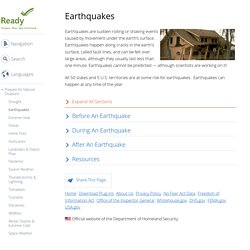 Earthquakes happen along cracks in the earth's surface, called fault lines, and can be felt over large areas, although they usually last less than one minute. Earthquakes cannot be predicted — although scientists are working on it! All 50 states and 5 U.S. territories are at some risk for earthquakes. Earthquakes can happen at any time of the year. Before An Earthquake Look around places where you spend time. Video Player View in FEMA Multimedia Library During An Earthquake If you are inside a building: Stay where you are until the shaking stops. If getting safely to the floor to take cover won’t be possible: Live Earthquakes Map. Earthquake. Global plate tectonic movement Earthquakes are measured using observations from seismometers. 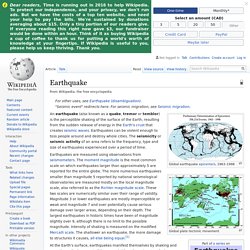 The moment magnitude is the most common scale on which earthquakes larger than approximately 5 are reported for the entire globe. The more numerous earthquakes smaller than magnitude 5 reported by national seismological observatories are measured mostly on the local magnitude scale, also referred to as the Richter magnitude scale. These two scales are numerically similar over their range of validity. Magnitude 3 or lower earthquakes are mostly imperceptible or weak and magnitude 7 and over potentially cause serious damage over larger areas, depending on their depth. At the Earth's surface, earthquakes manifest themselves by shaking and sometimes displacement of the ground. What is Disaster Risk Reduction? - UNISDR. Disaster risk reduction (DRR) There is no such thing as a 'natural' disaster, only natural hazards. 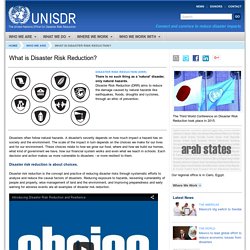