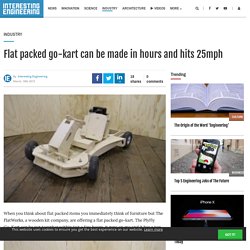 The PlyFly Go-Kart can be put together within just a few hours, it runs on gas and it has a top speed of 25mph. [Image Source: Flatworks] The PlyFly Go-Kart is offered in two different types; one a 2.5 horsepower and the other a 4 horsepower. The faster of the two has a top speed of 25mph, while the smaller offers 17mph. The larger of the two can run for two and a half hours on one single tank of gas and the smaller engine runs for around an hour. Both of the engines on offer are 4 stroke clones of Honda engines that have been assembled in China and of course they meet the strict US emissions requirements. 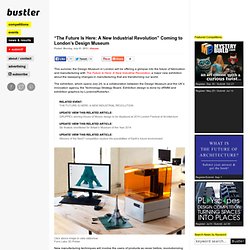 The exhibition, which opens July 24, is a collaboration between the Design Museum and the UK’s innovation agency, the Technology Strategy Board. Exhibition design is done by dRMM and exhibition graphics by LucienneRoberts+. Click above image to view slideshowForm Labs 3D Printer New manufacturing techniques will involve the users of products as never before, revolutionizing the role of the consumer.

The boundaries between designer, maker and consumer are disappearing with a growing movement of ‘hacktivists’, who share and download digital designs online in order to customize them for new uses. Click above image to view slideshowKuka Robotics. The future is here at Design Museum / toothpicnations. Main and bottom left: The future is here exhibition designed by by Lucienne Roberts+ and drMM; Bottom right: KUKA Robotics' AGILUS robots Work has kept me quite busy lately, but I finally managed to visit "The future is here: a new industrial revolution" exhibition at the Design Museum on its last day at the last hours! 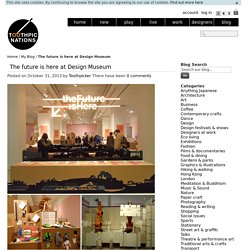 We have all witnessed the industrial revolution ( I mean at the 2012 Olympics Opening ceremony directed by Danny Boyle), and this exhibition focused on the possibility of a new one based on the past, current industry trends and technology. F bunk bed   Rafa-Kids. CNC Panel Joinery Notebook. I’ve been collecting clever ways of slotting flat stock together since I first read Nomadic Furniture back in 1999, well before the advent of the accessible hobby-class CNC tools that today make manufacturing parts like these pretty easy. 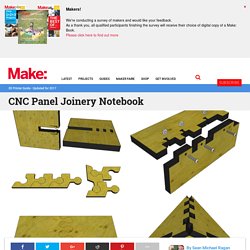 Now, the world is full of people designing models, project enclosures, sculpture, furniture, and all kinds of other cool stuff to be assembled from parts made on laser cutters and CNC routers. I keep expecting a definitive book or website to emerge that covers the “bag of tricks” in an organized way, but so far, I haven’t found it. Maybe this article can serve as a jumping-off point. In any case, I think it’s time to share my notebook of CNC panel joinery.

In presenting this material, I want to first acknowledge my respect for the world’s established and ancient traditions of joinery. I may abuse some terms, without meaning to, and I am glad to be corrected by those who are in the know about traditional joinery. Laser vs. Biasing Cross (“X”) Joints. OpenDesk - Design for Open Making. WikiHouse. Open source work space. Made in the Future. Nervous System. Precious Plastic open-source recycling machines. Dutch Design Week 2013: Design Academy Eindhoven graduate Dave Hakkens has made his own machines for recycling plastic to make new products locally and plans to share the designs so others around the world can do the same. 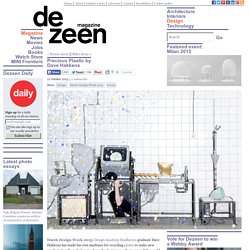 The Precious Plastic machines by Dave Hakkens include a plastic shredder, extruder, injection moulder and rotation moulder, which are all based on industrial machines but modified to be less complex and more flexible. "Of all the plastic thrown away, I've heard that we recycle just ten percent and I wondered why we recycle so little," Hakkens told Dezeen at the Design Academy Eindhoven graduation show opening on Saturday. One of the issues turned out to be a lack of demand for recycled material from factories, so he visited a range of firms making plastic products to ask why they weren't using recycled plastic. He found that difficulties with sorting plastics for recycling make the resultant material less reliable than brand new plastic. Shoe factory by Eugenia Morpurgo brings production to high streets. Italian designer Eugenia Morpurgo has set up a high-street micro factory, which uses digital manufacturing to produce her range of customisable shoes that wearers can assemble and repair themselves. 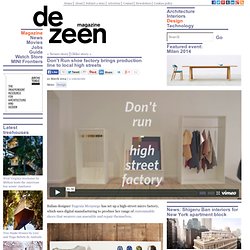 Called Don't Run - Beta, the project is a collaboration between Eugenia Morpurgo and British-Spanish designer Juan Montero to create a production line for leather shoes, so the buyer can customise their new footwear and see it being produced in-store on a laser cutter and 3D printer. Morpurgo first launched her canvas repairable shoes – that can be repaired easily because they're joined with reversible, mechanical fastenings rather then the usual stitches or glue – in 2011. Now she has followed up with a new range of colourful sandals, lace-ups and boots using the same system, but with leather uppers designed by Sophia Guggenberger, Anastasija Mase and Eliška Kuchtová. Customers first choose the style of shoe they want and the pattern is adjusted to their size on-screen. Henk Lamp by Jos Blom. Easily deconstructed: Henk Lamp by Jos Blom announces itself as simple, two wooden pieces that slot together to form a tripod base with built-in carrying handle, and two translucent plastic shells as a diffuser, all held together by an easily removed elastic band. 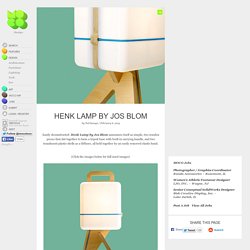