75% Of Ikea’s Catalog Is Computer Generated Imagery. The best special effects are often the ones you never notice--which may make Ikea the most skillful special effects studio in the world. 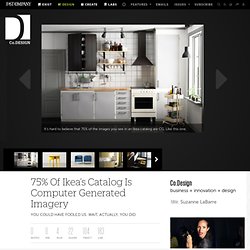 The Swedish furniture company has been aggressively ramping up its use of computer generated imagery in their catalogs. Ikea's first CG photo was a Bertil pinewood chair in 2006. By 2012, the Wall Street Journal reported that 25% of their products were CG. Today, that figure has ballooned to 75%. Yes, that means three out of four things you see in an Ikea catalog are fake. CGSociety recently published a deep look at Ikea's in-house production studio, which is responsible for the shift, and it’s full of fascinating factoids. In essence, Ikea is creating digital furniture at the real-world scale. Ikea has made the shift to a majority-CG catalog in just eight years, and it seems that a decent chunk of that 25% holdout consists of creative set pieces that aren't part of Ikea's stock, though even some of that has been going digital, too. 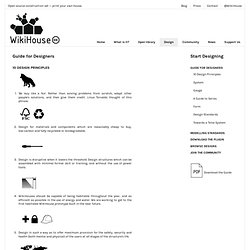 Rather than solving problems from scratch, adapt other people's solutions, and then give them credit. Linus Torvalds thought of this phrase. Design for materials and components which are reasonably cheap to buy, low-carbon and fully recyclable or biodegradable. Design is disruptive when it lowers the threshold. WikiHouses should be capable of being habitable throughout the year, and as efficient as possible in the use of energy and water. Design in such a way as to offer maximum provision for the safety, security and health (both mental and physical) of the users at all stages of the structure's life. As a general rule, design for the climate, culture, economy and legal / planning framework in which you live, and you know best.

Share your work as much and as openly as possible, it might come back better. "It is easier to ship recipes than cakes and biscuits" - John Maynard Keynes Design to dismantle. Design for mistakes. A Series Sections 1.2m wide. Www.ikea.com/us/en/assembly_instructions/brimnes-daybed-frame-with-drawers__AA-510318-11_pub.pdf. Home furnishings, kitchens, appliances, sofas, beds, mattresses.

Designing Effective Step-By-Step Assembly Instructions. Some Assembly Required: The Importance of Good Documentation. Posted on October 15, 2012 Submitted By: Doug Sasse Few phrases can create as much trepidation as “some assembly required.” 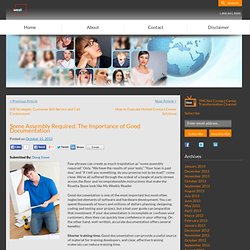 Only, “We have the results of your tests,” “Your loan is past due,” and “If I tell you something, do you promise not to be mad?” Come close. We’ve all suffered through the ordeal of a tangle of parts strewn across the floor and incomprehensible instructions that make the Rosetta Stone look like My Weekly Reader. Good documentation is one of the most important but most often neglected elements of software and hardware development. Shorter training time. Reduced calls to your support line. Increased customer confidence. Improved customer return on investment. More effective problem correction and system improvement. Good documentation is not a necessary evil; it’s one of the most important forms of communication that you have with your customer. Related posts: Self-Assembly Lab.