Analysis: The Coke vs Pepsi Social Presence Showdown. Maintaining a near duopoly on soda products, Coke and Pepsi are natural enemies. 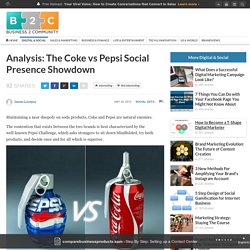 The contention that exists between the two brands is best characterized by the well-known Pepsi Challenge, which asks strangers to sit down blindfolded, try both products, and decide once and for all which is superior. The general consensus from the taste test was that Pepsi was better. Of course, identifying which product is preferred is not really that simple. Furthermore, as Malcolm Gladwell points out, there are a few qualms with the methodology of the “sip test,” which was put on by PepsiCo. Yet beyond the interaction of the fizzy soda against our palates there is another reaction affecting our tastes. Recommended for YouWebcast: Your Viral Voice: How to Create Conversations that Convert to Sales As any marketer will point out, a consumer’s experience is also influenced by every exposure to the brand’s messaging along the way. This is the Coke-Pepsi Social Presence Showdown. The data dump The final decision. Mobility: How to Manage and Secure Mobile Devices in Your Enterprise.

Social Business, implementation, Enterprise 2.0 (with tweets) · leonardmilan. Social enterprise 2.0. Getting to Social. You are engaging with social media for marketing and customer support. 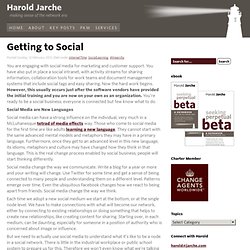 You have also put in place a social intranet, with activity streams for sharing information, collaboration tools for work teams and document management systems that include social tags and easy sharing. Now the hard work begins. However, this usually occurs just after the software vendors have provided the initial training and you are now on your own as an organization. You’re ready to be a social business; everyone is connected but few know what to do. Social Media are New Languages Social media can have a strong influence on the individual, very much in a McLuhanesque tetrad of media effects way. Social media change the way we communicate. Each time we adopt a new social medium we start at the bottom, or at the single node level. But we need to actually use social media to understand what it’s like to be a node in a social network. The Transparent Workplace Setting the Example Blind Leading the Blind. 2012 E20 Summit Metrics.

What Are The Core Principles of Collaboration? The notion of how we collaborate has been one that whilst often discussed has never really been nailed down. 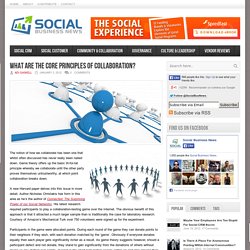 Game theory offers up the basic tit-for-tat principle whereby we collaborate until the other party proves themselves untrustworthy, at which point collaboration breaks down. A new Harvard paper delves into this issue in more detail. Author Nicholas Christakis has form in this area as he’s the author of Connected: The Surprising Power of our Social Networks. His latest research required participants to play a collaboration-testing game over the Internet. The obvious benefit of this approach is that it attracted a much larger sample than is traditionally the case for laboratory research. Participants in the game were allocated points.

The mechanics of the game saw it split into three distinct rule sets. In all versions of the game approximately 60% of players co-operated to begin with. Furthermore, as they were shunned, the defectors began to change their behavior.