Politique philippine - Politics in the Philippines 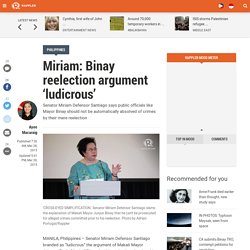 Photo by Adrian Portugal/Rappler MANILA, Philippines – Senator Miriam Defensor Santiago branded as “ludicrous” the argument of Makati Mayor Jejomar Erwin “Junjun” Binay that his reelection absolves him of liability over the supposedly overpriced Makati City Hall parking building. Santiago filed a bill to make public officials liable for crimes they committed in past terms. “That is a cross-eyed simplification of the problem. Senate bill 2716 amends the Anti-Graft and Corrupt Practices Act to make an elected official liable for any wrongdoing committed during a previous term even if he or she was reelected. 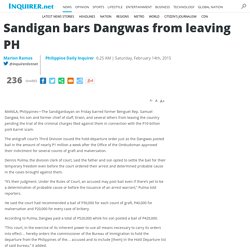 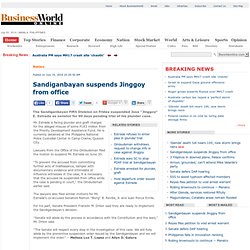 Estrada is facing plunder and graft charges for the alleged misuse of some P183 million from the Priority Development Assistance Fund. He is currently detained at the Philippine National Police Custodial Center in Camp Crame, Quezon City. Pangasinan mayor killed on eve of anniversary, son’s wedding. DAGUPAN CITY – Two armed men shot and killed Urbiztondo town Mayor Ernesto Balolong Jr., his police escort and an electrician on Saturday near an area in the town where the mayor was supposed to hold his 25th wedding anniversary party today, Sunday. 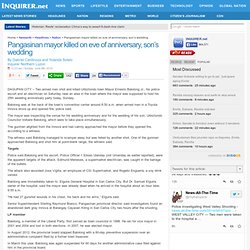 Balolong was at the back of the town’s convention center around 8:50 a.m. when armed men in a Toyota Innova drove up and opened fire, police said. The mayor was inspecting the venue for his wedding anniversary and for the wedding of his son, Urbiztondo Councilor Voltaire Balolong, which were to take place simultaneously.

The gunmen alighted from the Innova and had calmly approached the mayor before they opened fire, according to a witness.

Whistle-blower of P10-B pork barrel scam faces arrest. The principal whistle-blower in the misuse of P10 billion in pork barrel funds is facing arrest following the resolution of theft charges brought against him by the alleged brains behind the scam. 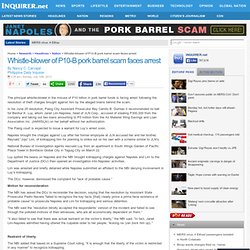 In his June 25 resolution, Pasig City Assistant Prosecutor Rey Camilo B. Dumlao II recommended no bail for Benhur K. Luy, whom Janet Lim-Napoles, head of JLN Corp., accused of stealing P300,000 from the company and taking out two loans amounting to P5 million from the Air Materiel Wing Savings and Loan Association Inc. (AMWSLAI) on her behalf without her authorization. The Pasig court is expected to issue a warrant for Luy’s arrest soon.

Napoles brought the charges against Luy after her former employee at JLN accused her and her brother, Reynald “Jojo” Lim, of kidnapping him for planning to strike out on his own with a scheme similar to JLN’s. Lim was arrested and briefly detained while Napoles submitted an affidavit to the NBI denying involvement in Luy’s kidnapping.

Showiz and politics in the Philippines 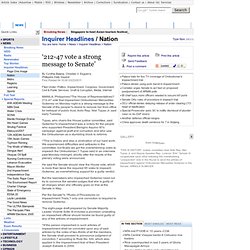 The House of Representatives? 212-47 vote that impeached Ombudsman Merceditas Gutierrez on Monday night is a strong message to the Senate of the people? S desire to remove her from office for betrayal of public trust, Iloilo Rep. Niel Tupas Jr. said early Tuesday. Tupas, who chairs the House justice committee, said Gutierrez? ? He said the Senate should view the House vote, which is more than twice the required 95 votes to impeach Gutierrez, as overwhelming support for a guilty verdict. Statement of presumptive Manila Mayor Joseph “Erap” Estrada. Race for Mayor of Manila unofficial results. 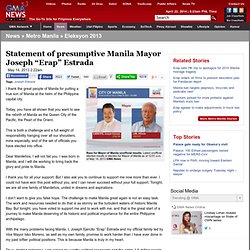 Latest unofficial election results in election for Mayor of Manila as of 12:51 a.m. of May 14, 2013 GMA News I thank the great people of Manila for putting a true son of Manila at the helm of the Philippine capital city. Today, you have all shown that you want to see the rebirth of Manila as the Queen City of the Pacific, the Pearl of the Orient. This is both a challenge and a full weight of responsibility hanging over all our shoulders, mine especially, and of the set of officials you have elected into office.

Dear Manileños, I will not fail you. I thank you for all your support. I don’t want to give you false hope. With the many problems facing Manila, I, Joseph Ejercito “Erap” Estrada and my official family led by Vice Mayor Isko Moreno, as well as my own family, promise to work harder than I have ever done in my past loftier political positions.