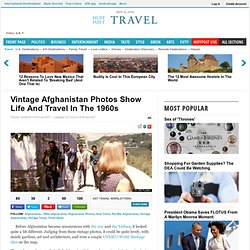 Judging from these vintage photos, it could be quite lovely, with stately gardens, art and architecture, and even a couple UNESCO World Heritage sites on the map. These photos, shot mostly in Kabul in 1967-68 (more than a decade before the Soviet invasion) by Dr. Bill Podlich, can be seen on a website maintained by Clayton Esterson. They document the time Podlich spent there as a teacher at the city's Higher Teachers College, according to the Denver Post. 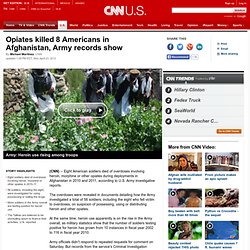 Army investigative reports. The overdoses were revealed in documents detailing how the Army investigated a total of 56 soldiers, including the eight who fell victim to overdoses, on suspicion of possessing, using or distributing heroin and other opiates. At the same time, heroin use apparently is on the rise in the Army overall, as military statistics show that the number of soldiers testing positive for heroin has grown from 10 instances in fiscal year 2002 to 116 in fiscal year 2010. Pakistan PM to Meet Qataris on Taliban Office. Afghanistan: The Trials of Woman Paratrooper Khatool Mohammadzai. Upper Gereshk: The Helmand plan meets tough reality. 2 October 2011Last updated at 00:31 By John Cantlie Gereshk Valley, Helmand "This place makes you old fast," one marine told me After 10 years in Afghanistan, foreign troops can claim successes in the notorious province of Helmand - but a vicious guerrilla war still rages in the Upper Gereshk valley, which US marines are in the process of handing back to British forces. 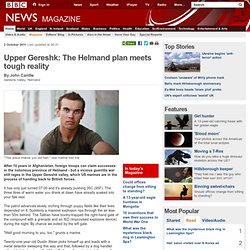 It has only just turned 07:00 and it's already pushing 35C (95F). The three litres of warm water you drank at dawn have already soaked into your flak vest. The patrol advances slowly, inching through poppy fields like their lives depended on it. Saffron could displace opium poppies as Afghans’ cash crop of choice. Farmers’ fields outside the western Afghanistan city of Herat are about to blossom into a purple form of gold. 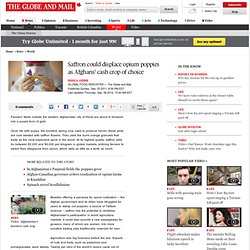 Once rife with poppy, the lucrative spring crop used to produce heroin, these plots are now seeded with saffron flowers. They yield the burnt orange granules that trade as the most expensive spice in the world. Kabul Hipster (KabulHipster) sur Twitter. Taliban and Nato-led forces engage in war of words on Twitter. As the 20-hour assault by Taliban insurgents on Kabul's diplomatic and military enclave drew to a close on Wednesday, insurgents and coalition forces decided to prolong the battle the modern way: on Twitter. 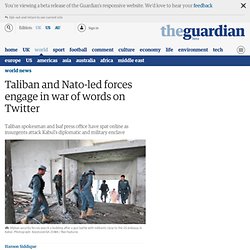 If the continued insurgency in Afghanistan represents a failure of dialogue, the spat between the Taliban and the press office of the international security assistance force (Isaf) on Wednesday proved that they are ready to exchange words directly, even if their comments offered little hope of peace being forged anytime soon. The argument began when @ISAFmedia, which generally provides dry updates in military speak of the security situation in Afghanistan, took exception to comments from a Taliban spokesman, tweeting: "Re: Taliban spox on #Kabul attack: the outcome is inevitable.

Question is how much longer will terrorist put innocent Afghans in harm's way? " @ISAFmedia was moved to respond by providing statistical backing for its case. Alcidé Pingouin (M_Pingouin) sur Twitter. Troops retake Afghan building after deadly, hours-long raid by insurgents, officials say. KHOST, Afghanistan — Not long after dawn broke Sunday in this southeastern city, four men dressed as Afghan police drove up to a downtown checkpoint. In the back seat of their white Toyota Corolla were 300 pounds of homemade explosives, wired to a trigger on the driver’s side.

Two of the passengers wore suicide vests. Ten hours later, after an intense day of close-quarters gun battles inside government offices and a suicide blast, three Afghan police officers and two Afghan soldiers were dead, two U.S. soldiers were wounded, and three of the four attackers had been killed. The fighting was the latest attempt by insurgents to target government forces in the heart of major Afghan cities. U.S. urged allies to boost cell phone service to target terrorists: WikiLeaks. 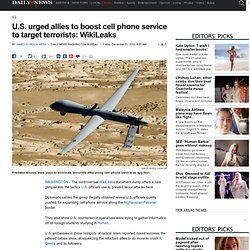 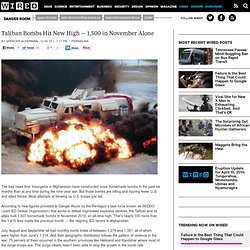 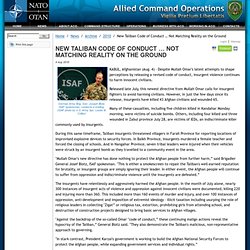 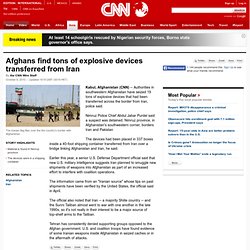 Germans, Britons linked to Europe plot killed in recent US Predator strike. Eight Germans and two Britons were killed in the same airstrike that killed an Islamic Jihad Group commander who trained Europeans to carry out attacks in England, France, and Germany. 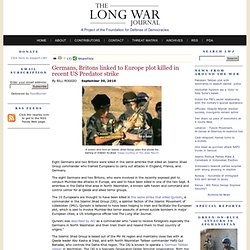 The eight Germans and two Britons, who were involved in the recently exposed plot to conduct Mumbai-like attacks in Europe, are said to have been killed in one of the two Sept. 8 airstrikes in the Datta Khel area in North Waziristan, a known safe haven and command and control center for al Qaeda and allied terror groups. The 10 Europeans are thought to have been killed in the same strike that killed Qureshi, a commander in the Islamic Jihad Group (IJG), a splinter faction of the Islamic Movement of Uzbekistan (IMU). Qureshi is believed to have been helping to train and facilitate the European plot, which is said to involve Mumbai-like terror assaults of armed suicide bombers in major European cities, a US intelligence official told The Long War Journal.

"No-Go" Tribal Areas Became Basis for Afghan Insurgency Documents Show. 9/11 retrospectives. With the anniversary approaching once again, James Fallows has collected some excellent essays on the legacy of the event. I'll add two more that I have come across recently. The first is this devastating piece of understatement in Hugh White's Quarterly Essay, 'Power shift: Australia's future between Washington and Beijing':

9/11 and the 9-Year War. By George Friedman It has now been nine years since al Qaeda attacked the United States. It has been nine years in which the primary focus of the United States has been on the Islamic world. In addition to a massive investment in homeland security, the United States has engaged in two multi-year, multi-divisional wars in Iraq and Afghanistan, inserted forces in other countries in smaller operations and conducted a global covert campaign against al Qaeda and other radical jihadist groups. Zakaria: Why America Overreacted to 9/11.

Obama: One war down, one to go. It's interesting to read President Obama's remarks about the end of combat operations in Iraq in light of Peter Beinart's speech to the Lowy Institute last week . Beinart argued that the central mission of Obama's presidency is economic — to make America 'solvent' again. To do that, he has to get his country out of two expensive wars while trying to avoid looking wimpish to his Republican opponents.

There's enough in Obama's remarks to reinforce Beinart's thesis: Afghan war through the eyes of the Taliban. By James White Updated: 14:13 GMT, 30 August 2010 A documentary made by a Norwegian journalist embedded with Taliban fighters has provided a rare glimpse of the other side of the Afghanistan conflict. The raw footage - captured by Paul Refsdal - shows the Afghan militants attacking U.S. convoys on a road below their mountainous hide-out and celebrating hits with a high-five. The men also show their softer side to the Norwegian journalist by singing, reciting verses from the Koran and even brushing their long hair as he quietly records their day-to-day activities. Facing Afghan mistrust, al-Qaeda fighters take limited role in insurgency. International Institute for Strategic Studies 15 Oct 2009 - Discussion Meeting - 'Reconciliation with the Taliban: The View from Kabul'

Afghanistan Conflict Monitor. Who's Winning the War in Afghanistan? President Barack Obama’s surprise visit to Afghanistan Sunday comes almost exactly one year after his strategic review of American policy toward Afghanistan and Pakistan was completed last March. In announcing the policy that flowed from that review, Obama said his goal in what is now our longest war is to disrupt, dismantle and defeat al Qaeda’s bases there and prevent it from using them to threaten Americans at home and abroad. A year later, it is a good time to look at how we are doing. Today al Qaeda is under unprecedented pressure in its Pakistani lair. CIA drone attacks are killing key leaders and disrupting operations. The number of such attacks doubled last year over 2008, and the pace this year is even faster. Al Qaeda is fighting back hard. Pakistan and the U.S. just concluded a high-level strategic dialogue in Washington last week aimed at trying to improve cooperation and coordination between two deeply mistrustful partners.

Getting Out Early versus Staying In Too Long: Which is Worse. It's easy to think of examples where great powers stayed in in some foreign war too long, and with the benefit of hindsight, it's clear that they would have been better off getting out sooner. Examples might include the United States in Vietnam, France in Algeria, Britain and the Soviet Union in Afghanistan, or Israel in southern Lebanon. Similarly, it's easy to think of wars when states suffered early setbacks, chose to stay the course anyway, and ultimately succeeded.

World Wars I and II, Korea, and the Boer War might be examples of this category, and some would place Iraq in this category too (although I wouldn't). Finally, I can think of several cases where states chose to get out of trouble quickly when things turned south, and never regretted it. Afghanistan — and the winner is ... 2014. Untitled. Opposition groups are puppets of Iran, Pakistan and India, Afghan officials tell US in private meeting.