The Future of Ocean Freight – Unpacking the Logistics Blockchain Goldrush - Shipping and Freight Resource. “Glaring inefficiencies – the company I was with wasn’t helping the industry move forward, despite the clear need for something new.” – Stephan Kukman, Founder, CEO, CargoX “Right now there are thousands of people on scooters driving around southeast Asia with backpacks full of bills of lading–negotiable financial instruments! 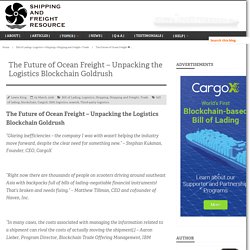 That’s broken and needs fixing.” – Matthew Tillman, CEO and cofounder of Haven, Inc. “In many cases, the costs associated with managing the information related to a shipment can rival the costs of actually moving the shipment[.] – Aaron Lieber, Program Director, Blockchain Trade Offering Management, IBM Stephan Kukman had more than a decade under his belt at a major logistics company, but the more time he spent on the job, the more frustrated he became with the industry’s unwillingness to address what he called, “glaring inefficiencies.” That realization prompted Kukman to quit his job and found CargoX. The big players are just as motivated. Enhanced Transparency. DNV GL contemplates ditching German branding. Having finally assumed full control of the group in December top management at class society DNV GL is contemplating dropping the GL branding of the company. 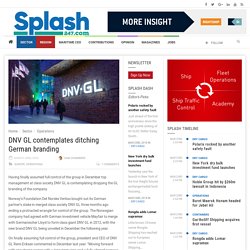 Norway’s Foundation Det Norske Veritas bought out its German partner’s stake in merged class society DNV GL three months ago ending a protracted wrangle for control of the group. The Norwegian company had agreed with German investment vehicle Mayfair to merge with Germanischer Lloyd to form class giant DNV GL in 2012, with the new brand DNV GL being unveiled in December the following year. On finally assuming full control of the group, president and CEO of DNV GL Remi Eriksen commented in December last year: “Moving forward with one strong owner with a long-term view and a fully aligned purpose will be good for DNV GL’s customers and employees.” The class society has since initiated a major branding survey. Regardless of the possible rebrand, DNV GL has been keen to stress that it will keep its maritime headquarters in Hamburg. Why Cosco, not Maersk, may be the one to beat in door-to-door integrated logistics. When Maersk announced a major refocusing of its business and combined the maritime and logistics businesses under one roof, the world of shipping took notice. 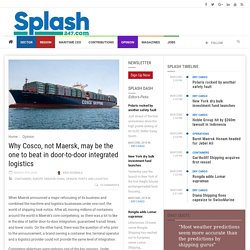 After all, moving millions of containers around the world is Maersk’s core competency, so there was a lot to like in the idea of better door-to-door integration, guaranteed transit times, and lower costs. On the other hand, there was the question of why, prior to the announcement, a brand owning a container line, terminal operator and a logistics provider could not provide the same level of integration. Competing objectives were perhaps one of the key reasons. Under normal circumstances, a strong carrier like Maersk can demand the terminal to give it preferential windows, volume discount breaks, and lower costs per move. The terminals, facing increasing costs of operations, would be vigorously defending their pricing and their bottom lines. 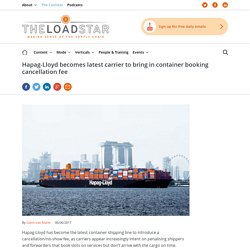 The German carrier has announced a $60 fee for all export shipments from Singapore to India from 9 June on “all bookings which are cancelled within three calendar days prior to vessel arrival”. It would appear carriers are increasingly “testing the water” with cancellation fees on selected, smaller-volume tradelanes The fee follows a similar announcement from CMA CGM on shipments out of Europe to ports in the Indian subcontinent, Middle East Gulf and Red Sea. “CMA CGM has been facing a large number of shortfalls due to late cancellations, preventing us from accepting bookings on behalf of other valued customers,” the company said. “Due to strong demand for exports in corridors from North Europe to Middle East, Red Sea and IPBS [India, Pakistan. Hapag-Lloyd finally completes merger with UASC - The Loadstar. © Jannis Werner Hapag-Lloyd and UASC today pushed through further consolidation in the liner shipping industry as the pair finally completed their merger. 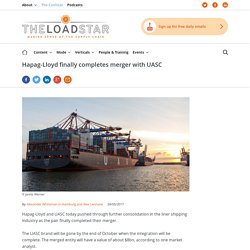 The UASC brand will be gone by the end of October when the integration will be complete. The merged entity will have a value of about $8bn, according to one market analyst. A Hapag-Lloyd spokesperson told The Loadstar: “One of the biggest benefits will be cost savings: cost-cutting behaviour can be copied, but true synergies can only be achieved through M&A activity. “By acquiring UASC we will have the youngest and largest, on average, fleet in the world. “It will also greatly diversify our product portfolio.”

The lines expect to see annual synergies of about $435m, with a significant portion realised next year and the full amount achieved in 2019. Mitsui O.S.K. Lines. Containership MOL PERFORMANCE Service network covers the world MOL's containership services link the world. 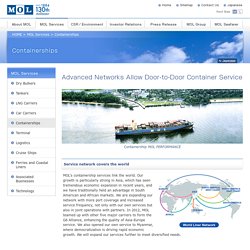 Our growth is particularly strong in Asia, which has seen tremendous economic expansion in recent years, and we have traditionally held an advantage in South American and African markets. We are expanding our network with more port coverage and increased service frequency, not only with our own services but also in joint operations with partners.

Incoterms. RulesA) It is the seller's primary duty to deliver the goods on board the vessel named by the buyer at the named port of shipment on the date or within the period stipulated and in the manner customary at the port. the reference "the manner customary as the port" highlights the problem of using the passing of the ship's rail as the guiding factor in practice. 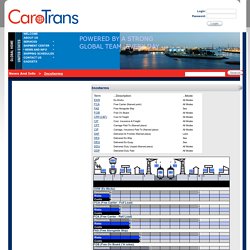 The parties in these circumstances will have to follow the custom of the port regarding the actual measures to be taken in delivering the goods onboard. Usually the task is performed by stevedoring companies, and the practical problem normally lies in deciding who should bear the costs of their services.B) Special agreement to be made to establish who is responsible for 'trimming' or 'lashing and securing'.C) Special agreement to be made to establish who actually is to pay import duty and/or other import taxes. 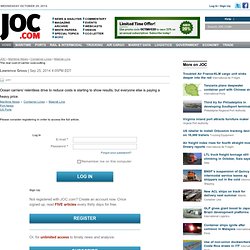 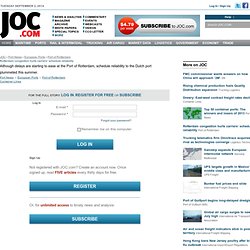 How to differentiate BL and HBL? What is the Difference between BL and HBL? 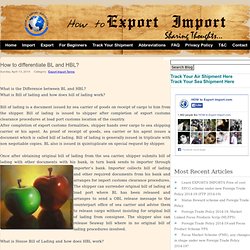 Bill of Lading. Bill of Lading (sample, PDF) Bill of Lading released by our company (sample, JPG) The document which covers transport by sea. Signed by the carrier, whether a shipping line or a freight forwarder, it serves as a receipt to the consignor for the goods, as evidence of the contract of transport containing the conditions of transport, and as a document of title by which possession of the goods can be transferred. Typically a B/L is issued in a set of three signed originals or negotiables, one of which must be presented to claim the goods upon which the others become void. Bills of Lading. You see it almost everyday, you endorse it, stamp it, keep it in your files for years, you pay thousands of dollars to a bank sometimes to get a hold of this piece of paper, sometimes you take it to your lawyer.

Carriers accelerate drive for ship scale economies. Informationen zu Frachtberechnung Seefracht. Shipping and Logistics - Cargo Insurance Documents and Information. Rate quoted and agreed should be entered on the B/L and or invoice Copy of ocean bill of lading, air waybill or straight bill, as applicable, to include: place of origin port of departure and departure date port of arrival and arrival date final destination transshipment point(s), if any vessel name and voyage number mark and numbers Special instructions, if any (including letter of credit requirements, special shipping conditions, etc.) Name, address, contact and phone number of party to be shown as insured party Instructions for distribution of certificate originals and copies Payment information/bill-to party Insurance certificates issued include the following information and instructions: All necessary information and documents should be received by Crowley prior to departure of shipment.