Bookies predict the winners of football matches less successfully. Football-Data. Basics of Betting as a Way of Keeping Score. Another preparatory step before I start learning about stats in the context of Formula One… There are a couple of things I’m hoping to achieve when I actually start the journey: 1) finding ways of using stats to help to pull out patterns and events that are interesting from a storytelling or news perspective; 2) seeing if I can come up with any models that help forecast or predict race winners or performances over a race weekend. 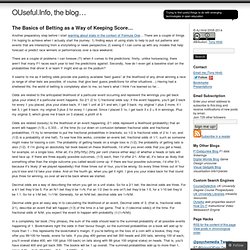 There are a couple of problems I can foresee (?!) When it comes to the predictions: firstly, unlike horseracing, there aren’t that many F1 races each year to test the predictions against. A working life: The quantitative analyst. Rob Mastrodomenico has just got back from a lunchtime kickabout with his colleagues. 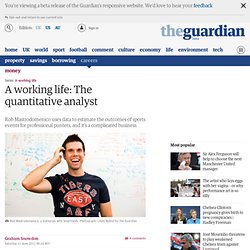 "I'm still a bit out of breath," he says apologetically, despite looking considerably less out of breath than I do after the short walk from Kentish Town tube station. I assume they've all been playing on nearby Hampstead Heath but his reply is unexpected: "No, in a client's back garden. " Come again? "One of our clients has a massive back garden with a modified tennis court," he explains. "We see him round the office a lot and he invites us down to play. Walking into Smartodds, where Mastrodomenico is a quantitative analyst – mercifully abbreviated to a less tongue-twisting "quant" – is a disorientating experience. 5 Simple Ways Of Improving The Price Of A Strong Favourite. There are many occasions when you fancy a strong favourite to win a match but the odds on offer are far too low. 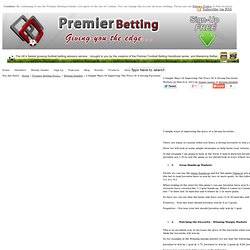 Here we will look at some simple strategies to help boost your returns should the favourite win. In this example I am going to look at the Serie A match between Juventus & Catania. When looking at the current odds Juventus are 1.33 to win the game so we should look at ways where we can improve on this price. 1. Asian Handicap Markets Firstly we can use the Asian Handicap and for this game Pinnacle are quoting Juventus -1.5 goals at 1.89. When looking at the stats for this game I can see Juventus have won 6 of their last 10 at home to mid table sides and 5 of these 6 victories have covered the -1.5 goal handicap. So here we can see that the home side have won 13 of 20 matches and 11 of these 13 victories were by 2 goals or more. Positives – Your bet wins should Juventus win by 4 or 5 goals. Negatives – You lose your bet should Juventus only win by 1 goal. 2. 3. Half Time / Full Time Market. In the last post on Half Time/Full time Betting I showed you how to find a winning edge in the HT/FT markets and covered the selection process. 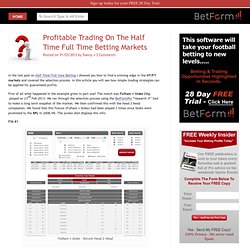 In this article you will see how simple trading strategies can be applied for guaranteed profits. Looking for Late Goals and Assessing Premier League Matches at Half time. Looking at Bundesliga 2, Bundesliga and the Barnet game on Friday 19th October we see a common goal theme. 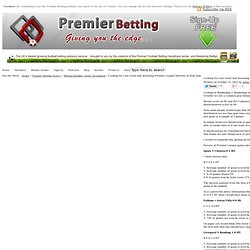 Barnet score on 90′ and 90+3 minutes, Hoffenheim score on 89 and Furth score on 90, Ingolstadt score on 88′ and Kaiserslautern score on 90. Now some people would argue that this is random as football is about two teams kicking a ball but if we look at goal time distribution we see that goal rates steadily increase over the course of a game so you should not be surprised that there were 6 late goals in a sample of 5 games. In simple terms you should look at games where ideally both teams are pushing forward for a goal which will be reflected in the shot on target data or if one team are pushing forward then you might get lucky when the other team counter.

It should always be remembered there is no point randomly laying the correct score near the end of a game if the data shows that teams are just sitting back or lacking penetration going forward. Spurs V Chelsea 0-1 HT. 1. Looking for Late Goals in Championship Matches. While many of you may have been watching Champions league football last night there were some great betting opportunities in the Championship matches. 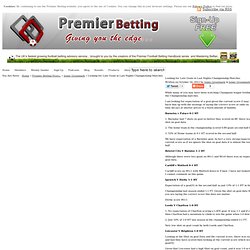 I am looking for expectation of a goal given the current score (I may have that put on my gravestone) and shot on goal data to back that up with the strategy of laying the correct score at odds on. I would suggest feeding in LAYS at 1.5 and keep laying as time decays at shorter prices to a fixed amount of liability. Barnsley v Palace 0-1 HT 1. Effect of a Red Card on Goal Expectation. On Sunday 21st October there were two red cards in the 2 Premier League games and the question is how should you react to a red card from a betting perspective. 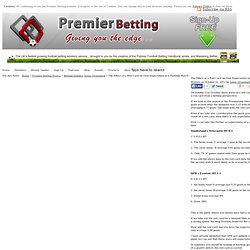 If we look at this season in the Premiership then the average time for each dismissal was 56 minutes and the average number of goals scored after the dismissal was 1.15 with the team down to 10 men averaging 0.38 goals and the team with 11 men averaging 0.77 goals. The team with the red card contributed 33 percent of the goals. Spotting the flaws in casino card-shuffling machines. Jamie Condliffe, contributor (Image: Etienne Ansotte/Rex Features) Ever feel like others at your poker table seem to have an unfair advantage? 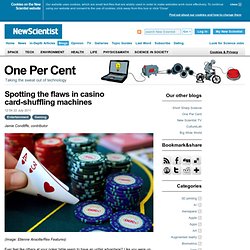 Roulette beater spills physics behind victory. A PROMINENT mathematician famous the world over for successfully turning the odds of roulette against the house has broken his decades-long silence about how he achieved the coup. 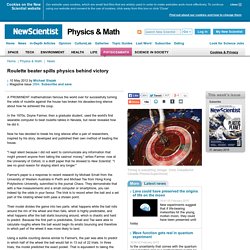 In the 1970s, Doyne Farmer, then a graduate student, used the world's first wearable computer to beat roulette tables in Nevada, but never revealed how he did it. Now he has decided to break his long silence after a pair of researchers, inspired by his story, developed and published their own method of beating the house.

"I kept silent because I did not want to communicate any information that might prevent anyone from taking the casinos' money," writes Farmer, now at the University of Oxford, in a draft paper that he showed to New Scientist. "I see no good reason for staying silent any longer. " Farmer's paper is a response to recent research by Michael Small from the University of Western Australia in Perth and Michael Tse from Hong Kong Polytechnic University, submitted to the journal Chaos. Promoted Stories. Lottery wins come easy, if you can spot the loopholes.

SOME lottery players don't wish for luck, they make their own. 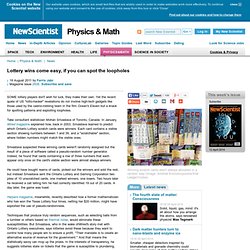 Yet the recent spate of US "lotto-hacker" revelations do not involve high-tech gadgets like those used by the casino-robbing team in the film Ocean's Eleven but a knack for spotting patterns and exploiting loopholes. Take consultant statistician Mohan Srivastava of Toronto, Canada. In January, Wired magazine explained how, back in 2003, Srivastava learned to predict which Ontario Lottery scratch cards were winners. Each card contains a visible section showing numbers between 1 and 39, and a "scratchable" section, where hidden numbers might match the visible ones. Advanced Poker Strategy. Basketball-reference glossary.

AST - Assists AST% - Assist Percentage (available since the 1964-65 season in the NBA); the formula is 100 * AST / (((MP / (Tm MP / 5)) * Tm FG) - FG). Assist percentage is an estimate of the percentage of teammate field goals a player assisted while he was on the floor. Award Share - The formula is (award points) / (maximum number of award points). For example, in the 2002-03 MVP voting Tim Duncan had 962 points out of a possible 1190. His MVP award share is 962 / 1190 = 0.81. Basketball-reference 4 factors. How do basketball teams win games? While searching for an answer to that question, Dean Oliver identified what he called the "Four Factors of Basketball Success": Shooting (40%)Turnovers (25%)Rebounding (20%)Free Throws (15%) The number in parentheses is the approximate weight Mr.