How Much Do Ads on YouTube Cost? Contributed by Jason Alleger YouTube is the second-largest search engine in the world, trailing only Google. 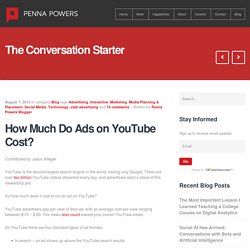 There are over two billion YouTube videos streamed every day, and advertisers want a piece of this viewership pie. So how much does it cost to run an ad on YouTube? YouTube advertisers pay per view of their ad, with an average cost-per-view ranging between $.10 – $.30. The views also count toward your overall YouTube views. On YouTube there are four standard types of ad formats: In-search – an ad shows up above the YouTube search results.In-slate – an ad shows up in the suggested videos after your video ended.In-display – an ad shows up on the suggested videos beside the video you are watching.In-stream – an ad plays before you can watch your video.

The pricing varies slightly per ad unit, with in-display ads ranging towards the higher end ($.30) and in-search toward the lower end ($.10). 8 Things You Should Know Before Building a Mobile App. Seth Porges is a magazine editor and the creator of Cloth, an iOS fashion app for iPhone and iPod Touch. 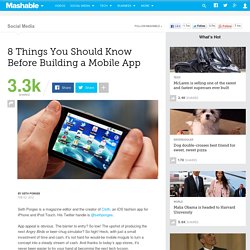 His Twitter handle is @sethporges. App appeal is obvious. How Much Does It Cost To Develop an App. Post updated March 25, 2015. 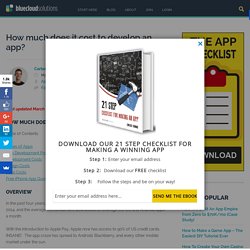 How much does it cost to develop an app? Table of Contents Types of AppsApp Development ProcessDevelopment CostsDesign CostsTotal CostsFree iPhone App Quote Overview In the past four years, the app market has exploded. With the introduction to Apple Pay, Apple now has access to 90% of US credit cards. And for good reason. On the highest end of the spectrum, you see Rovio, the makers of Angry Birds worth over a billion dollars off a simple game.

Then you also see people who put out basic free apps and still get thousands of downloads for doing nothing. The good news? Let’s talk about what goes into getting an app developed. Types of Apps You Can Develop. Tablet in hand PNG image. 7 Reasons You Should Listen To Music When You Work Out. Listening to music when you hit the gym to improve your workout isn’t exactly a new concept. 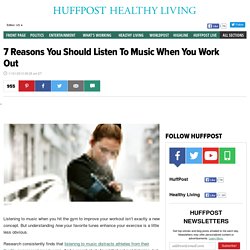 But understanding how your favorite tunes enhance your exercise is a little less obvious. Research consistently finds that listening to music distracts athletes from their “bodily awareness” (read: pain). And a recent study found that not just listening, but controlling and creating music in time to one’s pace had an even more profound effect on perceived effort during a workout. How many Fitbit devices have been sold in total? - Quora. Leading global social networks 2016. Internet users - Office for National Statistics. Wanna Know How Many Apple Pay Users There Are? Looking to expand beyond Mumbai and Pune, the eCommerce spiritual portal known as Where’s My Pandit will debut in seven cities across India during a festive and religious season that is ongoing. 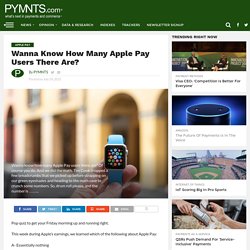 In an article on Thursday (July 23) from The Economic Times, Where’s My Pandit is noted as seeking to grow its presence in the Rs 40,000-crore puja and ritual market within the nation. “Having established and gauged the interest for sourcing Pandits to conduct puja and other rituals in our first year of operations, we have now tied-up our backend in cities like Delhi, Ahmedabad, Kolkatta, Bhopal, Indore, Bengaluru and Nagpur and will shortly extend our services in these new markets,” Arun Poddar, the portal’s founder, said in a statement. The company said that during its first year of operations it had conducted 500 pujas in and around Mumbai, with another puja in Pune through a continuing trial run. Survey says 38 percent of all Apple Pay transactions don’t happen in a store. According to a survey from market research group Phoenix Marketing International, 38 percent of all Apple Pay transaction volume comes from in-app purchases, with only 62 percent of purchases made in-store. 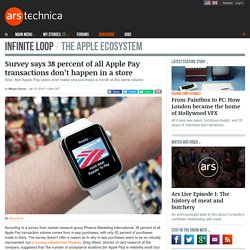 The survey doesn’t offer a reason as to why in-app purchases seem to be so robustly represented, but in a press release from Phoenix, Greg Weed, director of card research at the company, suggested that "the number of acceptance locations [for Apple Pay] is relatively small (but growing) and the incidence of reported friction at the point-of-sale is high.” That is, in-app purchases may look like a large part of Apple Pay's transaction volume because in-store purchases are still working to get off the ground. PayPal United Kingdom: Pay, Send Money & Accept Payments. Your browser does not meet new security standards for websites (like PayPal) that hold payment data, you’ll need to update it to continue accessing paypal.com after June 26th. 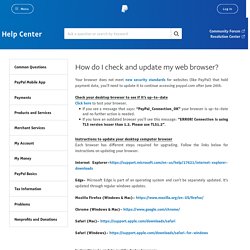 Check your desktop browser to see if it’s up-to-dateClick here to test your browser. If you see a message that says: “PayPal_Connection_OK” your browser is up-to-date and no further action is needed. If you have an outdated browser you’ll see this message: “ERROR! Connection is using TLS version lesser than 1.2. Please use TLS1.2”.Instructions to update your desktop computer browser Each browser has different steps required for upgrading. Internet Explorer- Edge- Microsoft Edge is part of an operating system and can’t be separately updated.

Mozilla Firefox (Windows & Mac)- Chrome (Windows & Mac)- Safari (Mac)- Safari (Windows)- Instructions to update mobile device browsers Follow the steps below to be sure you have the most up to date mobile browser. iOS Open the App Store app on mobile device. Intellectsoft - Custom Mobile App Development Company in USA. UK fitness and gym statistics 2014 from Kantar Media TGI Clickstream study. From tracking apps and monitoring bands to sweat resistant accessories and fitness watches, the relationship of tech and fitness has become intertwined. 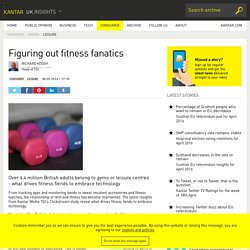 The latest insights from Kantar Media TGI's Clickstream study reveal what drives fitness fiends to embrace technology. Over 4.4 million British adults belong to gyms or leisure centres. And this group is nearly three times as likely as the average British adult to regularly jog - the target audience for most of the fitness tech market. Key Numbers. Health and Fitness Report 2015: Social Media. Gyms and health clubs can do so much more to engage with their audiences. 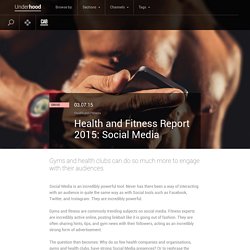 Social Media is an incredibly powerful tool. Never has there been a way of interacting with an audience in quite the same way as with Social tools such as Facebook, Twitter, and Instagram. They are incredibly powerful. By 2017, the App Market Will Be a $77 Billion Industry (Infographic) August 26, 2014 1 min read The market for mobile apps is already big -- and it’s just going to keep getting bigger. 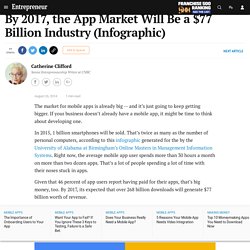 If your business doesn’t already have a mobile app, it might be time to think about developing one. In 2015, 1 billion smartphones will be sold. That’s twice as many as the number of personal computers, according to this infographic generated for the by the University of Alabama at Birmingham’s Online Masters in Management Information Systems. Right now, the average mobile app user spends more than 30 hours a month on more than two dozen apps.

Given that 46 percent of app users report having paid for their apps, that’s big money, too. Related: 5 Strategies to Get Your Users to Market Your Mobile App for You For information on the type of apps people are using and trends in future mobile apps, have a look at the infographic below. Click to Enlarge+ Save With Exclusive Bundles for Entrepreneur Customers. Online retail growth is “unstoppable” By 2030 online grocery shopping is tipped to account for 25% of the UK retail market, and 15-25% of the market across Europe as a whole. E-Commerce, Internet & Online Industry Market Research-Instant access to Statistics, Forecasts, Technologies, Services, Business Revenues, Mailing Lists. The global Internet audience continues to grow steadily, with the worldwide base of broadband Internet users (including fixed and wireless) in the 3.2 billion range as 2016 began.

This vast base of high speed Internet users encourages businesses to innovate in order to offer an ever-evolving array of online services. Sectors that are growing very rapidly online include the sale of entertainment products, event tickets, travel, apparel and consumer electronics. Strength in Numbers: The Importance of Fitness Buddies. Gina DeMillo Wagner · Workout partners can help you stay committed to fitness and have fun. Here’s what you need to know to form an active relationship that gets results. Record high of 31.42 million people in work. More people are in work than ever before, new official figures have revealed. Full-time work has driven an increase in the number of people in work, which now stands at 31.42 million – up nearly half a million from a year earlier.

The UK’s employment rate is 74.1%, the highest since comparable records began in 1971, and wages (before bonuses) have risen 2.2% compared with last year, while inflation was close to flat. Private sector employment, meanwhile, is the highest on record at 26.1 million. The UK is now a smartphone society. The reason we started Yew Clothing. 10 Reasons to Get a Workout Buddy (and What to Look For) - FitBodyHQ. Gym Buddy. What makes an app successful. What makes an app successful? The last four years has seen the mobile app market explode. UK Social Media Statistics for 2016. Social networks: global sites ranked by users 2015. About Fitbit. Uk.businessinsider. Office Space in: Hagley Road, Birmingham, B16. How does spending money on Facebook ads, Instagram ads, and Audience Network ads work?

The Ultimate iPhone App Marketing Strategy Guide. Updated: April 15, 2016 After a few app launches of our own, observing many more, talking with several app developers and testing cool services, we have a pretty really good idea of what can be done to make an app a success. How People Really Use Mobile. Apps World Blog. Forbes Welcome.