Where Is the Line Between Fashion and Art? Schiaparelli's famous shoe hat. 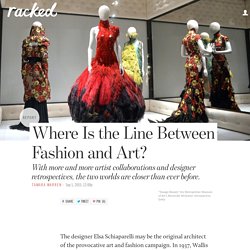 Image: Getty While the mingling of the art and fashion worlds is not a modern concept, the visibility of fashion and art crossover seems to be at an all high. The spectacle and sensation created by collaboration among creative forces inspires fashion houses to seek out contemporary artists for runway shows, capsule collections, or as commissioned filmmakers. Prada commissioned several murals for its spring 2014 runway show. The Gagosian Gallery represents the fashion photographers Inez & Vinoodh.

The artist Richard Phillips has a long history of brand collaborations with MAC, Jimmy Choo, Mont Blanc, and Cartier. Phillips' collection for MAC. Phillips is currently finalizing several new collaborations. While the fashion world is hungry for new campaigns, the art world is gradually growing more accepting of contemporary artists venturing into the larger culture. The Murakami/Louis Vuitton collaboration. "[Pruitt] has this fascination with fashion. Balmain Taps Power Sisters for Fall 2015 Campaign. Balmain's army has officially turned into a family affair. 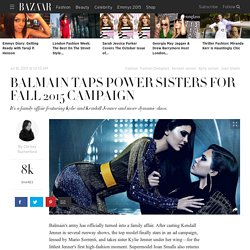 After casting Kendall Jenner in several runway shows, the top model finally stars in an ad campaign, lensed by Mario Sorrenti, and takes sister Kylie Jenner under her wing—for the littlest Jenner's first high-fashion moment. Supermodel Joan Smalls also returns as the face of the French brand, this time with her sister Erika Smalls—proving good genes run in the family. "They represent the fresh, diverse and open spirit of a new generation of fashion," said Balmain's Olivier Rousteing. The creative director aimed to celebrate the, "unique and unconditional love of siblings" with this casting, which also includes Gigi Hadid and Bella Hadid. Balmain Mario Sorrenti Advertisement - Continue Reading Below. Can Celebrities Dress for the Chinese-Themed Met Gala Without Being Culturally Insensitive? - Fashionista. On Monday, dozens upon dozens of celebrities and the designers who dress them will walk the red carpet into the Metropolitan Museum of Art to fete the opening of the Costume Institute's next exhibit, "China: Through the Looking Glass. 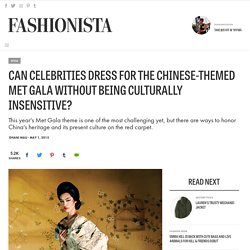 " The event — which this year counts Jennifer Lawrence, Jessica Chastain, Blake Lively, Anne Hathaway and Kim Kardashian among its hosts — is often referred to as “fashion’s biggest night," but many observers are wary to see how guests will interpret — or misinterpret — that theme. In a Jezebel article headlined “2015 Met Gala Will Probably Be an Asian-Themed Shitshow,” Kara Brown writes, “The fact that the core idea behind the theme is how Chinese aesthetics have influenced other designers is troubling because that influence is often culturally insensitive or downright racist. " She adds, “I simply do not trust the majority of Met Gala attendees to handle this theme with tact and respect. " In some ways, it's the former. As for what to avoid?

Forget fashion shops: how designers embraced art exhibitions. In October 2000 the Guggenheim Museum in New York opened a major retrospective of the work of Giorgio Armani. 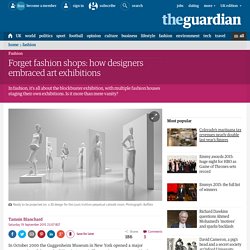 The previous year Armani had become a benefactor of the museum, with an amount rumoured to be $15m. The museum denied that the exhibition of about 400 Armani garments was a result of the designer’s generous “gift”, but the exhibition, which went on tour to the Guggenheim in Bilbao as well as the Royal Academy in London, sparked some cynicism. Fifteen years later, single-brand exhibitions have become commonplace. Alexander McQueen: Savage Beauty, which was created with the cooperation of the fashion house itself, in partnership with Swarovski and supported by American Express, was the V&A’s blockbuster hit this year, with more than 493,000 visitors. While there was collaboration with the brand, the show was rigorously curated (and any excess sponsorship money was sucked up by the elaborate staging). John Galliano Margiela Haute Couture 2015 Collection. There are few scandals as cartoonishly evil — or falls from grace as pitiful — as John Galliano's anti-semitic rant of 2011. 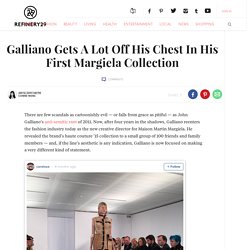 Now, after four years in the shadows, Galliano reenters the fashion industry today as the new creative director for Maison Martin Margiela. He revealed the brand's haute couture '15 collection to a small group of 100 friends and family members — and, if the line's aesthetic is any indication, Galliano is now focused on making a very different kind of statement. Given that Galliano has always sought out gratuitous flamboyance in his designs, the first Maison Martin Margiela look was surprisingly pared down: a reworked leather mini that evokes the hyper-clinical, deconstructed sensibilities of Margiela.

Raw and homespun, this is a primitive-meets-post-apocalyptic moment that seems appropriate, considering Galliano's personal Armageddon. This ensemble features quite a few Galliano hits: leopard print, red and more red, and a Madonna-esque approach to lace.