2011 MacBook Pro and Discrete Graphics. Okay, here's an another user with this sort of problem: yesterday evening, while I been browsing internet, my mid 2011 purchased macbook pro 8,2 has shown me a whole screen of blue tinted pattern noise, and froze completely after that. 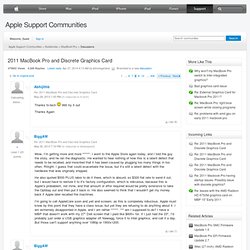 Restarting the laptop only lead to a white screen after apple logo disappeared, and than fans kicked in, and nothing happened after that. Mac os could boot only in safe mode, showing vertical blue stripe pattern overlay on screen, but at least it worked somehow, for period of 10 to 20 minutes, before blue graphic garbage filled screen again and everything froze. Following the guide from here - and disabling AMD card completely, after rebooting MBP I can finally access mac os in normal mode, sans for hardware accelerated features, color management and any screen tweaks (I can't even access brightness controls atm); there's a noticeable blueish tone to everything on screen, but I assume it's due to lack of proper color management coming from GPU. 2011 Macbook Pros are all beginning to fail 2-3 years later. Systemic issues with the GPU and logic board, requiring multiple logic board replacements. Apple help thread reaches thousands of replies and ~210,000 views. No response from Apple. : apple.

Apple remains mum as complaints mount over 2011 MacBook Pro GPU failures. By Mikey Campbell With an increasing number of early-2011 MacBook Pros suffering from what appears to be similar issues relating to built-in discrete AMD video cards, owners are now calling for a replacement program. 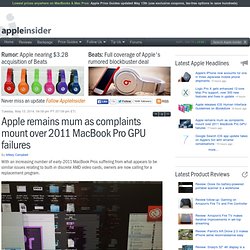 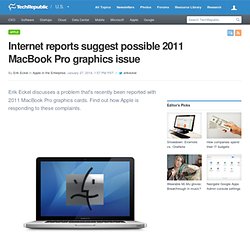 Find out how Apple is responding to these complaints. A long-running Mac complaint recently picked up quite a head of steam. Reddit posts, a Slashdot thread, and even items on Mac sites, such as MacRumors.com, explored the possibility a graphics card issue might exist with 2011-model MacBook Pros. At least one Apple Support Communities thread, begun by “abelliveau” on February 1, 2013, complains of a blue screen tint and horizontal distortion. Le problème de GPU des MacBook Pro 2011 prend de l'ampleur. Je vous fais par d'un post sur le forum d'Apple : I see a lot of people here are still asking if Apple will fix this issue free of charge. 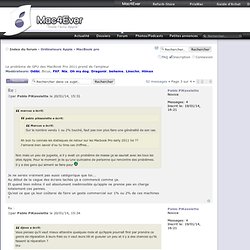 At this point, Apple doesn't recognize this issue, so we need everyone here to help bring it to their attention.Take your MacBook to apple for diagnostics testingThis could take up to a few days, so be preparedOnce you've gotten the test results back, if it is a logic board issue, call Apple and ask to speak to someone in Customer Relations.Go to this link for a list of support numbers --> the Customer Relations rep about your issue. If you give them the model number and the location you took it in, they will be able to look it up and confirm the problem. If enough Customer Relation reps hear about this, there's a chance Apple will finally recognize this issue. Cela dit en gros, qu'il faut faire constater la panne par un revendeur agréé ou par un apple store. Bien se munir du numéro du modèle incriminé ! Les MacBook Pro de 2011 souffriraient de ratés graphiques. Beaucoup de possesseurs de MacBook Pro de 2011 (15 et 17 pouces) se plaignent de bugs graphiques importants et aucune solution ne semble voir le jour. 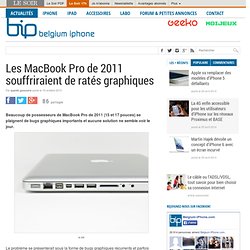 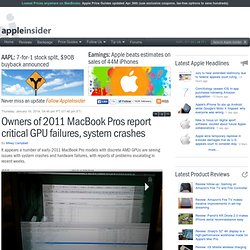 Screenshot of MacBook Pro graphics issue. | Source: Apple Support Communities forum member "abelliveau" According to a 157-page thread on the Apple Support Communities forum, an increasing number of owners of early- to late-2011 MacBook Pros with discrete graphics cards are seeing what is being reported as hardware-related system crashes. And the problem appears to be getting worse. Owners of 2011 MacBook Pros report critical GPU failures, system crashes. Paragon NTFS for MAC® OS X – Features. Problems with amd gpu on early 2011. I spent some time investigating this issue and I think the problem is hardware failure due production problems in the heating dissipation system. 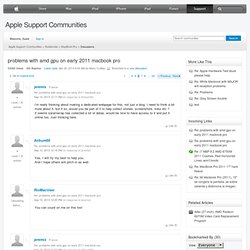 Not design problem but pure incompetance in manual assembly of the components PLUS a unstable GPU. I found some concerning pictures of the MBP 15 early '11 tear-down, where we can view things that are away beyond the lack of quality control, such as thermal paste spread like "butter over the bread" all over the processor's board, as well as losen ZIF connectors, etc...

In terms of design, GPU and CPU shares the same cooling pipe and the graphic switching processor has it's own, which is different from previous mid '10 MBP logicboard design. So, I think the GPU is overheating way faster than CPU and, when fan throtles in (controled by CPU temp) it's not enoght to keep GPU temperature threshold and cause GPU to fail. 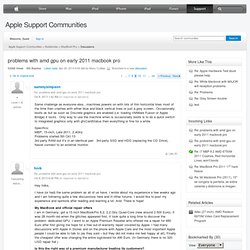 I wrote about my experience a few weeks ago and I am following quite a few discussions here and in other forums. I would like to post my experience and opinions after reading and learning a lot. And: There is hope! My MacBook and official repair offers I am in Germany, got a 15 inch MacBookPro 8,2, 2,2 Ghz Quad-Core (new around 2.500 Euro). Is this the right way of a premium manufacturer treating its customers? No. I also thought about changing and boycott Apple, but apart from this incident my overall experience with Macs is great, furthermore I have so many licences for Mac software and other infrastructure, libraries for photos and music… it would cost me much time and money to change – and MacBooks are the ******* best notebooks I have ever used.) What about the workarounds and software solutions?

Stop trying to find the failure with re-installing the system and changing things, it’s waste of time. Several MacBook Pro 2011 are presenting problems to the GPU and system crashes. SOIRS et WE-Etudiante Ecole de Commerce, 20 ans - Baby-sitting - PARIS. ▶ How to make a bootable Lion install disc or drive. [Editor's note: This article is part of our series of articles on installing and upgrading to Lion (OS X 10.7). 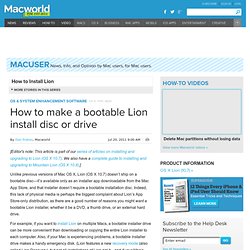 We also have a complete guide to installing and upgrading to Mountain Lion (OS X 10.8).] Unlike previous versions of Mac OS X, Lion (OS X 10.7) doesn’t ship on a bootable disc—it’s available only as an installer app downloadable from the Mac App Store, and that installer doesn’t require a bootable installation disc. Indeed, this lack of physical media is perhaps the biggest complaint about Lion’s App Store-only distribution, as there are a good number of reasons you might want a bootable Lion installer, whether it be a DVD, a thumb drive, or an external hard drive.