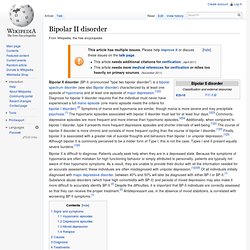 Patients usually seek help when they are in a depressed state. Because the symptoms of hypomania are often mistaken for high functioning behavior or simply attributed to personality, patients are typically not aware of their hypomanic symptoms. Signs and symptoms[edit] Hypomanic episodes[edit] Hypomania is characterized by euphoria and/or an irritable mood. GrandiosityDecreased need for sleepIncreased talkativenessRacing thoughtsDistractibilityOveractivity, especially in goal-directed areasPsychomotor agitationExcessive participation in risky behaviors, such as hypersexuality It is important to distinguish between hypomania and mania. 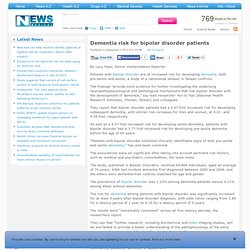 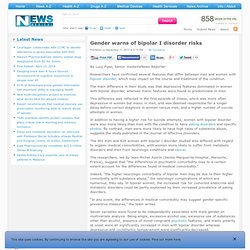 The main difference in their study was that depressive features dominated in women with bipolar disorder, whereas manic features were found to predominate in men. This difference was reflected in the first episode of illness, which was more often depressive in women but manic in men, and was deemed responsible for a longer delay before correct diagnosis in women versus men, and a higher number of suicide attempts in women. In addition to having a higher risk for suicide attempts, women with bipolar disorder were also more likely than men with the condition to have eating disorders and specific phobia. By contrast, men were more likely to have high rates of substance abuse, suggests the study published in the Journal of Affective Disorders. Is Bipolar Disorder Caused by Nature or Nurture? In recent years, there has been a startling rise in the diagnosis of bipolar disorder or manic depression. 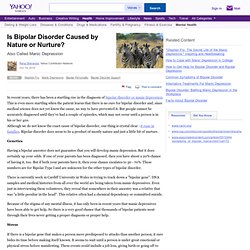 This is even more startling when the patient learns that there is no cure for bipolar disorder and, since medical science does not yet know the cause, no way to have prevented it. But people cannot be accurately diagnosed until they've had a couple of episodes, which may not occur until a person is in his or her 40s. Although we do not know the exact cause of bipolar disorder, one thing is crystal clear - it runs in families. Bipolar disorder does seem to be a product of mostly nature and just a little bit of nurture. Genetics Having a bipolar ancestor does not guarantee that you will develop manic depression.

There is currently work in Cardiff University in Wales in trying to track down a "bipolar gene". Because of the stigma of any mental illness, it has only been in recent years that manic depressives have been able to get help. Stress References: Lithium Has Even More Benefits Than Previously Thought. If psychiatry has a wonder drug, it might just be lithium. 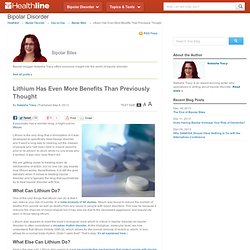 Lithium is the only drug that a formulation of it was developed to specifically treat bipolar disorder and it went a long way to clearing out the masses of people who had been held in insane asylums prior to its advent. In short, while no one knew why it worked, it was very clear that it did. We are getting closer to tracking down its mechanisms of action, but no one can say exactly how lithium works. Nevertheless, it is still the gold standard when it comes to treating bipolar disorder and is typically the drug that psychiatrists try to treat bipolar disorder with first. What Can Lithium Do?