Public Interface. The map trying to record every battle ever fought. Image copyright Nodegoat A Dutch company is attempting to map all the battles in history using Wikipedia. 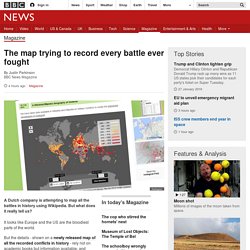 But what does it really tell us? What ISIS Really Wants. What is the Islamic State?

Where did it come from, and what are its intentions? The simplicity of these questions can be deceiving, and few Western leaders seem to know the answers. In December, The New York Times published confidential comments by Major General Michael K. А. Б. Зубов: «Крепостное состояние в Императорской России и его уроки сегодня» July is named for this man, and there's a good reason why. 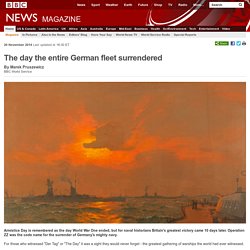 Operation ZZ was the code name for the surrender of Germany's mighty navy. For those who witnessed "Der Tag" or "The Day" it was a sight they would never forget - the greatest gathering of warships the world had ever witnessed. It was still dark in the Firth of Forth when the mighty dreadnoughts of the Royal Navy's Grand Fleet began to raise steam and one by one let slip their moorings. The huge shapes of more than 40 battleships and battlecruisers began to ease out, course set due east. Victory would be total.

The date was 21 November 1918. HMS Queen Elizabeth and other British battleships in line Crew of the HMS Barham, 5th Battle Squadron, watch for the surrendered ships "The Royal Navy perceived something that others did not. It was a sight those who saw it would never forget. Crimea crisis sharpens Latvia ethnic tensions. 26 March 2014Last updated at 10:31 ET By Damien McGuinness BBC News, Riga An annual memorial service commemorates nationalists who died defending Latvia against Soviet troops in WWII A mournful procession of about 1,500 Latvians winds its way through Riga's medieval Old Town singing traditional Latvian songs. 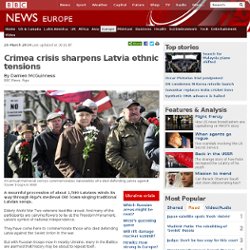 Greeks captivated by Alexander-era tomb at Amphipolis. 22 September 2014Last updated at 04:01 ET By Giorgos Christides Amphipolis, Greece Two sphinxes guard the entrance to the tomb at Amphipolis The discovery of an enormous tomb in northern Greece, dating to the time of Alexander the Great of Macedonia, has enthused Greeks, distracting them from a dire economic crisis. 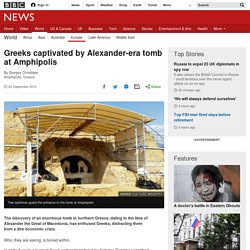 Who, they are asking, is buried within. In early August, a team of Greek archaeologists led by Katerina Peristeri unearthed what officials say is the largest burial site ever to be discovered in the country. The mound is in ancient Amphipolis, a major city of the Macedonian kingdom, 100km (62 miles) east of Thessaloniki, Greece's second city. The structure dates back to the late 4th Century BC and the wall surrounding it is 500m (1,600ft) in circumference, dwarfing the burial site of Alexander's father, Philip II, in Vergina, west of Thessaloniki. "This is a burial monument of unique dimensions and impressive artistic mastery. Ancient and modern guardians Amphipolis site. World History: The last 1000 Years. Why border lines drawn with a ruler in WW1 still rock the Middle East. 13 December 2013Last updated at 19:25 ET By Tarek Osman (@TarekmOsman) Presenter: The Making of the Modern Arab World The original secret Sykes-Picot map of 1916: "A" would go to France, "B" to Britain. 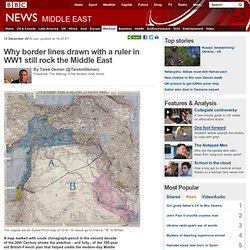 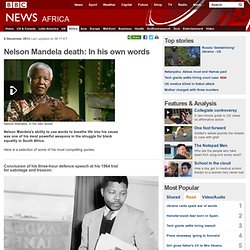 Here is a selection of some of his most compelling quotes. Conclusion of his three-hour defence speech at his 1964 trial for sabotage and treason: "I have fought against white domination, and I have fought against black domination. "But if needs be, it is an ideal for which I am prepared to die. " Letter from Robben Island, April 1971: "There are times when my heart almost stops beating, slowed down by heavy loads of longing. Who are Hezbollah? Image copyright AP Hezbollah - the Party of God - is a Shia Islamist political, military and social organisation that wields considerable power in Lebanon. 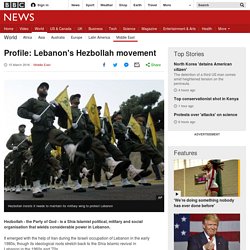 It emerged with the help of Iran during the Israeli occupation of Lebanon in the early 1980s, though its ideological roots stretch back to the Shia Islamic revival in Lebanon in the 1960s and '70s. After Israel withdrew in 2000, Hezbollah resisted pressure to disarm and continued to strengthen its military wing, the Islamic Resistance. In some ways, its capabilities now exceed those of the Lebanese army, its considerable firepower used against Israel in the 2006 war.

The group also gradually became a key power broker in Lebanon's political system, and has effectively gained veto power in the cabinet. Hezbollah has been accused of carrying out a string of bombings and plots against Jewish and Israeli targets and is designated a terrorist organisation by Western states, Israel, Gulf Arab countries and the Arab League. 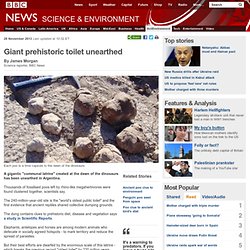