PGA-106-75+.pdf. Martin E. Meserve - K7MEM - VHF/UHF Yagi Antenna Design. Hoverman HDTV UHF antenna. The Hoverman antenna was invented in the 1950s by Doyt Hoverman before the advent of computer modeling, and appears to be a variation for UHF of the much earlier Chireix-Mesny shortwave antenna. 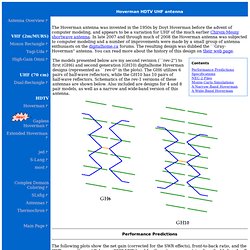 In late 2007 and through much of 2008 the Hoverman antenna was subjected to computer modeling and a number of improvements were made by a small group of antenna enthusiasts on the digitalhome.ca forums. The resulting design was dubbed the ``Gray-Hoverman'' antenna. You can read more about the history of this design on their web page. The following plots show the net gain (corrected for the SWR effects), front-to-back ratio, and the SWR across the post-February 2009 UHF band for the antenna geometries described below. In all these plots, the (rev-2) designs presented here are represented by the solid curves, while the dashed curves denote those of the original (rev-0) models described on the Gray-Hoverman web page and its forums. GH4 Parameters GH6 Parameters GH8 Parameters GH10 Parameters. 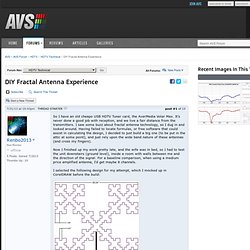 It's never done a good job with reception, and we live a fair distance from the transmitters. I saw some buzz about fractal antenna technology, so I dug in and looked around. Having failed to locate formulas, or free software that could assist in calculating the design, I decided to just build a big one (to be put in the attic at some point), and just rely upon the wide band nature of these antennas (and cross my fingers).

Now I finished up my work pretty late, and the wife was in bed, so I had to test the unit downstairs (ground level), inside a room with walls between me and the direction of the signal. For a baseline comparison, when using a medium price amplified antenna, I'd get maybe 8 channels. I selected the following design for my attempt, which I mocked up in CorelDRAW before the build: It's a big antenna. When I hooked it up for the first time, it was on the floor (ground level), and I didn't expect much. Design of The Gray-Hoverman Antenna - Digital Home Canada. TV Receive Antennas. Of all the columns I've written, the ones describing do-it-yourself antennas always bring the most response, sometimes years after the original column was written. 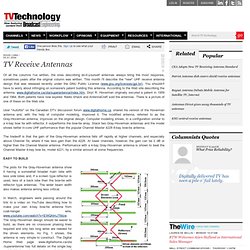 This month I'll describe the "new" UHF receive antenna design that was released recently under the GNU Public License (www.gnu.org/licenses/gpl.txt). You shouldn't have to worry about infringing on someone's patent building this antenna. According to the Web site describing the antenna, www.digitalhome.ca/ota/superantenna/index.htm, Doyt R. Hoverman originally secured a patent in 1959 and 1964. Both patents have now expired. User "Autofils" on the Canadian DTV discussion forum www.digitalhome.ca, shared his version of the Hoverman antenna and, with the help of computer modeling, improved it.

The tradeoff is that the gain of the Gray-Hoverman antenna falls off rapidly at higher channels, and especially above Channel 54, where it has less gain than the 4228. I'd appreciate hearing from readers who build this antenna.