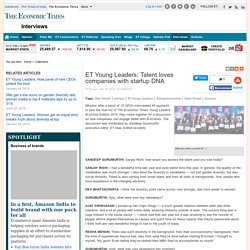 The discussion was moderated by Sandeep Gurumurthi, executive editor, ET Now. Edited excerpts. SANDEEP GURUMURTHI: Sanjay Rishi, how would you assess the talent pool you saw today? SANJAY RISHI: I had a wonderful time last year and even better time this year. DEV BHATTACHARYA: I think the diversity point came across very strongly, and more power to women! GURUMURTHI: Ajay, what were your key takeaways? AJAY SRINIVASAN: I picked up two major things — a much greater balance between work and other interests, and a lot of people with some really amazing interests outside of work.

GURUMURTHI: Amit, what was your experience this morning? VIVEK GAMBHIR: Clearly, this is a journey. Ajay Srinivasan - More money must be put into capex. I expect directional cues from the Budget rather than any thing big bang: Aditya Birla Financial Services CEO Bloomberg TV India caught up with Ajay Srinivasan, CEO of Aditya Birla Financial Services, to discuss market returns, corporate earnings and the government’s reform agenda. 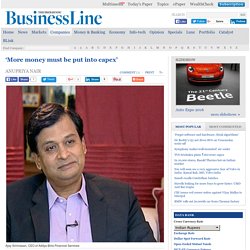 Excerpts: As we step into 2016, do you see much change from 2015, or will it be a slow trudge up? The big thing in 2015 is the way the global economy has panned out and I don’t see that changing very much in 2016. I think 2015 has shown there is a fair amount of fragility and we are more likely to look at downside now in terms of global growth compared to upside.

The US looks like one possible oasis of growth both in the developed world. We want to give the customer a big range of services: Ajay Srinivasan. ET Bureau Jul 29, 2015, 06.08AM IST (Aditya Birla Financial…) Aditya Birla Financial Services, part of the $40-billion Aditya Birla Group, has diversified its portfolio into 10 lines of businesses as it seeks to offer products to cater through the life of an individual, "from cradle to grave". 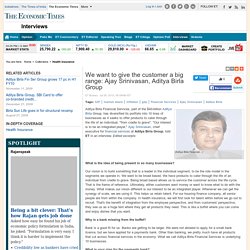 "Our interest is to be an integrated player," Ajay Srinivasan, chief executive for financial services at Aditya Birla Group, told ET in an interview. Edited excerpts: What is the idea of being present in so many businesses? Our vision is to build something that is a leader in the individual segment, to be the role model in the segments we operate in. Why is a bank missing from the buffet? Bank is a good fit for us. What is your plan for the payments bank? It is largely a remittance kind of business, which we are not doing right now. What are the prospects of the life insurance business in India? After a few years of challenge, the private sector had a chequered growth. Inflation is under control. Ajay Srinivasan - Outlook on Union Budget 2015. The finance minister has presented a realistic budget which is pro-growth and focuses on several sections of the economy and country. 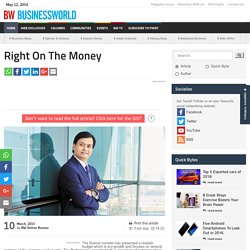 The Budget was presented with a clear tone of optimism about the Indian economy, setting out the key focus areas of this government — health, housing, skilling, education, agricultural productivity, connectivity and manufacturing. Eschewing the demand for fiscal consolidation, a fiscal stimulus to kick-start the economy has been provided. This has been done by increasing expenditure, primarily on infrastructure. Capital expenditure has been increased by 25 per cent, which itself is handsome, but the real increase in spend for capital purposes could be higher. Innovative means have been devised to fund the infra sector, including an infrastructure fund that has been allocated Rs 20,000 crore. 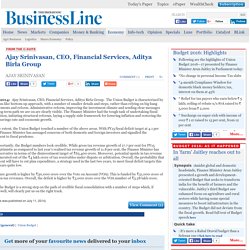 The Union Budget is characterised by a workman-like bottom-up approach, with a number of smaller details and steps, rather than relying on big bang announcements and reform. Administrative reform, improving the investment climate and sending clear messages on the long-term path we are on are clearly visible. The Finance Minister had the tough task of undertaking fiscal consolidation, initiating structural reforms, laying a supply-side framework for lowering inflation and restoring the financial savings rate and economic growth. To a large extent, the Union Budget touched a number of the above areas.