Ajan Reginald (@AjanReginald) A Cure for the Broken Heart?: An Interview with Ajan Reginald. As start-up ideas go, this has to be one of the best: Ajan Reginald wants to mend broken hearts. 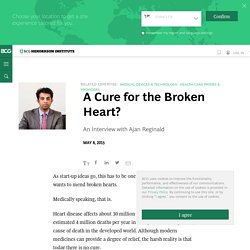 Medically speaking, that is. Heart disease affects about 30 million people globally, causes an estimated 4 million deaths per year in Europe, and is the primary cause of death in the developed world. Although modern medicines can provide a degree of relief, the harsh reality is that today there is no cure. But there may be. Ajan (Chicago, Zurich, 2003-2005) is the founder and CEO of Cell Therapy Limited (CTL), a biotech firm he started in 2009 to experiment with stem cells as a way to fix damaged heart tissue.

“It was my dream to start a company that melds great science with great business to produce great benefits,” said Ajan. It doesn’t hurt that his cofounder is Professor Sir Martin Evans, a Nobel laureate who first isolated and grew embryonic stem cells at Cambridge University back in the 1980s. For the first six months, it was only the two of them. It took just ten days. Ajan Reginald (@AjanReginald) Hematopoietic Stem Cells: What Are They and What is Their Function? – Ajan Reginald. Most of us understand the importance of blood cells. 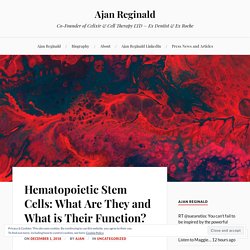 Red blood cells carry oxygen throughout the body while white blood cells fight infection and help us develop immunity to diseases. But, what about the stem cells that turn into our blood cells? Scientists, researchers, and doctors have been studying hematopoietic stem cells (HSCs) – the stem cells that form blood and immune cells – for over 60 years, starting after the bombings of Hiroshima and Nagasaki in 1945. They’re now routinely used to treat patients with cancer after chemotherapy. What Is A Hematopoietic Stem Cell? The hematopoietic system – the system responsible for the production of the bodies’ cellular components – relies on the presence of HSCs. In fact, HSCs are the only source for the continued production of red blood cells, platelets, white blood cells, and all other cells in the system. 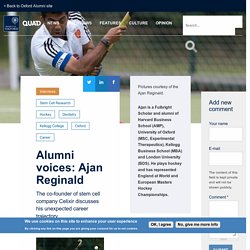 The company and its research stands, in 2019, at a very exciting juncture, yet his career is remarkable for the manner in which he turned around a dismal situation that could easily have unseated someone less determined. A brilliant hockey player, Ajan trialled for England as a teenager and was playing at the highest level for top London club Southgate. ‘Hockey was really important for me,’ he recalls – it was the dominant part of his life in the 1990s.

Age 16, he thought nothing of a stray ball hit to his left eye, but then it happened again a few years down the road. ‘It was a short corner. In another career this might not have mattered, but Ajan chose dentistry like many immediate family members around him. So here he was, with both his identities, hockey and dentistry, lying in pieces on the floor like a smashed vase. Advanced Therapies. Ajan Reginald is a co-founder and the Chief Executive Officer of Celixir, which he originally founded under the name Cell Therapy Ltd in 2009 with Nobel Laureate Professor Sir Martin Evans. Celixir is a British biotechnology company that discovers and develops life-saving and life-altering regenerative medicines for patients with the greatest medical need. Celixir’s unique, world-class technology platform drives in-house discovery and has created a pipeline of 20 tissue-specific regenerative medicines, an unprecedented feat in the field of regenerative medicine.

Celixir’s pipeline is led by their investigational cardiac regenerative medicine, HeartcelTM which is designed to treat patients with ischaemic heart disease undergoing coronary artery bypass graft. Functioning Kidney Tissue Produced from Stem Cells – Ajan Reginald. For the first time in the history of medical science, scientists from the University of Manchester have been able to produce functioning human kidney tissue inside a living organism. 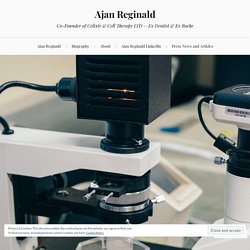 For the medical community and for ailing patients, this means more effective treatments for kidney disease. The study, which was published in the journal Stem Cell Reports, was led by Professors and researchers Sue Kimber and Adrian Wolf. The team were able to grow kidney glomeruli from embryonic stem cells in a laboratory. Kidney glomeruli serve an important function in the filtration of blood and subsequent production of urine. Could Stem Cell Therapy Help With Autism? – Ajan Reginald. Back in April of 2017, 25 autistic children participated in a study at Duke University in North Carolina. 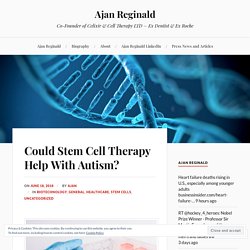 The study – the first of its kind – aimed to treat the children’s’ autism by transfusing the blood from their own umbilical cord. This blood contained rare stem cells and, after the transfusions, two-thirds of the participants showed improvements in their symptoms. How Regenerative Medicine is Helping Treat Cardiovascular Disease – Ajan Reginald. The Impact of Cardiovascular Disease Cardiovascular disease (CVD) – in all of its forms – is the number one killer in the UK, Europe and the US. 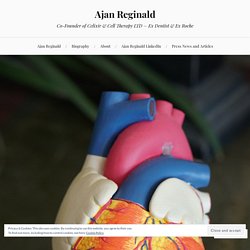 More often than not, it has long-term effects, including an enlarged, damaged and less efficient heart muscle which naturally leads to other disabilities and a notably decreased quality of life. While the affected person certainly bears the burden of such diseases, society as a whole does as well. In a 2006 study, researchers found that CVD cost the UK economy £29.1 billion in 2004, with healthcare costs accounting for 60% of the total.

This number is even higher in the US, with healthcare costs associated with CVD just under $300 billion per year. Current Methods for Treating Cardiovascular Disease It’s worth mentioning that CVD encompasses all diseases and conditions that affect the heart or blood vessels. Coronary Heart Disease What About Prevention? Currently, prevention of CVD is directed at lifestyle changes. Like this: Like Loading... Stem Cells Capable of Regenerating Lung Tissue – Ajan Reginald. Over the last several months, studies and trials from around the world have found new and groundbreaking ways to repair lung functions in both humans and mice. 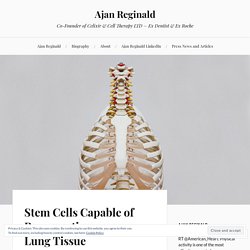 In the latest study, researchers from the Perelman School of Medicine at the University of Pennsylvania report identifying a lung stem cell that repairs the organ’s gas exchange compartment. The findings will be essential in repairing slow to regenerate lung tissue that has been damaged by respiratory ailments like severe influenza, pneumonia, cystic fibrosis and bronchitis to name a few. The European Respiratory Society reports that an estimated one billion people are currently suffering from chronic respiratory conditions. The team – led by Edward E. How Regenerative Medicine is Helping Treat Cardiovascular Disease – Ajan Reginald. Advanced Therapies. Ajan Reginald – Co-Founder of Celixir & Cell Therapy LTD – Ex Dentist & Ex Roche. The Potential Impact of AI on Cell Therapy – Ajan Reginald.

Just under two years ago, Ajan Reginald, the founder, CEO and thought leader behind Celixir, sat down with IntelligentHQ.com to talk about current challenges and opportunities within the healthcare industry. 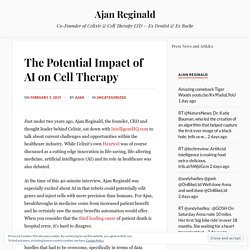 While Celixir’s own Heartcel was of course discussed as a cutting edge innovation in life-saving, life-altering medicine, artificial intelligence (AI) and its role in healthcare was also debated. At the time of this 40-minute interview, Ajan Reginald was especially excited about AI in that robots could potentially edit genes and inject cells with more precision than humans. For Ajan, breakthroughs in medicine come from increased patient benefit and he certainly saw the many benefits automation would offer. When you consider that the third leading cause of patient death is hospital error, it’s hard to disagree. But, despite the obvious benefits, there were still a number of hurdles that had to be overcome, specifically in terms of data privacy and encryption.

Oxford Alumni / Alumni voices: Ajan Reginald. How to Pursue a Career in Regenerative Medicine – Ajan Reginald. If you were to take a look at the educational and professional backgrounds of those apart of Celixir’s leadership – including its founders, board of directors and scientific advisory committee – you might be surprised by the variety you’d find. 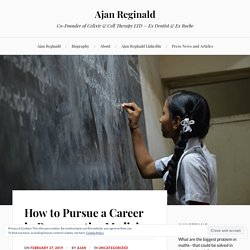 Professor Sir Martin Evans, Celixir’s President, Chief Scientific Officer and co-founder, attended Christ’s College (a constituent college of the University of Cambridge) where he studied zoology, botany, chemistry and biochemistry. After graduating with a BA, he moved to University College London where he worked as a research assistant and graduated with a PhD. Not only did Sir Martin Evans isolate the first embryonic stem cells, he’s also published over 120 scientific papers and is the recipient of a Nobel Prize. Advanced Therapies. LinkedIn. Ajan Reginald Twitter For Stem Cell Research Updates. Ajan Reginald – Co-Founder of Celixir & Cell Therapy LTD – Ex Dentist & Ex Roche.

Who is Ajan Reginald? - Celixir. Ajan Reginald founded Celixir with Professor Sir Martin Evans in 2009 and has served as the company’s Chief Executive Officer since inception. 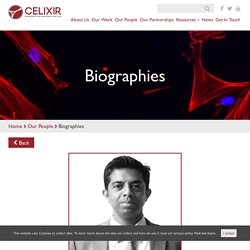