A lazybone, an eagle-eye, circling a city that's higher than the sky. 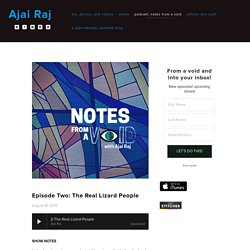 I have to say that before the lizard-loving PC brigade sends its scaly stormtroopers to my mammalian den. In this episode of Notes From A Void, I ramble about the evolution of our triune human brains, inspired by this astounding book: A General Theory Of Love by Thomas Lewis, Fari Amini, and Richard Lannon. Excited to have Emil DeRosa on the show next week, talking about adventures in depression and therapy, and also about lizard brains and the "do's" and "don'ts" of suicide.

15 Terrifying Things That Will Make You A Better Writer. Ready to do some things for your craft that will terrify you even more than a sewer-dwelling clown? 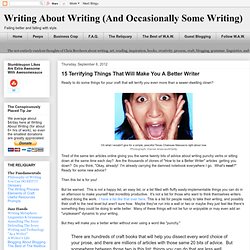 Tired of the same ten articles online giving you the same twenty bits of advice about writing punchy verbs or sitting down at the same time each day? Are the thousands of clones of "How to be a Better Writer" articles getting you down? Do you think, "Okay, already! I'm already carrying the damned notebook everywhere I go. What's next? "

Maps and data and stuff. Open Culture. Audio. Gamification. Exoplanets. Gender politics. History. Food for thought. 10-year-long video game creates 'hellish nightmare' world. In this 10-year-old 'Civilization' game, most of the world is ravaged by war and flooding after the ice caps melted. 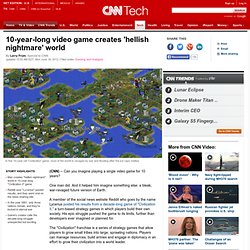 Man creates "hellish nightmare" world in 10-year-long "Civilization II" gameReddit user "Lycerius" posted results, and they went viral on the news-sharing siteIn the year 3991, only three nations remain, and they're locked in eternal warGame's creator calls the decade-long struggle unexpected but exciting (CNN) -- Can you imagine playing a single video game for 10 years? One man did. And it helped him imagine something else: a bleak, war-ravaged future version of Earth. These Models Are Making People Get Their Checkbooks Out. “When It’s Not Your Turn”: The Quintessentially Victorian Vision of Ogden’s “The Wire” There are few works of greater scope or structural genius than the series of fiction pieces by Horatio Bucklesby Ogden, collectively known as The Wire; yet for the most part, this Victorian masterpiece has been forgotten and ignored by scholars and popular culture alike. 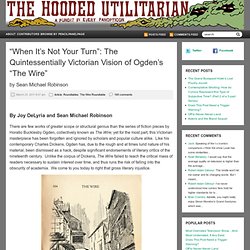 Like his contemporary Charles Dickens, Ogden has, due to the rough and at times lurid nature of his material, been dismissed as a hack, despite significant endorsements of literary critics of the nineteenth century. Unlike the corpus of Dickens, The Wire failed to reach the critical mass of readers necessary to sustain interest over time, and thus runs the risk of falling into the obscurity of academia. We come to you today to right that gross literary injustice. The Wire began syndication in 1846, and was published in 60 installments over the course of six years. Each installment was 30 pages, featuring covers and illustrations by Baxter “Bubz” Black, and selling for one shilling each. The Wire charted another course. New Zealand night parrot back from the brink. A one-year-old Kakapo (Strigops habroptila) on Codfish Island, New Zealand. 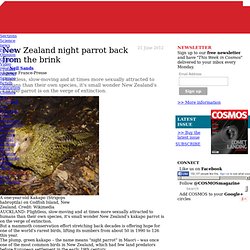 Credit: Wikimedia AUCKLAND: Flightless, slow-moving and at times more sexually attracted to humans than their own species, it’s small wonder New Zealand’s kakapo parrot is on the verge of extinction. But a mammoth conservation effort stretching back decades is offering hope for one of the world’s rarest birds, lifting its numbers from about 50 in 1990 to 126 this year. The plump, green kakapo – the name means “night parrot” in Maori – was once one of the most common birds in New Zealand, which had few land predators before European settlement in the early 19th century.

Fiction. Insane art formed by carving books with surgical tools - Karan Arora’s Posterous. Language. Learning Spanish with Free Audio Lessons: The Lay of the Land. Learning Spanish today is as easy as sitting in front of your computer and downloading online audio to your MP3 player. If you’re motivated, you can learn a great deal of Spanish at little to no cost without ever leaving the comfort of home. A tremendous range of instructional Spanish language podcasts, from the beginner level to advanced, are widely available on the internet and many of them are free. (Some charge for accompanying transcripts and written practice exercises.) So whether you are a raw beginner or a seasoned language study veteran, there is a podcast out there to suit you. Here are the details on a handful of educational Spanish language podcasts that are worth a closer look: ( iTunes – Feed – Web Site ), whose slogan is “language learning with your latte,” is undoubtedly king of the instructional podcast hill, with a large and loyal fanbase.