The Politics of Playgrounds, a History. Unless you're a frequent reader of parenting blogs, you might not know there's a major divide in the world of children's playgrounds. 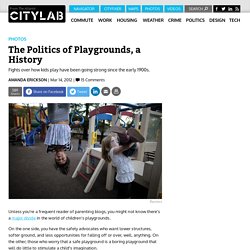 On the one side, you have the safety advocates who want lower structures, softer ground, and less opportunities for falling off or over, well, anything. Schemas in Children’s Play - N a t u r e P l a y. Written by Clare CaroSchemas in Children’s Play are such an important concept when it comes to the development of our children that it’s worth taking the time to understand them so you can facilitate them when you see them.What are these schemas?

Well it’s really a fancy word for the urges that children have to do things like climb, throw things and hide in small places. They appear through play; perhaps it is the way they choose to do things, or what they desperately need to do out of the blue! Bringing It All TogetherAfter looking at each schema individually to get to grips with what each 'urge' is all about we may already be able to recognise some of the different ways they can appear in your child.Rotation, Trajectory, Enveloping, Orientation, Positioning, Connection, Enclosure/Container, Transporting and Transformation are urges that show in all children starting as early as their first birthday, some times before.How Can Knowing About These Urges Help Us? 5 ways to let a little more risk into your child’s day (and why that’s a good thing) By Lauren Knight January 16 Milo on the swings. 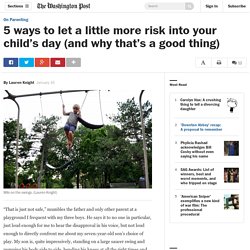 (Lauren Knight) “That is just not safe,” mumbles the father and only other parent at a playground I frequent with my three boys. He says it to no one in particular, just loud enough for me to hear the disapproval in his voice, but not loud enough to directly confront me about my seven-year-old son’s choice of play. My son is, quite impressively, standing on a large saucer swing and pumping his body side to side, bending his knees at all the right times and leaning into the motion to perfect the highest possible movement on the structure. Emil climbing. I smile politely and make eye contact, assuring the stressed man that I am aware of my son’s actions and moreover, I approve.

Tim Gill: Bred in captivity. Every year since 1979 there has been a Big Garden Bird Watch, a nationwide survey organised by the RSPB. 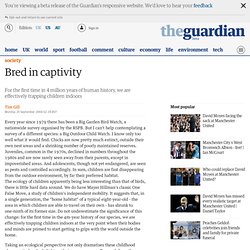 But I can't help contemplating a survey of a different species: a Big Outdoor Child Watch. I know only too well what it would find. Chicks are now pretty much extinct, outside their own nest areas and a shrinking number of poorly maintained reserves. Juveniles, common in the 1970s, declined in numbers throughout the 1980s and are now rarely seen away from their parents, except in impoverished areas. And adolescents, though not yet endangered, are seen as pests and controlled accordingly. The ecology of children apparently being less interesting than that of birds, there is little hard data around. Taking an ecological perspective not only dramatises these childhood changes, it also sheds light on their consequences. Sceptics may ask about the relevance of animal findings to our own species. The decline is, in part, a side effect of wider social changes. The outdoor child: doomed to extinction? Every year since 1979 there has been a Big Garden Bird Watch, a UK-wide survey organised by the Royal Society for the Protection of Birds. 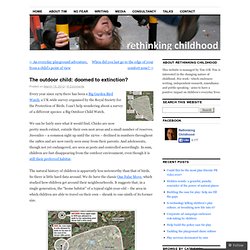 I can’t help wondering about a survey of a different species: a Big Outdoor Child Watch. We can be fairly sure what it would find. Chicks are now pretty much extinct, outside their own nest areas and a small number of reserves. Juveniles – a common sight up until the 1970s – declined in numbers throughout the 1980s and are now rarely seen away from their parents. And adolescents, though not yet endangered, are seen as pests and controlled accordingly. The natural history of children is apparently less noteworthy than that of birds. The shrinking horizons of childhood Do not underestimate the significance of this change. Taking an ecological perspective dramatizes these childhood changes. K%20Martin%202011%20Electronic%20Overload%20DSR%20(2) Doc-534-climbing-trees-research-report-2011-06-22-final. Wells%20Nature%20and%20the%20Life%20Course. Can a Playground Be Too Safe?

“I grew up on the monkey bars in Fort Tryon Park, and I never forgot how good it felt to get to the top of them,” Mr. 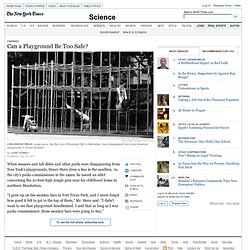 Ben delaney - On Kids and How to Help Them Grow. This morning a friend sent me an article on kids in Switzerland and how they are treated so much differently than their American counterparts. 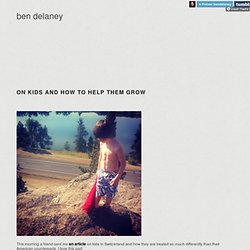 I love this part: Saws. The kind you buy at the hardware store to cut wood. Risk and Reward in Nature Play. By Ken Finch, Green Hearts “Risk averse” barely seems to do justice to the expansive fears of our modern American society. 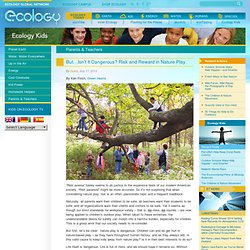 “Risk paranoid” might be more accurate. So it’s not surprising that when considering nature play, risk is an often- passionate topic and a frequent roadblock. Naturally, all parents want their children to be safe; all teachers want their students to be safe; and all organizations want their clients and visitors to be safe. Yet it seems as though our strict standards for workplace safety – that is, no risks, no injuries – are now being applied to children’s outdoor play.