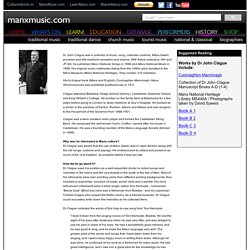 With fellow collectors, WH and JF Gill, he published Manx National Songs in 1896 and Manx National Music in 1898. His original music notebooks dating from the 1890s were donated to the Manx Museum (Manx National Heritage). They contain 315 melodies. Monday Musicians tunes. This list has 1566 tunes on 468 sheets (although 93 tunes are hidden and 3 sheets are missing). 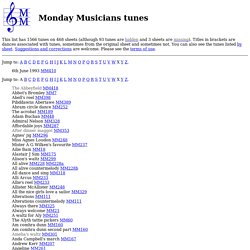 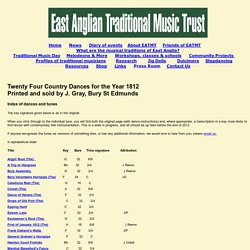 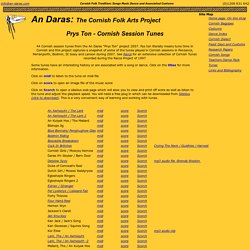 Paperback with 17 black and white photographs. A history of dancce in Cornwall from the earliest referenes in Cornish literature to the dances of the folk revival. Collected by members of teh Davey family, noted musicians. 45 dances are clearly transcribed - social dances, broom dances, snail creep,guise and furry dances - accompanied by tunes traditional and modern, for use in schools, festivals, workshops an country dances. Manx Music ABC. Much of the Manx traditional music repetoire is now accessible in printed form on the island. 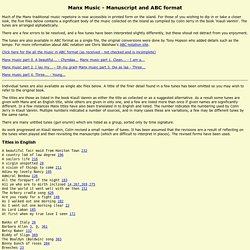 For those of you wishing to dip in or take a closer look, the five files below contains a significant body of the music collected on the island as compiled by Colin Jerry in the book 'Kiaull Vannin'. The tunes are arranged alphabetically. There are a few errors to be resolved, and a few tunes have been interpreted slightly differently, but these shoud not detract from you enjoyment. The tunes are also available in ABC format as a single file, the original conversions were done by Tony Hopson who added details such as the tempo. 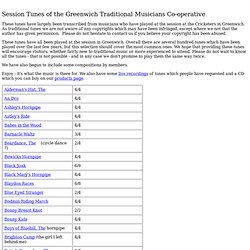 As traditional tunes we are not aware of any copyrights which may have been infringed, except where we not that the author has given permission. Please do not hesitate to contact us if you believe your copyright has been abused. These tunes have all been played at thesession in Greenwich. Overall there are several hundred tunes which have been played over the last few years, but this selection should cover the most common ones. We have also begun to include some compositions by members. Enjoy - it's what the music is there for. Findlay Splash. The History of Music and Dance in Australia 1788-1840. © Heather Clarke. Cecil Sharp English country dance and Morris tunes. This page is devoted to Cecil Sharp's original piano arrangements of English country dance and Morris tunes from Playford's The English Dancing Master. 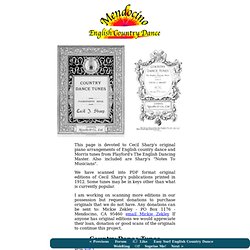 Also included are Sharp's "Notes To Musicians". We have scanned into PDF format original editions of Cecil Sharp's publications printed in 1912. Some tunes may be in keys other than what is currently popular. Musical, Poetical, and Historical Relicks of The Welsh Bards and Druids ... - Edward Jones. Vaughan Williams Memorial Library - The Full English archive collections. Vaughan Williams Memorial Library - Home. Song Origins & Info. Browse the Gallery of Historic Dance and Tune Books. List of historical tunebooks, some of which are available on the internet - Folkopedia. From Folkopedia Within Britain and Ireland cultural boundaries have never been the same thing as our present 'national' borders. 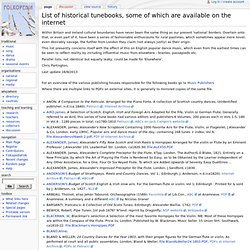 Overlain onto that, or even part of it, have been a series of fashionable enthusiasms for rural pastimes, which sometimes appear more novel, even desirably savage, the further from London they claim (not always justly) as their origin. This list presently concerns itself with the effect of this on English popular dance music, which even from the earliest times can be seen to reflect reality by including influential music from elsewhere - branles, passepieds etc. 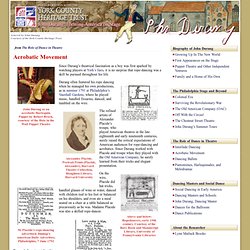 Puppet by Robert Brock, courtesy of the Hole in the Wall Puppet Theatre Since Durang’s theatrical fascination as a boy was first sparked by watching players at York’s fairs, it is no surprise that rope-dancing was a skill he pursued throughout his life. Durang often featured his rope dancing when he managed his own productions, as in summer 1791 at Philadelphia’s Vauxhall Gardens, where he played music, handled firearms, danced, and tumbled on the wire.