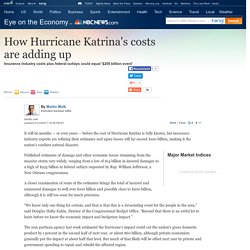 Loading stock quotes… Major Market Indices Published estimates of damage and other economic losses stemming from the massive storm vary widely, ranging from a low of $14 billion in insured damages to a high of $225 billion in federal outlays requested by Rep. William Jefferson, a New Orleans congressman. A closer examination of some of the estimates brings the total of insured and uninsured damages to well over $100 billion and possibly close to $200 billion, although it is still too soon for much precision. “We know only one thing for certain, and that is that this is a devastating event for the people in the area,” said Douglas Holtz-Eakin, director of the Congressional Budget Office.

But the final cost for federal taxpayers far less certain. Katrina Cost May Exceed 4 Years of War. WASHINGTON — One storm could end up costing almost as much as two wars. 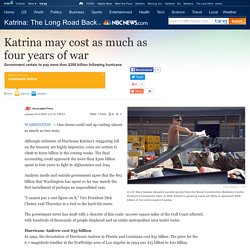 Although estimates of Hurricane Katrina's staggering toll on the treasury are highly imprecise, costs are certain to climb to $200 billion in the coming weeks. The final accounting could approach the more than $300 billion spent in four years to fight in Afghanistan and Iraq. Analysts inside and outside government agree that the $62 billion that Washington has spent so far was merely the first installment of perhaps an unparalleled sum. "I cannot put a cost figure on it," Vice President Dick Cheney said Thursday in a visit to the hard-hit states. The government never has dealt with a disaster of this scale: 90,000 square miles of the Gulf Coast affected, with hundreds of thousands of people displaced and an entire metropolitan area under water.

1.1 a Geofile Katrina Aftermath. Katrina's Economic Impact: One Year Later. The Workforce and Economic Recovery: Effects of Hurricane Katrina. The estimated $100 billion in damages from Hurricane Katrina in August 2005 is just one gauge of the hurricane's economic effect. 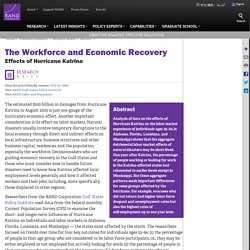 Another important consideration is its effect on labor markets. Natural disasters usually involve temporary disruptions to the local economy through direct and indirect effects on local infrastructure, business structures and other business capital, residences, and the population, especially the workforce. Decisionmakers who are guiding economic recovery in the Gulf States and those who must consider how to handle future disasters need to know how Katrina affected local employment levels generally and how it affected workers and their jobs, including, more specifically, those displaced to other regions. Katrina's effect on markets and the economy - Sep. 2, 2005. NEW YORK (CNN/Money) - As evacuation efforts continue in New Orleans and surrounding areas, Wall Street is looking at how Hurricane Katrina will affect business, the markets and the economy. 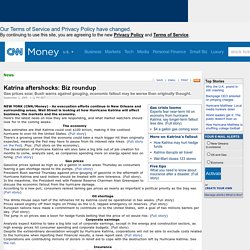 Here's the latest news on how they are responding, and what market watchers should look for in the coming weeks. The economy New estimates are that Katrina could cost $100 billion, making it the costliest hurricane to ever hit the United States. (Full story) There's a growing sense that the economy could take a much bigger hit than originally expected, meaning the Fed may have to pause from its interest rate hikes.

The devastation of Hurricane Katrina will also take a big bite out of job creation for months to come, analysts said, as companies spending more on energy spend less on hiring. Gas prices Gasoline prices spiked as high as $5 a gallon in some areas Thursday as consumers fearing a gas shortage raced to the pumps. Oil shortage Corporate earnings Insurance Airlines. Katrina damage estimate hits $125B. Katrina damage estimate hits $125B NEW YORK (AP) — Hurricane Katrina caused at least $125 billion in economic damage and could cost the insurance industry up to $60 billion in claims, a leading risk assessment firm said in updated estimates Friday. 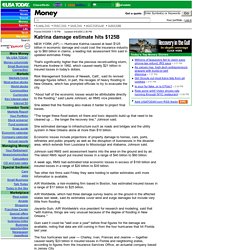 That's significantly higher than the previous record-setting storm, Hurricane Andrew in 1992, which caused nearly $21 billion in insured losses in today's dollars. Risk Management Solutions of Newark, Calif., said its revised damage figures reflect, in part, the ravages of heavy flooding in New Orleans, which has prompted officials to try to evacuate the city. "About half of the economic losses would be attributable directly to the flooding," said Laurie Johnson, an RMS vice president. She added that the flooding also makes it harder to project final losses.

"The longer these flood waters sit there and toxic deposits build up that need to be cleaned up ... the longer the recovery line," Johnson said. Louisiana Insurance Commissioner J. 53572. Katrina's Economic Impact. The storm that ruptured the roof of the Louisiana Superdome is also putting a dent in the nation's economy. 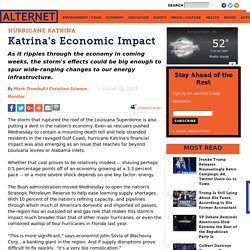 Even as rescuers pushed Wednesday to contain a mounting death toll and help stranded residents in the ravaged Gulf Coast, hurricane Katrina's financial impact was also emerging as an issue that reaches far beyond Louisiana levees or Alabama inlets. Whether that cost proves to be relatively modest -- shaving perhaps 0.5 percentage points off of an economy growing at a 3.3 percent pace -- or a more severe shock depends on one key factor: energy. The Bush administration moved Wednesday to open the nation's Strategic Petroleum Reserve to help ease looming supply shortages. "This is more significant," says economist John Silvia of Wachovia Corp., a banking giant in the region. And if supply disruptions prove difficult to fix quickly, "it's a very big complication. " Before the announcement, prices had surged above $70 a barrel.