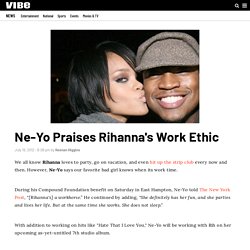 Cowell was thrown out of court at one point during the trial. On Thursday (Feb. 6), a former Bay Area Rapid Transit Officer Andres Rocha testified about trying to save Wilson’s life after she was stabbed on a train platform at Oakland’s MacArthur BART station. “I attempted to keep her heart beating,” Rocha recalled according to Fox affiliate KTVU. Rocha was outside the BART station assisting in another medical issues when commuters came running out of the station screaming that someone had a knife. Cowell was one of the people who ran past Rocha while pointing him in the direction of the train platform.

“Evil exists in this world,” Alameda County Deputy District Attorney Butch Ford said during opening statements on Wednesday (Feb. 5). Last year, a judge ruled that Cowell was mentally competent to stand trial. Photos - Rihanna. Rihanna's Vogue Cover: The Singer Talks Fenty, That Long-Awaited Album & Trump. At the Bel-Air, a hostess shows me to a small courtyard table tucked behind the trunk of a century-old sycamore. 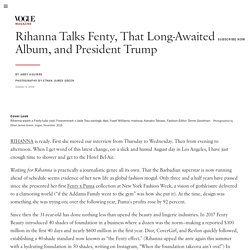 I’m sitting under its dappled canopy when Rihanna arrives. She sweeps in quietly, enveloping the area and probably the swans outside in an invisible cloud of her famous scent—an intoxicating olfactory assault that, in the words of Lil Nas X, “literally smells like heaven.” (The internet has decided it’s a Kilian fragrance called Love, Don’t Be Shy, which contains notes of neroli, orange blossom, and marshmallow.) We order Champagne. It’s safe to assume Rihanna is wearing makeup—her own Killawatt highlighter and Stunna lip paint, perhaps—but I can’t say for sure, because her face is a radiant palette of natural tones. Normally I bring a list of questions, but I didn’t have time to prepare one, which I make a split-second decision to confess. Luc Besson praises Rihanna's work ethic - RIHANNA ONLINE.

Director Luc Besson says getting Rihanna’s team on board for her role in the sci-fi epic Valerian and the City of a Thousand Planets was a little painful at first. 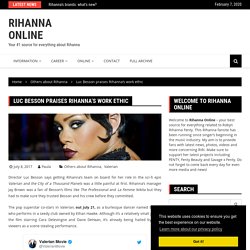 Rihanna’s manager Jay Brown was a fan of Besson’s films like The Professional and La Femme Nikita but they had to make sure they trusted Besson and his crew before they committed. The pop superstar co-stars in Valerian, out July 21, as a burlesque dancer named Bubble who performs in a seedy club owned by Ethan Hawke. Although it’s a relatively small part in the film starring Cara Delevingne and Dane DeHaan, it’s already being hailed by early viewers as a scene-stealing performance.

Rihanna, who wasn’t available for an interview, was the director’s first choice for the pivotal role and he figured it couldn’t hurt to ask. She’d had a role in the 2012 film Battleship and the animated Home, and cameos in This Is the End and Annie. Once the Grammy winner’s team decided to move forward, Besson said Rihanna “was lovely.” Rihanna's Work Ethic Should Be A Lesson For All Of Us - 29Secrets.

The last few days have been massive for our god and hero, Rihanna. 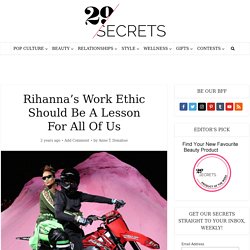 After launching Fenty Beauty last week, she returned to NYFW to debut another Fenty x Puma collection, which delivered scuba and motocross-inspired vibes and cemented the singer/designer’s reputation as a risk-taking, interesting, creative, and unstoppable force. And no one is surprised. In 2017, work ethic is social currency. We want to seem busy, to talk about everything we’re up to, and to paint ourselves as the hardest-working people on the planet. Which, like, fair: as everything else is crumbling down around us, work seems like the one thing we can still control. I take solace in working a lot. Rihanna - Biography. Biography, Music, Movies, & Facts. Rihanna, byname of Robyn Rihanna Fenty, (born February 20, 1988, St. 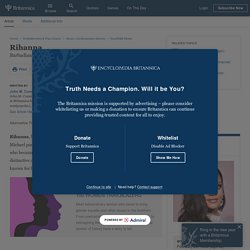 Michael parish, Barbados), Barbadian pop and rhythm-and-blues (R&B) singer who became a worldwide star in the early 21st century, known for her distinctive and versatile voice and for her fashionable appearance. She was also known for her beauty and fashion lines. Fenty grew up in Barbados with a Barbadian father and a Guyanese mother. As a child, she listened to Caribbean music, such as reggae, as well as American hip-hop and R&B. She especially enjoyed singing and won a high-school talent show with a rendition of a Mariah Carey song. With the effervescent dancehall-inflected single “Pon de Replay” (2005), Rihanna immediately captured an international audience.