Colleges urged to screen more for depression. For many young people, the excitement of attending college is often followed by the stress brought on by new challenges. 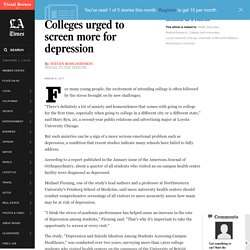 "There's definitely a lot of anxiety and homesickness that comes with going to college for the first time, especially when going to college in a different city or a different state," said Mary Ryu, 20, a second-year public relations and advertising major at Loyola University Chicago. But such anxieties can be a sign of a more serious emotional problem such as depression, a condition that recent studies indicate many schools have failed to fully address. Half of college students consider suicide - Health - Mental health. More U.S. College Students Die from Suicide Than Alcohol-Related Causes, U.Va. Researchers Find.

Listen to the UVA Today Radio Show report on this story by Marian Anderfuren: November 4, 2011 — Suicide outpaces alcohol as a cause of death among college students, according to the first study in more than 70 years to look at the major causes of college mortality in the United States. 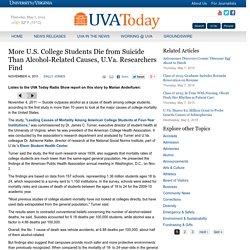 The study, "Leading Causes of Mortality Among American College Students at Four-Year Institutions," was commissioned by Dr. James C. Turner, executive director of student health at the University of Virginia, when he was president of the American College Health Association. It was conducted by the association's research department and analyzed by Turner and U.Va. colleague Dr. Turner said the study, the first such research since 1939, also suggests that mortality rates of college students are much lower than the same-aged general population. The findings are based on data from 157 schools, representing 1.36 million students ages 18 to 24, which responded to a survey sent to 1,150 institutions. Suicide.pdf. Addressing suicide among seemingly successful college students - philly-archives. 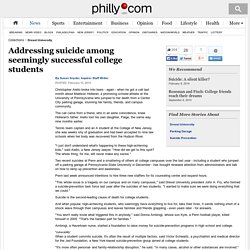 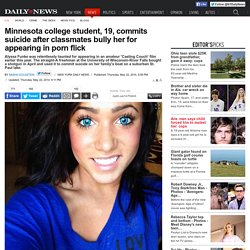 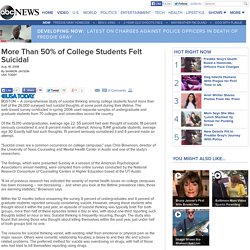 "Suicidal crises are a common occurrence on college campuses," says Chris Brownson, director of the University of Texas Counseling and Mental Health Center in Austin and one of the study's researchers. Within the 12 months before answering the survey, 6 percent of undergraduates and 4 percent of graduate students reported seriously considering suicide. On a brother’s suicide: ‘I wish I had never told him to go to counseling’ Ian and Cassie Smith-Christmas. 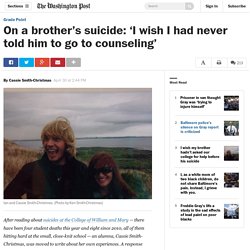 (Photo by Ken Smith-Christmas) After reading about suicides at the College of William and Mary — there have been four student deaths this year and eight since 2010, all of them hitting hard at the small, close-knit school — an alumna, Cassie Smith-Christmas, was moved to write about her own experiences. 2011's Most Stressful Colleges. Suicidal Thoughts Among College Students More Common Than Expected. College students facing depression need more than a list of doctors to call. A recently released survey of 150,000 college freshmen found that 9.5% had frequently felt depressed in the last year, up from 6.1% in 2009. 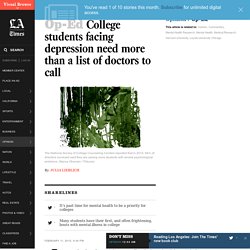 As such numbers rise, some colleges balk at the idea of being "caretakers" for their psychologically fragile students. But ignoring the mental health of freshmen has serious consequences, as I know firsthand. I started out strong my first year at Sarah Lawrence College almost four decades ago. I landed the lead in a play and signed up for a heavy course load. Within weeks, I was sitting in my room without the energy to return a book to the library. SuicideAmongCollegeStudentsInUS.pdf. Bullying in College. So what is Bullying in College? 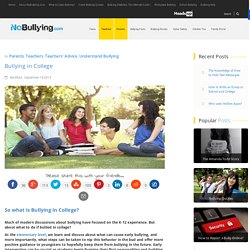 Much of modern discussions about bullying have focused on the K-12 experience. But about what to do if bullied in collage? At the elementary level, we learn and discuss about what can cause early bullying, and more importantly, what steps can be taken to nip this behavior in the bud and offer more positive guidance to youngsters to hopefully keep them from bullying in the future. Early intervention can be crucial as students begin forming their first personalities and building social skills in the K-5 years. At the middle school level, the problem deepens as students sometimes are just moving into puberty and abstract thinking. At the high school level, bullying can be even more advanced. Then is all bullying done when the final bell rings or the final graduate crosses the stage at commencement?