David karp. Tumblr 'truly disappointed by Twitter's decision' to block friend-finding on the blogging service. Tumblr is the latest company to respond to the strict guidelines found in Twitter's new API terms. 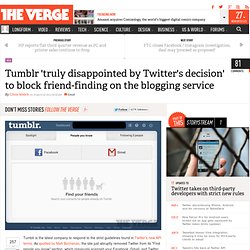 As spotted by Matt Buchanan, the site just abruptly removed Twitter from its "Find people you know" section, which previously scanned your Facebook, Gmail, and Twitter friends/contacts, matching them with users on the Tumblr microblogging platform. Now only the former two services remain. Instagram was forced to take similar action last month, axing Twitter from its own friend-finding capabilities after the massively popular photo app was blocked from utilizing the necessary APIs. Neither company has explained the reasons behind this most recent change, but the timing certainly suggests a direct link to new policies that dramatically alter how third parties can interact with the Twitter service. 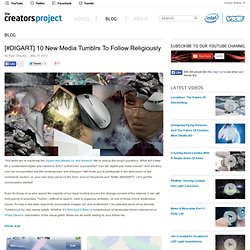 We’re asking the tough questions: What will it take for a sustainable digital arts market to form? Is that even a possibility? Can the digital arts make money? And will they ever be incorporated into the contemporary arts dialogue? We invite you to participate in the discussion in the comments section, on your own blog (send us the link!) Even for those of us who spend the majority of our days hunting around the strange corners of the internet, it can still hold plenty of surprises. Phone Arts. Why We Are On Tumblr. We recently launched our Marketing Land and Search Engine Land accounts on Tumblr. 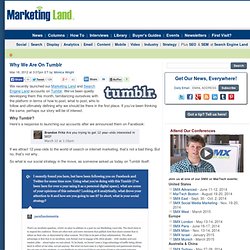 We’ve been quietly developing them this month, familiarizing ourselves with the platform in terms of how to post, what to post, who to follow and ultimately defining why we should be there in the first place. If you’ve been thinking the same, perhaps our story will be of interest. Tumblr Is Not What You Think. Editor’s note: Adam Rifkin is co-founder and CEO of PandaWhale, an online network of interesting things and people. 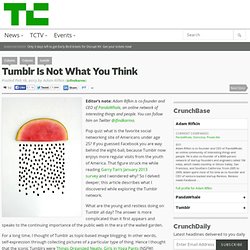 You can follow him on Twitter @ifindkarma. Pop quiz: what is the favorite social networking site of Americans under age 25? If you guessed Facebook you are way behind the eight-ball, because Tumblr now enjoys more regular visits from the youth of America. That figure struck me while reading Garry Tan’s January 2013 survey and I wondered why? A New Policy Against Self-Harm Blogs. Follow-up: Tumblr’s New Policy Against Pro-Self-Harm Blogs. Tumblr Office Tour.

Daniel Goodman / Business Insider Here is the office of Tumblr, the super fast growing blogging platform that may be inspiring Facebook and has big plans for the future. 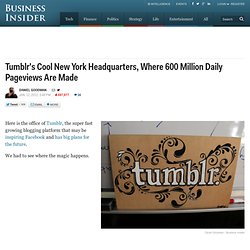 We had to see where the magic happens. Tumblr Takes Fight Against SOPA Up A Notch, ‘Censors’ User Dashboards. Congress is in the process of kneecapping the web as we know it with a House bill called the Stop Online Piracy Act (a similar bill, called the Protect IP Act, is in the Senate). 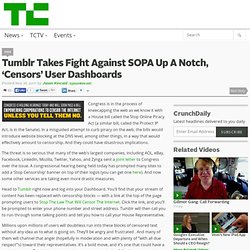 In a misguided attempt to curb piracy on the web, the bills would introduce website blocking at the DNS level, among other things, in a way that would effectively amount to censorship. And they could have disastrous implications. The threat is so serious that many of the web’s largest companies, including AOL, eBay, Facebook, LinkedIn, Mozilla, Twitter, Yahoo, and Zynga sent a joint letter to Congress over the issue. A congressional hearing being held today has prompted many sites to add a ‘Stop Censorship’ banner on top of their logos (you can get one here). Community Managers At The Hottest Startups.

Tumblr Talking To Top VCs About An $800 Million+ Valuation. Tumblr rolling towards hitting 10 billionth post soon. Although it easily could have turned into a random social media site lost among a sea of similar speedy blogging platforms that have emerged in the last year, Tumblr hasn't tumbled. 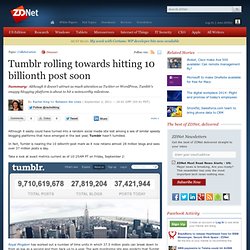 In fact, Tumblr is nearing the 10 billionth-post mark as it now retains almost 28 million blogs and sees over 37 million posts a day. Take a look at exact metrics current as of 10:25AM PT on Friday, September 2: Tumblr Hits 20 Billion Total Posts. Tumblr has hit a major milestone — 20 billion posts — a huge increase from the 12 billion posts figure it reached in November. 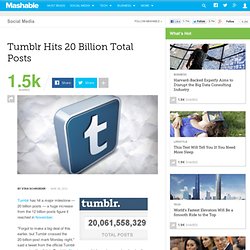 "Forgot to make a big deal of this earlier, but Tumblr crossed the 20-billion-post mark Monday night," said a tweet from the official Tumblr account, with a link to Tumblr's About page, which sports a counter showing the total number of Tumblr posts. Currently, the number sits at more than 20 billion posts, 51 million of which were created today. Tumblr currently has more than 49.7 million total blogs and is due to hit the 50 million milestone any day now. 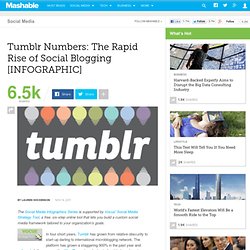 In four short years, Tumblr has grown from relative obscurity to start-up darling to international microblogging network. The platform has grown a staggering 900% in the past year and eclipsed platform competitor WordPress, largely due to its global reach and brand-building potential. Those under Tumblr’s influence are fiercely loyal — with 2% of users making up 43% of total visits — and they log in from all over the world. Take a look behind the scenes at Tumblr’s influence on the web, including top tags and fun facts, in this handy infographic. Infographic designed by Emily Caufield. 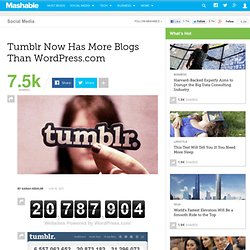 In January, Tumblr had more than 7 million individual blogs. At the time of this writing, the total blog ticker on its site read about three times that at 20,873,182 — beating out WordPress.com's current count by about 85,000 blogs. WordPress.com's count doesn't include sites that people host themselves with the open source software via WordPress.org, but given that the hosted service had about a four-year headstart, surpassing it in number is still an impressive feat for Tumblr. Web : Tumblr, un «Twitter» multimédia, lève 30 millions de dollars. «One more thing… une dernière chose…» C'est avec cette réplique, désormais culte, que Steve Jobs a coutume d'introduire la dernière invention d'Apple lors de ses présentations.

Tumblr: A Growing Search Acquisition Opportunity for Brands. While search engine result pages (SERPs) may be constantly evolving, one facet of search that has withstood the test of time is basic acquisition strategy. Most marketers understand that if you control as much premium space on Page 1 as possible that the users will inevitably follow. This concept of SERP control strategy is one that has been referred to as the Digital Shelf strategy.

It is an analogy to the shelves in the grocery aisle – just as CPG retailers position themselves as efficiently and effectively as possible on the shelves at the grocery store, so do online marketers on SERPs. "Tumblr" now a more popular Google search than "blog" “Tumblr” has officially surpassed “blog” as one of the most searched terms on Google. Tumblr overtook blog in December for the first time since the microblog network was started in February 2007, tweeted Laura Olin, a social media director. According to Google's search stats, the word “blog” has been on a decline since May 2009, which is around the same time Twitter became the third highest ranked social network according to visits. Staff - 100 million. Comment devenir Mister Tumbler man. Avec 4 milliards de pages vues fin 2010, le service de blog aux fonctionnalités sociales a explosé dans le monde entier.