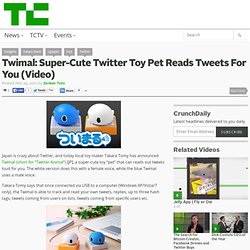 The white version does this with a female voice, while the blue Twimal uses a male voice. Takara Tomy says that once connected via USB to a computer (Windows XP/Vista/7 only), the Twimal is able to track and read your own tweets, replies, up to three hash tags, tweets coming from users on lists, tweets coming from specific users etc. It’s also possible to operate two Twimals at the same time and change the way their voices sound. Promo video (in Japanese): The Twimal will be available in Japan starting March 31 (price: $31) – if you’re interested ask specialized online stores like Rinkya or Geek Stuff 4 U (I am not sure how good the Twimal is in reading tweets in English though). 8 Bright Concepts for Portable Gadgetry [Slideshow] Technology helps you have what you need with you at all times. 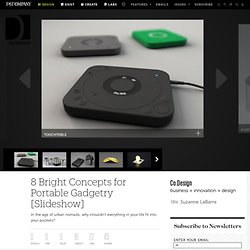 Computer, phone, iPod, keys, wallet, e-book? By now, all of these items can fit in a small bag (or maybe even a pocket of some XL pants). Wires and "workstations" are outdated; we know that electronics don't need to be stationed at your desk, locked in a maze of wires. MORE/REAL Stylus Cap by Don Lehman. Hi Internet! 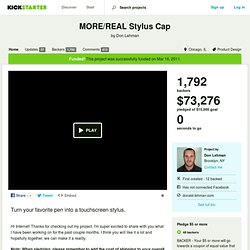 Thanks for checking out my project. I'm super excited to share with you what I have been working on for the past couple months. I think you will like it a lot and hopefully together, we can make it a reality. Note: When pledging, please remember to add the cost of shipping to your overall total. Shipping in the US is $5, to Canada is $10, and International is $15.

Questions? Works with iPad 2. How Can I Recover Data from a Dead or Erased Hard Drive? China Could Supplant U.S. as the Supercomputing Superpower. China’s Tihane-2, the world’s top supercomputer. 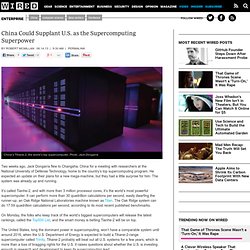 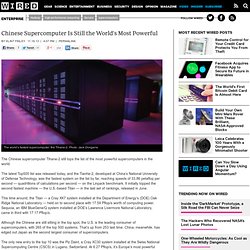 Photo: Jack Dongarra The Chinese supercomputer Tihane-2 still tops the list of the most powerful supercomputers in the world. The latest Top500 list was released today, and the Tianhe-2, developed at China’s National University of Defense Technology, was the fastest system on the list by far, reaching speeds of 33.86 petaflop per second — quadrillions of calculations per second — on the Linpack benchmark. Your Next Computer Will Live on Your Arm. Thalmic Labs co-founder Stephen Lake building the Myo. 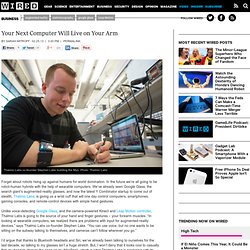 Photo: Thalmic Labs Forget about robots rising up against humans for world domination. In the future we’re all going to be robot-human hybrids with the help of wearable computers. We’ve already seen Google Glass, the search giant’s augmented-reality glasses, and now the latest Y Combinator startup to come out of stealth, Thalmic Labs, is giving us a wrist cuff that will one day control computers, smartphones, gaming consoles, and remote-control devices with simple hand gestures. Unlike voice-detecting Google Glass, and the camera-powered Kinect and Leap Motion controller, Thalmic Labs is going to the source of your hand and finger gestures – your forearm muscles. I’d argue that thanks to Bluetooth headsets and Siri, we’ve already been talking to ourselves for the last decade, so talking to my glasses isn’t a huge stretch. 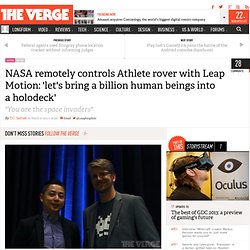 "We're going to drive this robot, on stage at GDC, with a Leap Motion device. " In an unexpected demonstration at the 2013 Game Developers Conference in San Francisco, scientists from NASA used the Leap Motion to control a six-legged, one-ton Athlete rover located at the space agency's Jet Propulsion Lab in Pasadena, California. Using his hands in front of a Vaio laptop on stage, Luo raised one of the Athlete's legs as the crowd at the Moscone Center watched along via a live Google+ Hangout.

And while this demonstration was impressive in its own right, NASA's ambitions reach much further than the 383 miles to Pasadena. "It happened in this hallowed ground of the living room, a place we'd like to be again. " "I want us to build a future of shared immersive tele-exploration. " Nouvelles interfaces - Les Echos. TKR＠tumblr.